Weekend Question: What browser games have you lost the most time to?

This week the question is: What browser games have you lost the most time to?

Kongregate has stopped accepting new games, and Flash's "end of life" is six months away. Before they're gone, what browser games did you play the most? Was it Slither.io or Agar.io, or those web versions of PopCap games with the exclusive levels? The Last Stand or Line Rider or QWOP? Did you play the OG versions of Meat Boy and Canabalt back in the day?

Refresh your memory with our list of the best if you need to.
Reactions: XoRn and SWard

Oh man I've spent so many hours being paid to play flash games in my life, which may explain my career progress.

For me it's a toss up between The Last Stand: Union City and Kingdom Rush, which started my love affair with tower defense. Both series are actually still going, Kingdom Rush Vengeance came out only last year and Google tells me that there's a new Last Stand game coming to Steam early access next year.

So Jody, what do I need to pull in order to get The Last Stand: Aftermath up in the 'Popular' quick bar on the PCG site? I'd love to see it squeeze in between Cyberpunk and Death Stranding.
Reactions: PCG Jody and XoRn

Probably have a couple of hundred hours between my favorites: Surviv.io, Zombroyale.io, Town of Salem, Wings.io, Slither.io, Gartic.io, and Runescape. I also played a lot of stickmen, zombie survivors, and speedrunner games years back. Speaking of Town of Salem:
😁 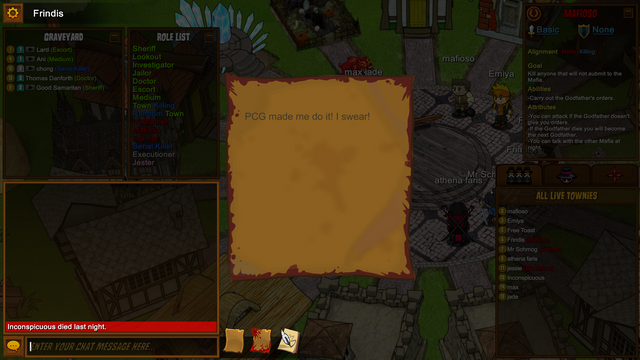 Adventure Quest. I even paid to get a premium account. I think I reached somewhere around level 60-70.

I probably would be playing it more if it didn't need flash. I once tried using a flash browser on my phone, but that didn't work very well.
Reactions: Oldgamer777, XoRn and Rensje

Yeti Sports! Pretty much the entirety of my ICT classes in secondary school were spent playing this rather than doing anything productive or interesting.

@Rensje Pretty sure I at some time played an uncensored version of Yeti Sports
Reactions: Rensje

At first I thought, "What? I've never played 'brower games'," but then I looked at the list, and...

Anyone remember when Rust launched from a browser? That counts, right? I think that's the only one I've got, but man I put a lot of time into it back then.
Reactions: XoRn

@drunkpunk How was it to play Rust back then through a browser?
Reactions: Rensje

Lost a lot of time in the .io universe but recently its been CS 1.6, ive lost a good day or 2 in the last 2 weeks to it.
Reactions: Frindis and Rensje
D

Frindis said:
@drunkpunk How was it to play Rust back then through a browser?
Click to expand...

It was a much different game back then, but it worked really well. You could full screen it so it felt like a launched exe or the window would be contained within the browser. I enjoyed it quite a bit back then.
Reactions: Frindis
S

I used to spend way too much time playing Happy Wheels.
Reactions: Pifanjr

Adventure Quest, even though I'm not a big fan of browser games.
Reactions: Pifanjr

Thanks for the answers, everyone! Here's the article: https://www.pcgamer.com/what-browser-games-have-you-lost-the-most-time-to/

Late for the article but I don't care, still answering the question

I played so much Tribal Wars. Was fun in the start, hated in the end, got P2W. Still, a world could run for several years (one I played ran for 8 years) so you're teaming with the same tribe for years, creates good friendships.

Thing I hated most (and do about all online games) is if they keep running if you're not there. A lot of games your character / world won't progress when you're not on. I hate games where you may have lost everything you have while you were offline.
Reactions: Pifanjr

Most of the time has been spent on Elder scrolls, and occasionally lapsing back down memory lane to Baldurs Gate. I am beginning to want a new experience, and fancy trying Death Stranding, but not sure if my Laptop Spec is up to it.
A