New to the forum and to gaming in general. Starting a new adventure into Pc Gaming with my son.

Wrapped the case in white vinyl as it was looking a little tired.

What have I done right or wrong? Always looking to learn and don't want to embarrass myself with doing something stupid 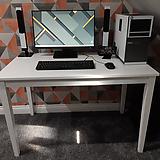 Welcome to the forum (and PC gaming)

The photos are coming out very, very small when I click them. You could upload images to imgur and link here.

Your setup looks really neat and clean from what I can see though.

The potential catch with using refurbs o this kind as gaming PCs is the same as buying just about anything 2nd hand, which is that you're buying hardware that may already have seen several years of service and often has no warranty to speak of. Also OEM PCs like Dells, Lenovos, HPs, etc, especially ones for mass use in offices, often have proprietary parts / connectors which can make further upgrades a pain or prohibit them. If they fail then it can be a bit more of a pest to fix because you need a very specific bit, though you often find motherboards and other spares on ebay too (again, used). It is possible to swap things like motherboards or even the case but that can involve different levels of additional DIY.

None of that's a criticism btw - ultimately it all depends on the price you got it for, and how much service you get from it before you decide or need to replace it.

What sort of games are you into so far? Are you gaming with each other on the same PC (local coop)?
Reactions: Inspireless Llama

To add to Oussebon's comment, I do think that this PC is decent for gaming on 1080p with medium settings, considering it's 8GB of RAM instead of 8MB .
I also think this is a good option to do if you're new into gaming and you're not sure yet if it's actually going to be used. I've adviced against buying a 2000$ gaming PC if it turns out only to be used as an office PC after 3 months. I think this is actually a precent decent start.

Unfortunately I think that not only do mass-built PC's usually use their own components, often components that should be able to get replaced can't or you may have a hard time with it. They often use very specific forms (the motherboard for this PC may look entirely different over a "normal" one. So it's not just the connections, it may be the entire layout. Or it's so small that (re)placing a component may block other components from benig used (I experienced that when I had an Acer prebuilt).

Also power supplies may or may not be an issue. I think for these kind of PC's power supplies will be designed specifically for this PC and without the need for extra connectors on them, they may be missing ones you'll need for an upgrade.

I can't really tell wether upgrades can be done or not, but I think it does require alot of research and often some tweaking too.

But I do think you'll be able to game decently on this PC for a while! Just don't get your expectations too high, you won't be able to connect it to a 4k tv and get a fluent game, and you can't expect to play the newest games on their highest settings.
Reactions: Oussebon

I didn't look at Optiplex 9020s but I was recently looking at 9010s and 7010s and a few others and the motherboards were regular form factors, and had regular 24-pin connectors for the PSU and 4-pin for the CPU, and the PSU was a straight swap too, but the proprietary bits were the front panel and power connectors, CPU fan header, it had some strange thermal sensor, and one or two other bits too.