Question What was the first PC game that you bought or played?

What was the first PC game that you bought or played?

First game I played was probably some golf game we had on a work pc in the 1990's. I think it was one of the Links games
First PC game I bought was Simcity 3000. I know as I got it a few days after my first PC

Note: only PC games, anything else will be removed
Only comment if your game isn't already in the poll
if your game is included above, simply voting is enough.
Reactions: Apriyansyah, Lukmanulhakim, FourTwo and 8 others

I think I played a demo of Hocus Pocus as my first PC Game. I really can't remember which my first to buy was though.

Lol, OG Doom. I'm 34, begged parents to let me get game on midnight release, one of my best memories and oldest memories in gaming. I wasn't even 7 till January!
Reactions: jeshyt, riswan indarso and Anjar99

Doom II OR Interpla's Battle Chess - can't remember which one.

Both came with first PC my family bought, the seller even was nice enough to showcase cheat codes which I had no idea what kind of magic they even were.

I still remember learning MS-DOS by exploring the files and folders more than I did explore Windows 3.11 that was also installed.

First PC game I bought? Damn that's tricky one. If we're not counting the full versions that were add-ons to magazines... damn I have no idea.

I remember the first one I was really proud and excited about tho! Baldur's Gate , whole saga. So many CDs! So many pages of manuals! Maps! Goodies! 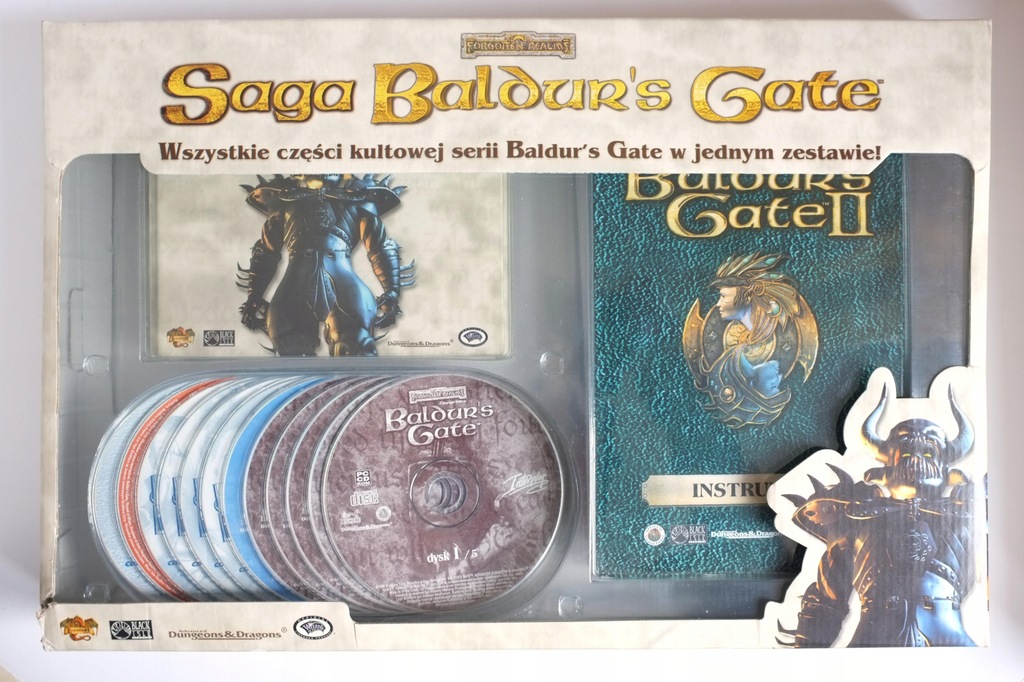 Photo not mine, somebody's is apparently selling one of these. I still have every damn item from it.
Reactions: Apriyansyah, Lukmanulhakim, jeshyt and 1 other person

Colif said:
First game I played was probably some golf game we had on a work pc
Click to expand...

Hah, same here! Except it was late 80s; the grapevine whispered that a colleague had a golf game on his PC, and sure enough…

The first games I bought were after I got my own PC in '90. I was into the shareware by mail scene and bought a bunch in my first splurge—ones I can recall for sure:
Battle Chess
Commander Keen
Indiana Jones
Kingdom of Kroz II
Kings Quest
Leisure Suit Larry
Loom
Mah Jongg Solitaire
Prince of Persia
Psion Chess
Sim City
The Secret of Monkey Island

PS they all arrived on 5.25" floppy disks, even tho the 3.5" floppy was more popular by then—but they all worked, no DOAs
Last edited: Jun 10, 2021
Reactions: Apriyansyah, Lukmanulhakim, jeshyt and 3 others

Alm said:
I think I played a demo of Hocus Pocus as my first PC Game. I really can't remember which my first to buy was though.

I think either Hocus Pocus or Raptor was the first game I played.

First to buy for me might have been Morrowind, after I saw it at a friend's house and I just needed to play it myself.
Reactions: Alm

Since i am being technical and classifying PC as IBM clones and their off spring, and not Personal Computers like they existed before IBM made theirs, I have to ignore fact I couldn't tell you the first computer game I ever "owned" although ownership was more of having a copy on a floppy drive, overwhelmingly not having the actual hardware to play said games. It was just about having them back in the early 80's, and they weren't animated games yet. First game I bought might even have been on a Tandy Colour, I don't know for sure.. we had one of those long ago.

but that is really off topic since this is IBM PC.
Reactions: Krud and Apriyansyah

Can't really remember that far back. Myst came with my first pc, does that count?
Reactions: Apriyansyah and Brian Boru
P

Almost forgot, in early 90s as a young boy in school, we would play games like Number Munchers and Oregon Trail and a typing game called Mavis Beacon I believe.. But Wolfenstein and Doom were my first I bought, well my parents bought them for me...
Reactions: Apriyansyah, Brian Boru and Alm

The first PC game that I bought & played was the Ultima Trilogy 4, 5, 6; so technically Ultima 4 as it was the first game in that trilogy. It affected how I perceived PC gaming, and truly hooked me on the RPG genre. It wasn't just about shooting, stabbing, looting, and leveling up; it was about the story, your character, and choices that changed the world around you. And, man, I loved cloth maps (still do). 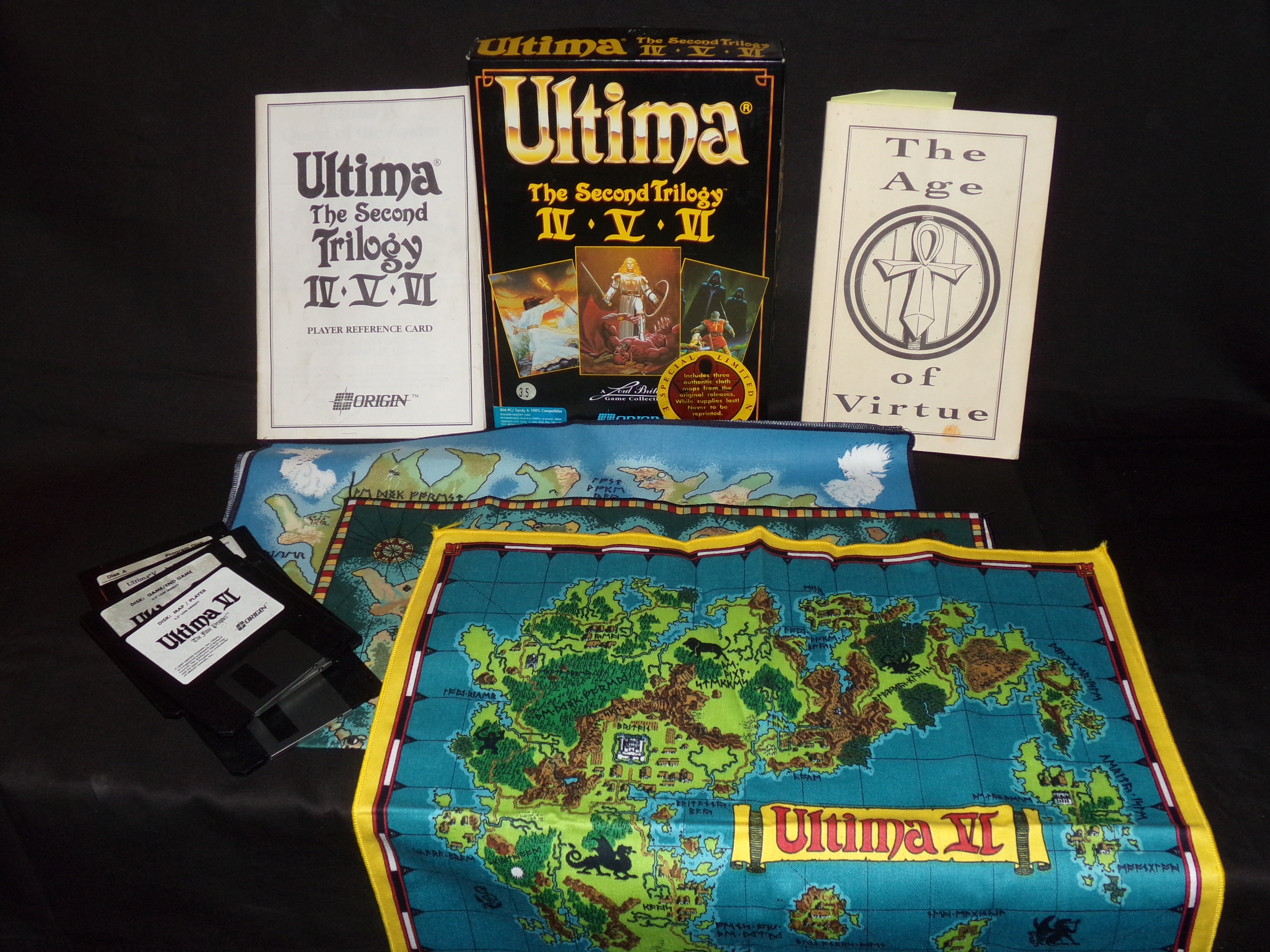 The first pc game that I played was Warcraft, but before playing Warcraft I've played Plants vs Zombies. Finally I like playing strategy games.
Reactions: Brian Boru
E

The Oregon Trail (1985) on Apple II was the first I played on a computer. Can't remember if it was at school or the public library,

my first windows PC game was either soldier of fortune-special edition (a very good FPS) or superbike 2000.
me and my sister had a commodore 64 between us back in the eighties which technicaly woud be first PC as it was labelled as one, but im not sure if its everyones idea of a PC.
Reactions: Brian Boru

The first game I played on a PC was a PES 2017 soccer game. It was thrilling

I don't remember what the first PC game I played was. Something text-based, for sure. Maybe Colossal Cave Adventure (precursor to Zork.) Though that may have been on an Apple II or something, so I'm not sure that counts.

The first PC game I bought, however, I definitely remember. It was the very first King's Quest. I didn't even own a PC yet, but my grandma did, and we'd visit her almost weekly back then, and my friend Tim had a version of King's Quest that had come with both 5 1/4" disks and a DOUBLE DENSITY(!) 3 1/2" disk, but his PC couldn't use the 3 1/2", so he sold it to me for ten bucks. (Probably not technically legal, though it's been over 30 years, so I'm not too worried.)

The first PC game I bought at full price, on my own, was Sid Meier's Covert Action in 1990.
Reactions: Pifanjr, Zloth and Brian Boru
F

Considering how fuzzy my childhood memory is, i think it's a two-way tie between Operation: Inner Space and Commander Keen.

Keen's probably a more remembered name in this forum so i'll go around explaining Inner Space instead. At first glance, it's a clone of Asteroids. In fact, there isn't much to do during the first folders you play besides shoot asteroids (yes, actual folders in your computer). However, as you play through the third wave onwards, you find yourself squaring off against rival factions trying to gun your ship down for a few extra computer icons (in-game currency) and getting in trouble with the law because it's illegal to steal the gift box that gets jettisoned out of an exploded ship. But I'm sure you won't have too many troubles with the law. After all, isn't that why you bought that box of donuts?
Reactions: mainer, Krud, Pifanjr and 1 other person
You must log in or register to reply here.
Share:
Facebook Twitter Reddit Tumblr WhatsApp Email Link