What Is The Best Weapon You've Ever Used In A Game?

I suck at shooters, I suck even more at Battle Royale. That all changed last night when I discovered the M13 thanks to @Frindis and the Warzone thread.

In the space of five minutes I went from chump to champ - sliding around corners, making incredibly cool quips (well to me at least) only I could hear and blowing up a car. I became the avatar of 80's action movies laying waste to faceless mooks. That got me thinking, everyone has had that flash where a gun or sword clicks in a game, that "this is me" moment where everything falls into place - what is yours?

What is the best weapon you've ever picked up in a game? Did it transform you into a better player, psyche you up or just feel great to use?

Quick edit: Sure the second game I used it I got put in my place by a guy with a pistol, but for one glorious game I was a god.
Reactions: Sarafan, McStabStab, Frindis and 1 other person

Gunblade. Like, not even close. Such a dope weapon.
Last edited: May 7, 2020
Reactions: Subvertcity and Mknott

In Ultima Online, at the height of the animal taming tree, you could tame white wyrms - these giant, powerful, magical dragons that could kill in a single hit. At one point in time, I summoned all the guild leaders to a "peace summit" at my guild's headquarters. They gathered around the conference table, and we discussed how to solve our issues diplomatically. At my left and right were a set of tamed white wyrms whom our mages had casted invisibility on using magic rings. As talks concluded unsuccessfully, I released the tamed wyrms from our control, which made them wild, and immediately began a massacre of guild and alliance leaders.

One of the best weapons I have ever used in a game has to be the Super Shotgun from Doom 2. It was my favorite weapon to use both in solo and deathmatch. Honorable mention goes to Borderlands 3 Hellwalker. A kick-ass double-barreled shotgun that even plays tiny parts of Doom (2016) BFG division soundtrack when you shoot with it. How awesome isn't that!
Reactions: Sarafan

The land shark gun from Armed and Dangerous.

Other games have done it since but this was my first.
Reactions: I Will Haunt You

The Big Effing Sword in Lo Wang's hands. No, not that thing - the katana I mean! 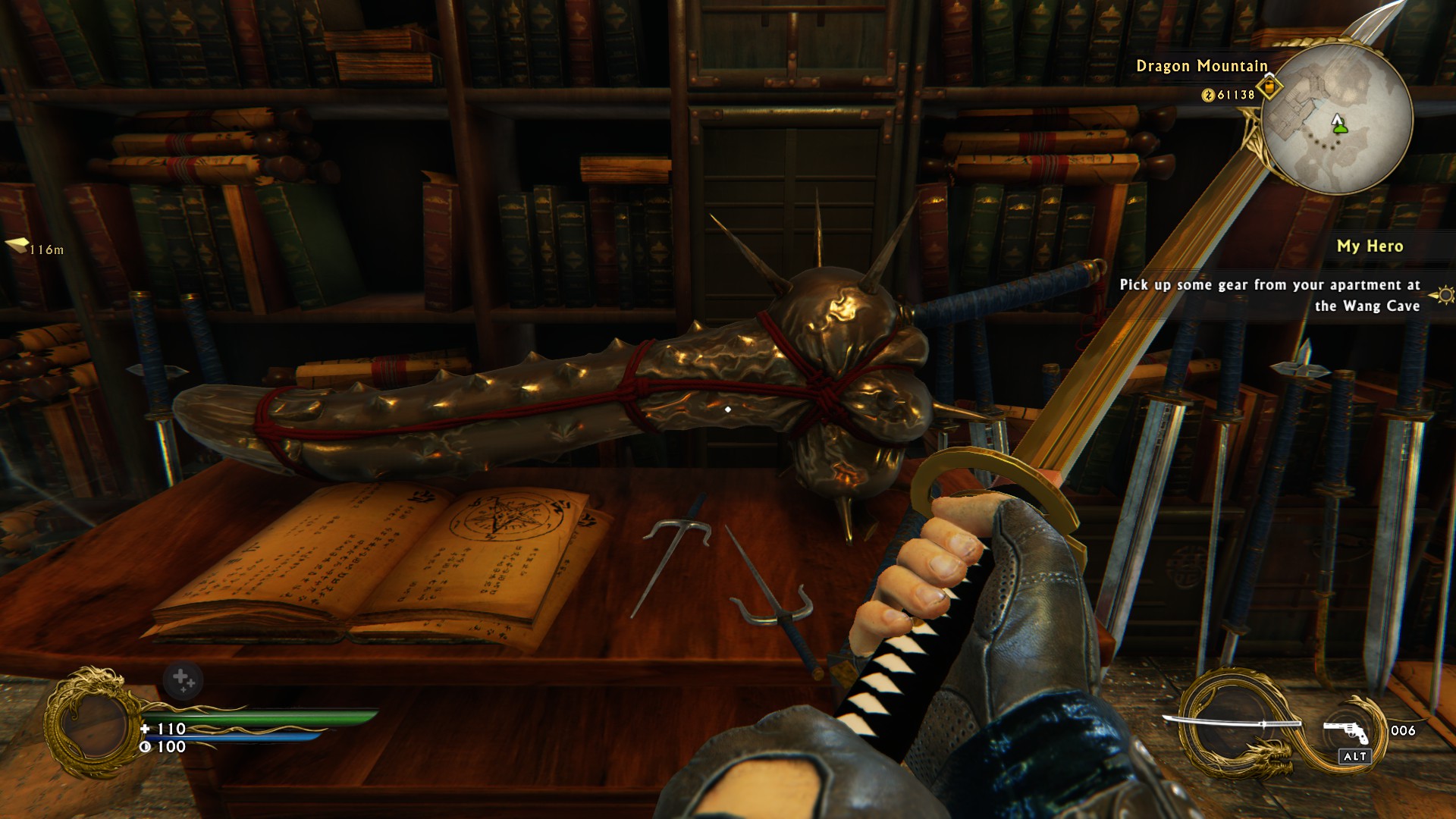 The Boltor in Warframe is all kinds of awesomesauce. Stock it is an automatic rifle that perforates your enemies with foot long spikes and pins their corpse to the wall. It was one of my favorite guns the moment I unlocked it, but where things get fantastic is Warframes implementation of mods. Add multiple spikes fired per shot, increased fire rate, increased crit chance and elemental damage suddenly your gatling fifty lighting rods in a wall of death every second.
Reactions: Mknott and I Will Haunt You

Is it cheating to say the Portal Gun? I absolutely love the feeling of jumping off some high ledge and shooting a portal out below you right before you crash into the floor, then stringing together a series of fast portals as your free-fall momentum is redirected at different angles, finally landing you at your goal.

As far as offensive, damage dealing weapons go, I think I have to choose Halo 3's Battle Rifle. After many hours of practice in multiplayer, you could settle into a flow. Pulling off that perfect "four-shot", or dropping an opponent in one quick burst to the dome after popping their shield with a well-placed grenade. Even returning to Halo years later it doesn't take long to shake off the rust.

Zoid said:
Is it cheating to say the Portal Gun?
Click to expand...

Considering the number of times my son and I used the device to bring about an early demise to each other in coop in Portal 2 I would certainly classify it was a weapon.
Reactions: Aristarchus and Zoid
P

anything you can hit things with in skyrim, cause being an enchanter breaks the game.
Reactions: McStabStab

There are incredibly satisfying gun builds in Escape from Tarkov. Sometimes when you kill a PMC and steal their kit, the first time you fire their weapon can even be surprising. The sound, the new recoil pattern, etc.

Ya know most people would say some kind of awesome gun or a sweet sword. My personal favorite that always stuck with me was the burps and farts from booger-man on SNES. Still cracks me up to this day.

My favorite weapon that I've used in a game is probably the Dubstep Gun from Saints Row IV. Thing's a blast (no pun intended).

I think it was a Barrett M99 in Crossfire's game. The feeling that you can take down any enemy with just one bullet is amazing 👍👍

The Gloo Gun from Prey. I don't really do combat, but a gun that shoots giant balls of sticky goo I can get behind.
Reactions: Bierbarbaar, OsaX Nymloth and Sarafan
A

The Recycler Charge in Prey. You toss it like a grenade, then stand-back and watch as the bad guys, nearby trash, even furniture gets sucked into your mini black-hole and pops out as crafting items. Love it!
Reactions: Pifanjr, Bierbarbaar, Hveðrungr and 2 others

I'd say Double-Barrelled Shotgun from Quake 1. It kinda sucks on longer distance, but up close it's a really nice tool that combines accessibility (lots of ammo available) with firepower. During all of my Q1 runs I used it to the very end.

Another interesting weapon of my choice are the Bladez of Zaibatsu from Shadow Warrior 2. Great swords which allow for massive mob killing. All they need to do is stand in line and the blades will pierce through them like a hot knife through butter. Nobitsura Kage from Shadow Warrior 1 had similar properties.
Reactions: OsaX Nymloth
T

Knife in Blood 2. It got better the more you used it so if you didn't use any other weapon it was really OP.
A

Not sure I should go into detail, but the pistol in Postal.... With the silencer... If you cat-ch my drift

Blades of Chaos, and Blades of Athena, God of war 1 and 2 respectively!
H

turn off lights 100-200 yards iron sights no problem. take out snipers & rocket launching sentries without alerting camp no problem. 8 shot clips that reload from the drops of fallen enemies no problem. bring the dragunov also. use the makarov to draw out them out and the dragunov to make them hide or drop with the wounded. take the pkm for crowd control. insanity level, no problem.