While exploring Junkspace, you are likely to run into a cambot. Once a popular and cost-effective all-in-one security solution, they still guard company's property blissfully unaware of decades passed

Only one of the options gets you what you need, but all of them have skill-checks. Fail, and it may get you in trouble.

How to make the informed decision? Explore, gather information or use perception check to read NPC's personality profile.
Reactions: Mazer

Not the part where you step on one - that's just annoying. But I really like the creative tactical solutions they provide.

In Space Wreck you can place mines. Be careful though, once it is set it does not magically recognize you - it will detonate on anybody indiscriminately.

Mines can, of course, be disarmed. It is a SCITEC skill roll and if you fail. Well, you've got 2 seconds to get away

…but if you succeed, you can pick up disarmed mine for yourself and place it wherever you need it.

Silver lining if you step on one - they leave reusable parts behind, so not completely a waste of hp.

Nothing major, just adjusted the tone, the colours for secondary DOS themed colour scheme. I think this nu blu is easier on the eyes. 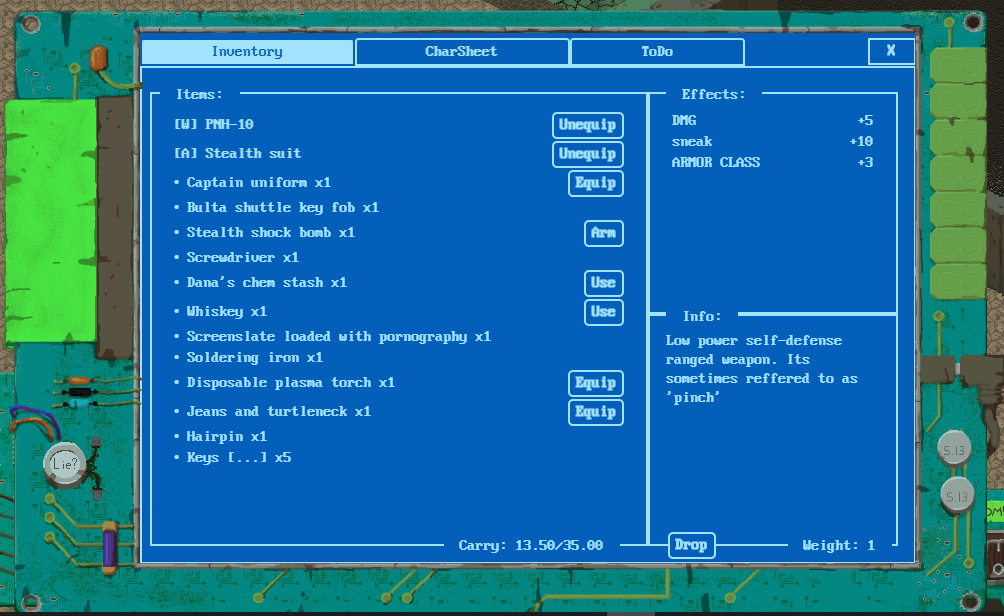 I also switched to a more readable font, I think. Previous one was cool but all-caps is probably not the best choice for reading lots of text. And we got lots of text 42k+ words of text as of now.

For the reference - this is how the DOS theme looked some time ago, with eye-burning blue and all-caps font:

Playing Fallout, I was blown away first time I realized you can set a timer on a bomb and reverse-pickpocket it on NPC. And blow it up!

So, naturally, I had to have it in my game as well!

I have implemented a simple item condition system.

Some items - mostly weapons, armour and tools - have condition parameter that affects their performance and longevity. The condition wears down with each use of an item - shot for weapons, application for tools and received hit for armour. Item that reaches condition 0, turns into a Junk. Weapons also lose damage proportionally (currently DMG = baseDMG * (0.5 + condition/200)).

You can repair items with lower condition instances but for that you have to have at least average (3/5) tinker skill. If not, you'll most likely throw away deteriorating guns always looking for one in better condition.

Special note is about condition 100, or, as I call them, pristine items. These items are basically new, unused or with minimal wear. They would not deteriorate any further. The idea being that items with condition below hundred are old and used, while new items wouldn't break down in the near future.

I do realize condition is not universally liked in RPGs, plus, original Fallouts did not have it in any form, it was only New Vegas that had in game. But, I have decided I want condition in Space Wreck because of these two reasons:

Need to be more perceptive to read this person? Want to ignore some pain? Not enough speed..err..action points? No problem - there are drugs now in the game now!

Just, so you know, there are are drawbacks. Some stats go down but...in expense for others, so better plan ahead. And be careful - there can be subtle side effects...

Fortunate are those space wreck dweller communities that have old, tiny, banged up and leaking but still running shuttlecrafts. It grants precious freedom to scavenge, trade and migrate in Junkspace.

Apparently I came to the wrong neighborhood :/

Like in tabletop RPG, skill checks are dice rolls and can go either way, affected by both your character build and luck. To accentuate this important part of the game play, we've added a prominent animation -

Initially I was shy to shove these under-the-hood mechanics in player's face but then I saw how Larian is doing just that in their Baldurs Gate 3 and decided to not hold back myself. I like dice rolling in RPGs, because

One another thing - these skill checks can be fairly important. Like in this example success and fail lead to self-excluding quests and, potentially, diverging plot. Idea being that FAILURE is just as cool RPG experience as SUCCESS and you should accept it as just different, interesting twist to the story.

P.S. I understand that not everyone wants this level of meta gaming in their RPG, so there's a toggle in settings, to switch it off, along with skill tags in dialog choices (`[CHARM] Wanna talk about it?`)
V

Cool Stuff here, Thanks for sharing this games, I really like it and advice for children. See also https://bitlife.onl/

Minebots - actually space mining equipment, are used to work extracted and processed space ore. Even though these machines float in microgravity, they posses surprisingly large mass and are propelled by small rocket engines. That is why ordinarily human personnel is not allowed to work alongside the minebots - it is just too dangerous.

If you want to get rid of a character or need an item it is holding, murder is not the only option. For example, while he's not looking, you can spike his drink with sleeping pills

I am working on quests, so there's not much to show of that. However, here's small visual update to one of the maps:

Asteroid ore hauling rockship showing heavy damage to the bow. Tiny speckle in the middle there is you.

While I'm working on quests without much of a visual output, the artist is updating older assets, like this shuttle: 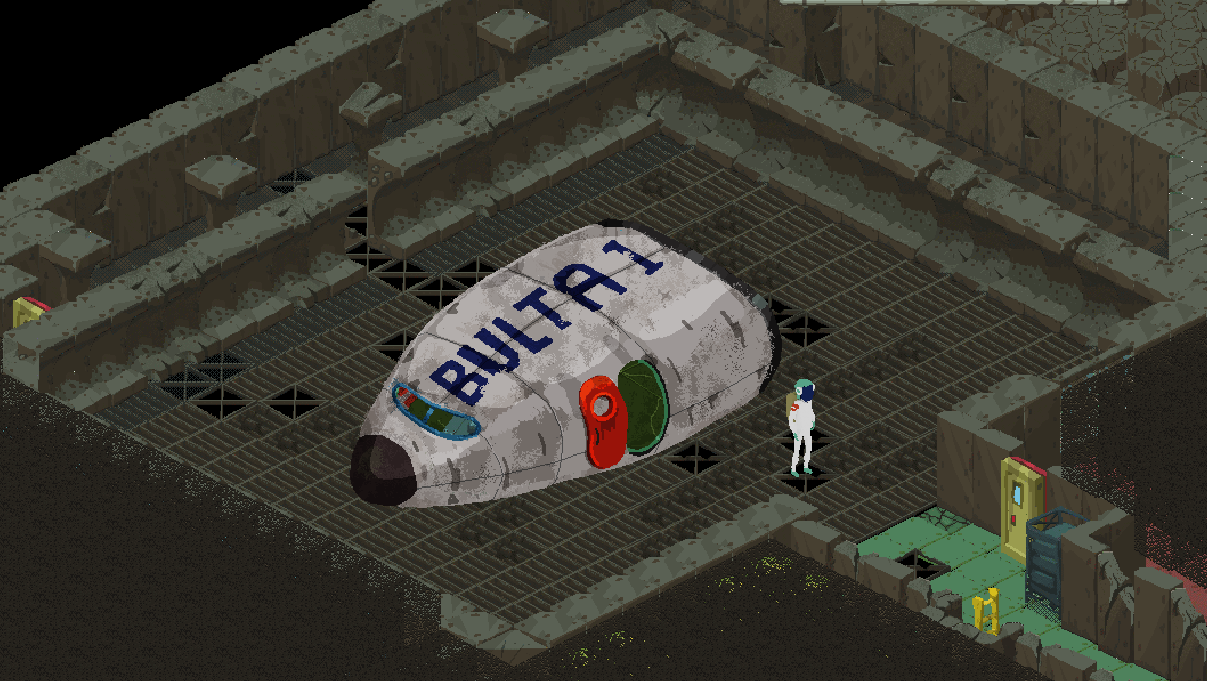 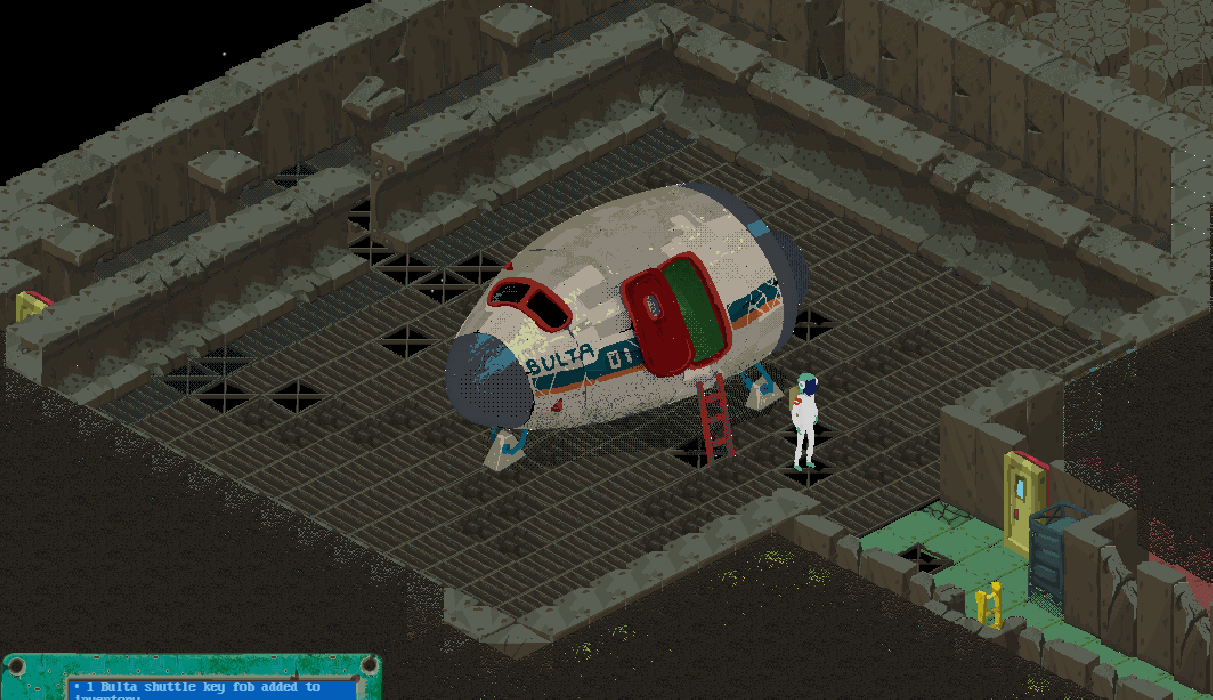 In two and a half minutes I try to broadly explain what this post-apocalyptic space role-playing game "Space Wreck" is all about. There's also plenty of fresh visuals in the video.

A very short clip from the intro sequence we've been working on. Shows you arriving to the starting location - wreck of the rock ship KURBADS.


(If you watch with sound on, you'll get a sense of atmosphere I am going for)

Another short animation clip from the intro movie: main protagonist (player) arrives to the wreck of the rock ship KURBADS in a small shuttle.

The tiniest thing, really - you can ask NPCs to move aside. However, whether they will comply - that depends on your SPEECH skill roll.
Reactions: Franky

My brother suggested I might like this forum. He was totally right.
I play Fantasy football , btw

Sneak peek into the new ...uh....sneak peek system. Principle is simple: the better your sneak skill, the smaller NPC detection area. If you step into their FOV, roll for each tile.

Actually, it's the difference between your sneak skill and NPC's PERCEPTION attribute that determines the extent of the FOV field. However, when you step into the FOV, your sneak is rolled against NPC's FOCUS. Then there's also the concept of alertness - NPCs can have level of alertness and what it means is that sneak roll has to fail multiple times before NPC spots you. The less alert they are, the more forgiving they are (hence FOCUS). Also, if you are sneaking past some non-hostile humanoids, your CHARM plays a role as well - it decreases or increases NPCs alertness depending on how charming you are. If you are likable person (high CHARM), they will be more lenient, however if you are repulsive bastard (low CHARM), they'll be looking over your shoulder all the time.

Major changes to the combat flow - now there are no "basic" attacks anymore - you always have to make a decision as there are multiple options with nuances. Kind of like JRPG a bit.

In the GIF you can see two ranged options: STEADY SHOT and QUICK SHOT. This whole combat rework stems from the combat problem in Fallout - at some point I realized that the best strategy is to run to your enemy close and then shoot her/him/it in the eyes. Max out precision and damage. While it does not take away from the enjoyment of Fallout, I decided to try to mitigate this problem in my version. That's where the STEADY SHOT and QUICK SHOT flow comes in.

STEADY SHOT is actually your base shot, without any modifiers. (At least, at the moment.) It is quite deadly if successful (a lot of damage and char HP is usually low). But the caveat is - you can use it only if you are standing still, actually, if it is your first action in the turn. As soon as you spend some AP, you cannot have STEADY SHOT that turn. You can shoot and then move, sure, but shot must come first. The logic being that you must be steady when discharging a weapon, not moving or reloading or smth.

QUICK SHOT however is available at any time, yet it is less efficient (half the precision or damage - I am working it out atm). But then, again, it costs only half the AP of a STEADY SHOT, so you could squeeze twice as many in one turn.

So, if you see an enemy, you now have the option to either shoot it from the distance or run closer to it and then attack with better hit chance. However, if you do so, your damage/precision would be significantly limited and, if you fail to land the killing shot, you will find yourself in compromised position close to the enemy who now can just take a full power/precision STEADY SHOT at you (which could kill you instantly). And then retreat with spare APs. On the other hand, if you keep your distance and try STEADY SHOT, you engage with an enemy in a firefight which - to me at least - seems a bit more realistic and interesting. That's also where your skill prowess comes in handy - if you have higher RANGED skill or/and PERCEPTION, you'll have an edge. Then, again, if you have a lot of AP and EVASION, you might still try rushing an enemy, because you could do a lot of QUICK SHOT's per turn and just overwhelm your opponent with bullets.

That's my reasoning. And that's actually the whole point I changed the system to JRPG-like combat menu. Those now offer more possibilities, not only for shots but MELEE skill as well. But more about those some other time.

Last week I introduced the combat menu and how it can offer you tactical options besides basic attack. This time the story continues with the SHOVE mechanic.

Canonically in Space Wreck gravity is simulated on off world ships and stations by magnetic shoes and ferromagnetic surfaces where possible. However, should you detach from said surface, you'd be floating in zero-G (that's why knocked out characters can be seen floating in some previous GIFs). In combat this can be used to your advantage - if you pass a MELEE skill roll against opponents EVASION difficulty, you can hurl your adversary across the room until it will crash into something. While this is more of a positioning move, upon contact with e.g. wall, enemy will suffer a damage that is proportional to his/hers current carry weight - in other words - more loot in inventory, more hit points will be lost.

Possible uses: a great way to put some distance between you and your foes or a way to prevent being surrounded. Or just, you know, shoving off

Evasion is not exactly automatic - if you end turn with action points to spare, every 2 of them grant you a roll. Or you can use COUNTER move proactively, to be ready for an attack and retaliate on success.
You must log in or register to reply here.
Share:
Facebook Twitter Reddit Tumblr WhatsApp Email Link