Bow play—what games do it well?

I ignored bow play for a long time, until Far Cry 4 Primal. Such a beautiful world, but with no guns, it was either learn to use a bow properly or be sabretooth lunch. Now I always seek out the bow in a game. From the limited number of games I've played:

If you're unfamiliar with bows, they usually have these main attributes:

1. Fully silent. Unlike suppressors / silencers on guns, a bow will not give away your position to nearby enemies.

2. Recover ammo. Run over the kill and get your arrow(s) back—but not explosive or fire of course, they're consumed. If you miss a shot, look for the arrow.

3. Double skins. Games with foraging and crafting sometimes give double skins from wildlife you kill with an arrow. In some games you lose that if you wounded it with a bullet first, other games care only about the kill shot.

4. 'Bullet drop'. It varies by game but your arrow usually loses height as it travels—similar to sniper bullets in sniper-focused games. Many bows have distance lines in their 'sights' which might help—I don't like how they obscure the target, so I prefer to initially mess around with local wildlife to get a feel for the arrow action.
Anyone know of a game with wind effect on arrows?

5. Occupy rifle / shotgun slot. The main drawback of a bow is if you can't have a main assault weapon also. I've had this in 2 sniper games recently, but hadn't seen it before. Sometimes you need to take down 3-4 guys quickly, and a bow can't do that.

If you want to learn bow play, I recommend Sniper Ghost Warrior 3. I found it the surest shot—put top indicator on target = hit for anything up to ~100m.
Downside is you lose your AR slot—there are only 3 weapon slots, and 2 are occupied by SR sniper rifle and PDW eg pistol. Still, for a stealthy gameplay, bow is great.

Either of the bows in Far Cry 5 New Dawn—I prefer the Blood Dragon bow because I don't like those distance meters obscuring my view of the target.

FC5 ND has a leveling system for both players and weapons—don't go up against a Level 3 cougar with a Level 1 rifle. When you get the bow to Level 3, and have explosive and fire arrows as extras, you'd have to shoot yourself to lose—or have homeboy Hurk with his rocket launcher as a companion, that'd do it too. So the bow is anti-air, anti-vehicle, and anti-personnel and wildlife all in one.

There is distance drop which kicks in early, so you'll need a few practice rounds with the local deer to get the hang of it.

They say you never forget your first. FC4 Primal is the bow I've enjoyed most. Has a quicker reload than others, which enabled my best moment with a bow—3 headshots on 3 running attacking Izila warriors. Sweet!
Reactions: ZedClampet, Febiar, Bayu Braders and 6 others

Kingdom Come: Deliverance.
For when you really want to see how tough it is to actually use the damn bow. At first your character will hurt itself before anything else. Aiming rectangle? Never heard of!

First time when I had to hunt some hares I spent probably like 10 arrows trying to hit one of them, standing still and mocking me among a small forest of arrows.

Even later after hours and hours of gameplay, I would still miss a shot. But hey I could reliably hit a nest!
Reactions: Frindis, zuQy, hendry yanto and 2 others

I think Crysis does a good bow game, esp. Crysis 3, comes in handy when staying cloaked and trying not to be seen, allows you to pin guys to walls or together etc., sounds good too.
Reactions: Frindis, zuQy, hendry yanto and 1 other person

I've always enjoyed the bow in Skyrim. Especially with the kill cam when you manage to kill something over a large distance.
Reactions: Frindis, Ulwan, Yggdrasill and 4 others
J

Far cry comes to mind. Hunt animals/people is easy peasy. Tomb raider wasn't bad either. any other ones? nothing that stands out tbh. I used it in skyrim/oblivion but i never levelled it up properly and but felt kinda weak.

Honorable mention to the classic thief series. Weapon and utility tool combined. Need to put a torch out? use water arrow. want to sneak across a noisy environment? use a moss arrow. Want a rocket launcher? Fire arrow etc etc.
Reactions: Pifanjr and Brian Boru

I'm with Pifanjr on using bows (and crossbows) in Skyrim, I most always play some type of archer character. Great for stealthy kills and also dragon fights. 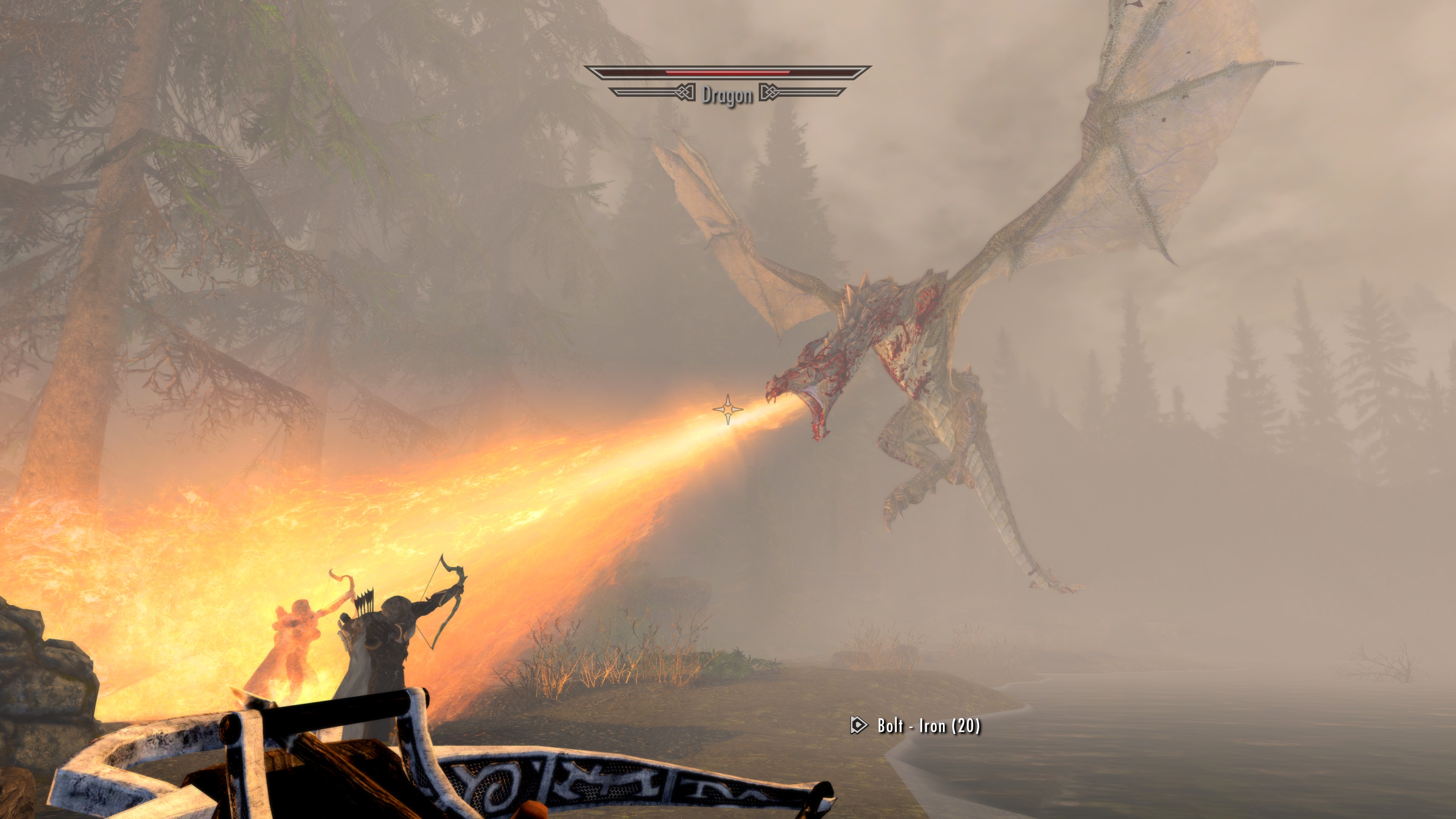 Also, I love the bows (and crossbows) in Divinity Original Sin 2, getting your archer to high ground you could really unleash devastation. 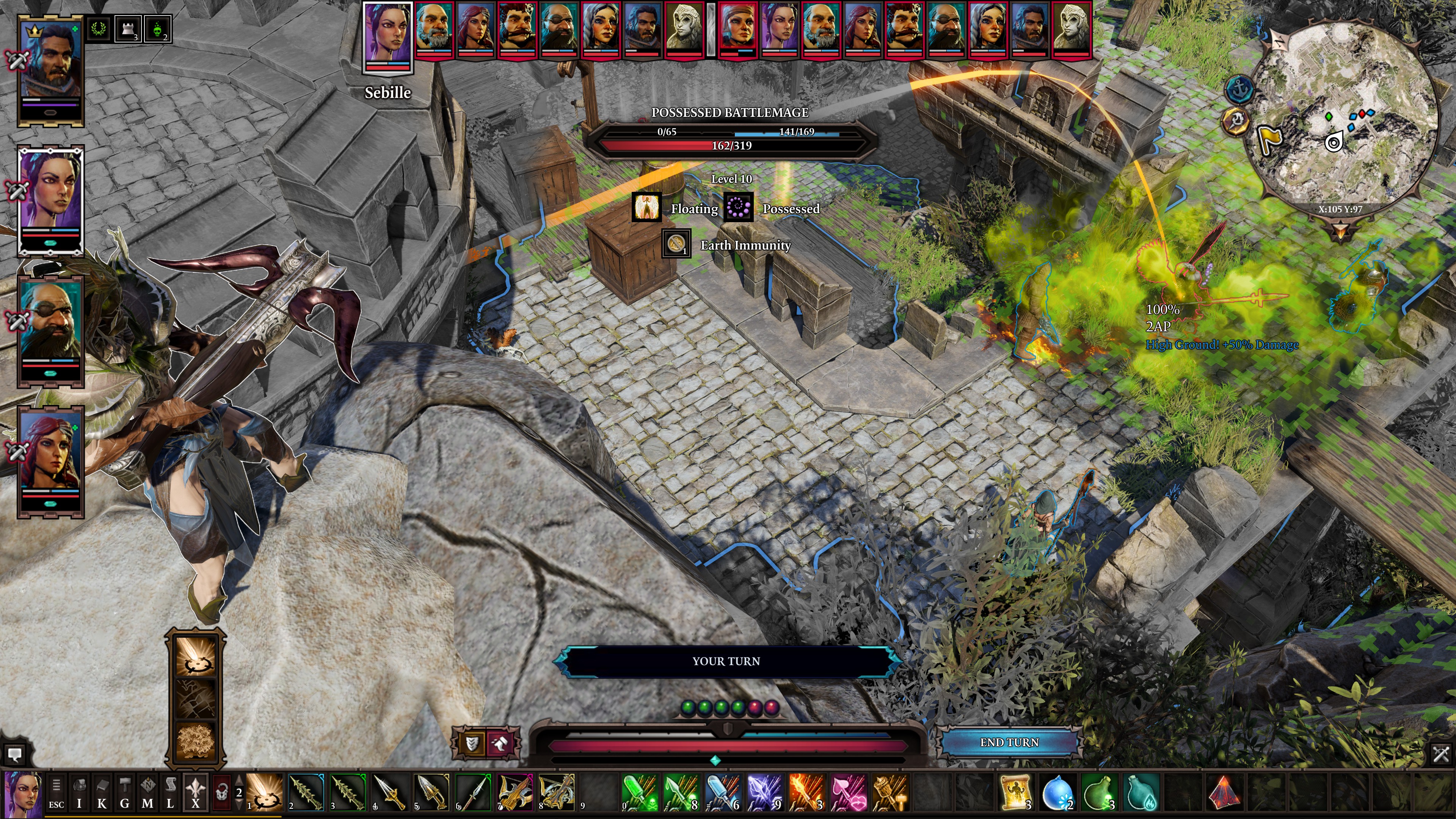 And the bows in Elex can be leveled up and improved, as well as leveling your character to use them, if you join the Berserker faction, almost to the point of being overpowered. 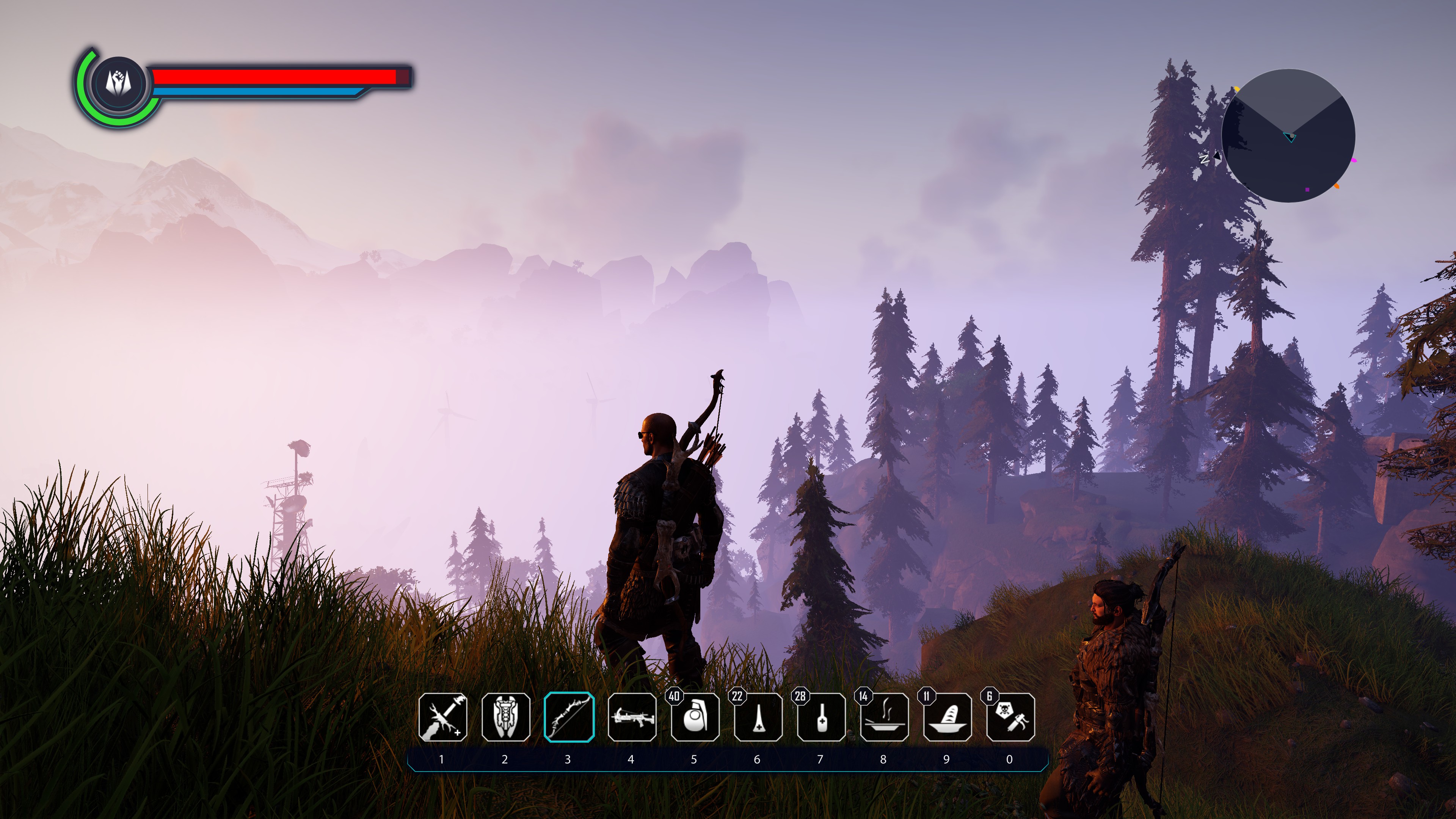 Wii Sports was my favourite, but I don't think that counts here .
Reactions: Frindis and Pifanjr

Noone else really does bows like the Far Cry games, I'm on record as previously having a problem with how OP they can get in those games but given the franchise reputation for power fantasies I can hardly fault them for giving you powerful options for abusing cultists and militants.

Bows have been pretty cool in the last few Assassins Creed games, particularly with the slowdown you get from aiming in mid-air. They're also a sign of how much the franchise has changed given their very deliberate exclusion from the early games due to Ubisofts concerns that they'd trivialise the stealth gameplay by allowing long-distance assassinations and remove the need for the social stealth systems they were still pushing.

Kingdoms Of Amalur: Reckoning had a pretty full skill tree for bow users. Lots of cool stuff like an AOE rain of arrows or shotgun-like scattershot, combined with elemental effects of magic bows and the addition of poison or bleeding damage from complementary skills. Probably not enough to base an entire build on, but since you could use two weapons they could be paired with anything from daggers to a greatsword for mixing melee.

Strategic RPGs often struggle to make bow gameplay as interesting as other, more magical ranged options, even if they were basically essential to survival for a low-level party in BG1, but I hear a lot of people love their archer builds in Dragon Age Inquisition.
Reactions: Frindis, Pifanjr, mainer and 1 other person

The only other game that has come to mind with satisfying bow play, that hasn't been mentioned yet, is Dark Messiah of Might and Magic, in large part because it allows you to pin enemies to the wall.

Most of the time, bows just make my eyes roll. They aren't bows, their laser blasters. You put the little dot where you want the arrow to hit, fire, and it hits right on the dot. (And, with a controller that has aim correction, it isn't even as hard as that.) Treat them like a silenced rifle where you might be able to pick up bullets and re-use them, because that's what they are.

Kingdom Come: Deliverance has excellent bows. Thief does, too, for most ammo types. (The magical stuff flew in a straight line.) You actually need to practice a little bit to get the hang of them!

Red Dead Redemption 2 is making itself hard to classify. Arrows hit right on the dot but, if you watch the trajectory, I think the arrows follow a proper arc. (I wonder if there's a setting for turning that aim assist off?)


Pifanjr said:
The only other game that has come to mind with satisfying bow play, that hasn't been mentioned yet, is Dark Messiah of Might and Magic, in large part because it allows you to pin enemies to the wall.
Click to expand...

You should only use that when you've grown tired of kicking things.
Reactions: Pifanjr and Brian Boru

Zloth said:
You should only use that when you've grown tired of kicking things.
Click to expand...

It's definitely not the most satisfying part of combat in the game.

I really love the bows in Valheim. They are really difficult to use because of the amount of drop that they have, but I think that makes them pretty fun.

Bows are pretty useful in Conan Exiles, as well. They have a decent drop to them, but not as much as Valheim. You can also use them for different things; for instance, you can put different tips on them for doing stuff like knocking people out or starting fires. It's really the best way to knock out your future thralls.

I usually use bows in all the Far Cry games until I get to the point where I can get a more powerful sniper rifle with a silencer on it. Bows are generally OP at the beginning of the game, and they have very little drop, so they are super easy to use. I actually like them better than the sniper rifles, but usually the enemies eventually get to the point where they can survive the bow. I never played Primal, though. Overall, I like the bows that have drop better than the Far Cry bows, but Far Cry's are still fun.

As far as realism goes, The Hunter: Call of the Wild has very realistic bow physics. I have only used them a couple of times though because I'm not great at getting up close to the animals. I tend to shoot from over (often well over) 100 yards and bows just aren't that great for that. The crossbows are incredibly powerful, though.
Last edited: Aug 17, 2021
Reactions: Pifanjr, Frindis, Brian Boru and 1 other person

For anyone who needs aiming assistance: 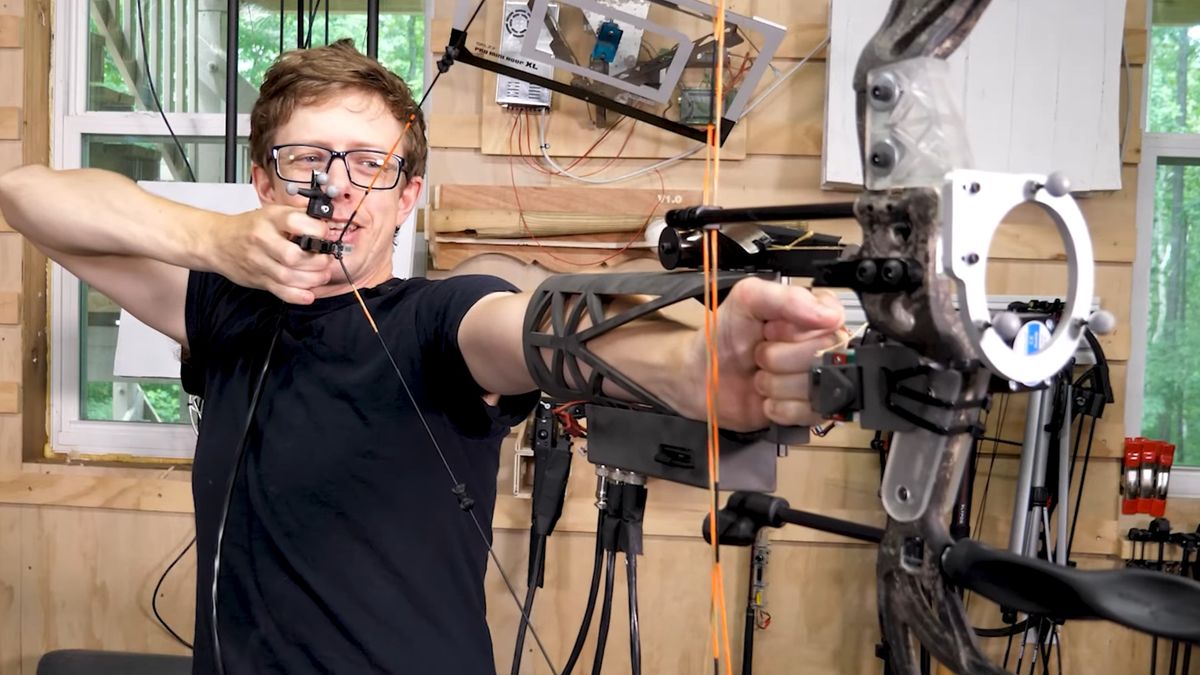 This guy made a real-life aimbot

The closest we'll get to a wearable Crysis guy suit.

I think Skyrim did it well. A lot of the bows looked cool with the Nightingale bow being my favorite. Not complicated to use, but a lot of fun. I used to play the majority of the game using a bow, together with my companion, Aaela the Huntress, which looked really noice in all dark leather and a bow.

Crysis 3 had a really cool bow. I don't think you could change the skin/bow, but it had different attachments, which made it strong. The "bow drag" sounded awesome in that game.

Rust also comes to mind. It is very hard to use the bow properly since it got drop and because you for the majority of the time attack real players. Once you learn to use the regular bow, crossbow, and compound bow, you are a threat to be reckoned with. The "bow drag" sounds particularly awesome on the compound bow and the release sounds just awesome. You can also get different skins on the bows (unfortunately not for the compound bow yet) which makes using them just a bit more personal.


Here is a short clip showing an excited player using the compound bow in all its glory.