Hey guys, first post so I apologize if I am not asking this in the right forum.

I would like to get into PC gaming for the first time, but I do not know anything about PC parts. I don’t have the knowledge or time to build a PC.

I’m willing to drop a solid $1500 on a complete pre-built PC. Does anyone have any recommendations?
R

picking a prebuild can be worse experience then finding components to build a new one from the ground up.
J

You could grab something like this. It's better than the comp i'm using by a good margin. (though should be sorta on par with the one i'm building. It cuts a few corners, but in the right spots i think. for the price it would be a very solid gaming system for the next 5 years. MSI is a trusted brand and makes quality parts. 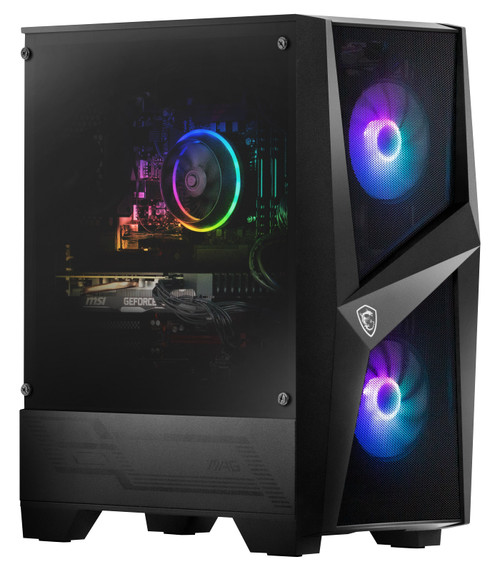 
The vid card along can run people 700+ at this point in time. the chip is a little on the lower end side, but it should run everything just fine, it turbo's up to 4.3 which is nothing to sneeze at and enough cores for any modern game including strat games. You might have some issues finding stock atm, but if your not in a rush just wait they should come back sooner than later.
J

I'll add some more basics.. Specs and parts/build to look for

Storage, You really want a 1T SSD for your main drive, But often systems come with a 500GB, If you can upgrade that to 1TB do it. I highly discourage going smaller than that. to me 1TB is the sweet spot right now for price and use.

HDD, I prefer going with an HDD as a secondary drive over a second SSD. Mainly for cost, but also for storage space. You can grab a 4-8 TB drive for around 100 at this point in time. I use it for most of my games and for backup and larger files. I always put a game on my HDD first. I load it up and if it loads pretty quick and runs fine off this drive i leave it. If i find it takes forever to load, or has lots of load screens in the game that take more than a second or two i swap it over to the SSD. The main reason is for space, but also it is a secondary drive at this point. So if i need to format and refresh the main drive, aka the SSD, all my stuff just stays nicely on this drive and is not effected by reinstalling the system. (sometimes it is a good thing to refresh a system)

One last thing about storage, If you have the option to just get a 1TB SSD do it. Getting a large HDD after the fact is super easy to install on a desktop. a screw driver and plug in a couple of wires. 10 mins on youtube will make it very simple for anyone to do these days. it's all just plug and play.

Parts. I realize some people have preferences, but here are some brands and i have used for 20+ years and not had issues with them, Sure a failed drive here and there, or a bad stick of ram but it happens on occasion. Over all these are solid parts. (i build lots of comps for me and other folks so your bound to have a bad part from time to time, typically it is bad on install verse going bad.) But these companies i have always had good experiences with CS when something has gone wrong which is important so a replacement is easy when if it does happen.

For vid cards and mother boards, (typically the maker of the computer) MSI, ASUS and Gigabyte are all good companies


If you see these brands in the pre-builts you are looking at, they can be good systems. But if you find something you are consitering it doesn't hurt to make a post and get some thoughts on it.

One last thing a company like newegg will actually build your custom system for you. You pick out all the parts and they assemble and test it for you and send it off for a small fee. I think its about 100 dollars as of last i checked. When vid cards are back in stock this could be the way to go. in the mean time finding a pre-built is going to be a bit harder, though end of jan or feb they should be getting things back in stock.

That might price up to around 1700 and be a very solid system.. Skim down a little on things and you are talking a little over 1k and still a extremely powerful gamer that will last you at least 5 years.
Last edited: Dec 31, 2020
Reactions: Zloth and Brian Boru


JCgames said:
You really want a 1T SSD for your main drive
Click to expand...

I strongly recommend an external backup drive, which is usually kept disconnected from the PC—your safeguard against something zapping the PC's internal storage, eg I've had a couple of motherboards blow over the decades.

I have a lot of software, someone who's using a PC mainly for gaming will be fine with 128GB. I like to keep my system & programs SSD small so it's nice and quick to run disk images and various scans which a system disk can benefit from.

1TB games SSD so I don't have to keep uninstalling the ones I replay periodically.
R

Just remember that if you get a new system, you want to make sure you have a motherboard that isnt going to need replacing the next generational change drops for your chosen brand of CPU.

dont even worry about a backup system yet. You can get external USB backups at walmart for 50-100$ based on size. And even with backups, a smalelr size is better as even backups fail.
L

Honestly man you can build your own PC with no prior knowledge.

I learnt myself on YouTube. Just think of the parts on adult lego. It is so simple i promise you.

If you build your own rig you will get a lot more for your money.

largeGAMER said:
It is so simple i promise you.
Click to expand...

It does however require a couple of personal characteristics:
The ability to understand & follow instructions carefully;
A temperament which won't take a hammer to the motherboard when first problem arises.
L

Brian Boru said:
It does however require a couple of personal characteristics:
The ability to understand & follow instructions carefully;
A temperament which won't take a hammer to the motherboard when first problem arises.
Click to expand...

Hahaha yeah if you are a hot head with i smash things sorta thing it may not be for you.

But honestly it is very straightforward. I am very inpatient and i wouldn't say i am the brightest, but i get by with this just fine.

OP, watch some videos online about builds and see what you think.

If the $1500 is a hard limit, I would pull the video card back to a GTX 1660. Your monitor will probably be a 1920x1080 so that should still be pretty good. If you end up liking gaming a lot, you can update the video card then buy another monitor with higher resolution (and keep the existing one as a second monitor, assuming you've got space for it).

Oh, and I'm not sure what your sound situation is. You can plug in headphones (be sure to get a case with headphone jacks you can get at easily) or plug in some speakers. If you need to buy some, that's more $$$.

(And yeah, it's confusing. This is where the console folks get a leg up. You go to the store, you buy a brand, then you buy the games with that console's name on the box. Super easy. We get back in the lead with our mods and flexibility.)
Reactions: Brian Boru
J

I agree with the whole 1660 TI to save some money. It is a perfectly good card and would pair nice with the rest of the build.


As for comps vrs PC, To me it's all about what you want to play. I would say 3/4 of my library is only available on the PC. Though with recent console versions more of them are swapping over, but for the longest time if you played strat games you only have one choice. Now that that is closing a bit, now it's more about what the companies are making that you play. I also play a lot of indy adventures, anime, hidden object and honestly lots of others that will never see the light of day on a port.


So welcome to the OP, you will have 1k's of new games that you could never play before, and many of them are pretty old, but nothing wrong with that. Check out a little game called Freedom force.
You must log in or register to reply here.
Share:
Facebook Twitter Reddit Tumblr WhatsApp Email Link