Games are great fun, but sometimes you need to switch things up. You could just get up and take a walk, I suppose, if you're into that sort of thing... or you could play another game INSIDE the game you're already playing! Some minigames are just little things you do to hack a computer or unlock a chest, others are pretty complex games in their own right, like Witcher 3's Gwent or Final Fantasy 10's Blitzball.

What have been your favorites on PC so far? 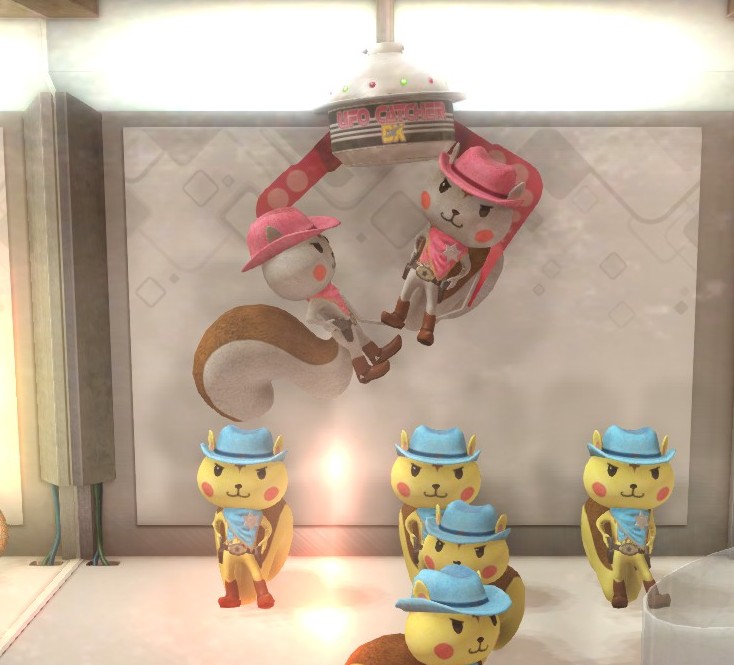 (Inspired by @ipman's question in the Pop Culture forum and a recent article in the print PC Gamer)
Reactions: Ryzengang, Frindis, Pifanjr and 2 others

The standout for me is Far Cry Arcade, loads of fan-made maps with objectives and enemies inside of Far Cry 5—there are arcade machines scattered around various locations where you can access it. Some maps are even good, and there are lots of articles and videos about the best and the latest.

The Civilization games have all had a bunch of 'scenarios' to play, essentially like campaigns with objectives. I never got into them personally, but many enjoy them.

I usually spend 5-10 minutes in poker games and similar which appear in many other games, but nothing stands out. I don't like the fishing which seems to be a recent pastime trend in games.
Reactions: Zloth, Ryzengang, mainer and 3 others

I'm probably forgetting something better, but Quidditch in the Harry Potter and the Philosopher's Stone video game for PC is one that comes to mind that I actually really enjoyed.

The stuff that often gets mentioned in lists of best mini-games, like Gwent or Triple Triad, was never very interesting to me. I think the best card game I've played in a video game was Caravan in Fallout: New Vegas.
Reactions: Zloth, Ryzengang, Kaamos_Llama and 2 others

I enjoyed the Fallout 4 hacking mini-game. Always cool to find small pieces of information locked behind some password and I think Fallout 4 did it quite well. Playing poker in Red Dead Redemption 2 is my favorite so far. Perfect setting, you play hold'em and it is relaxing. If I am not mistaken you can also smoke/drink, so that adds a bit of quality also.
Reactions: Zloth, Ryzengang, mainer and 3 others

There's been a few I liked that I can think of, probably a lot more that I dont remember.

Finding the Wolfenstein 3d machine in Wolfenstein : The New Order as well as the secret Doom in Doom 2016 was great. Probably put an hour or two into each, those games are still a lot of fun.

Chocobo racing in FF7, definitely some time went there.

Pod racing in KOTOR I played until I got first place at each track I think, was fun.

Dice poker from the first two Witcher games, played a lot as well. But mostly I played a lot of hours of Gwent in TW3 as well, so its probably the ultimate winner for me.
Reactions: Zloth, Brian Boru, Pifanjr and 3 others

I really love mini-games within games, whether it's lock picking, computer hacking, card/dice games, I even loved planet scanning in Mass Effect 2. Racing mini-games aren't really a favorite of mine though, as I'm terrible at vehicle driving and/or horse races, and I'll often skip those, unless it's a part of a quest.

My favorite would have to be Gwent from Witcher 3, like @Kaamos_Llama , I put a lot of hours into playing & building my deck over the course of the game. I didn't have any interest in the spinoff Gwent game that released later, but as a mini-game, it was probably the most in-depth one I've ever played. A close second would be Caravan from FONV.
Reactions: Zloth, Frindis, Brian Boru and 3 others

I know what is probably one of the worst mini-games. Apparently WoW now has a flappy bird mini-game and it's even worse than the original. My wife asked me to try after she failed it multiple times and the worst part is that I wasn't allowed to keep going until I won. It's so terrible that I want to beat it.


mainer said:
I even loved planet scanning in Mass Effect 2.
Click to expand...

I don't think I would say I loved planet scanning, but I certainly put a lot of effort into it and it was very satisfying maximising the reward for each probe.
Reactions: mainer, Frindis, Brian Boru and 1 other person

Honestly, my favorite has been the bowling game in Yakuza 0 (and others). The circuit completion games in Watch Dogs 2 and 3 were pretty fun, too.

Kaamos_Llama said:
Finding the Wolfenstein 3d machine in Wolfenstein : The New Order as well as the secret Doom in Doom 2016 was great. Probably put an hour or two into each, those games are still a lot of fun.
Click to expand...

The new Doom has Doom 2 in it (and Doom 1? ). I played that for a few hours... until I got stuck at a spat that made it absurdly difficult to get a key. It wasn't that there were too many enemies, it was just a VERY difficult jump.

The Yakuza games like to put entire SEGA arcade games into them. Yakuza really is the king when it comes to mini-games. (The pic in the first post is from Yakuza, too.)
Reactions: Pifanjr, mainer, Kaamos_Llama and 2 others

Zloth said:
The new Doom has Doom 2 in it (and Doom 1? ). I played that for a few hours... until I got stuck at a spat that made it absurdly difficult to get a key. It wasn't that there were too many enemies, it was just a VERY difficult jump.
Click to expand...

Now it gets really confusing, is the new Doom, Doom Eternal or Doom (2016) in this context

I remember finding Doom levels in the 2016 game, but looks like they were from Doom 2. Didnt find any in Eternal
Reactions: Pifanjr

God for how much I'm on the fence about the game itself, I did love the card game in Final Fantasy 8 a ton. I don't know why but it's one of the few card games that have clicked with me over the years. Didn't like Gwent, didn't like Caravan in Fallout, but for some reason the ff8 card game had me hooked.
Reactions: Pifanjr, Slasken, Kaamos_Llama and 1 other person

@Kaamos_Llama - they did them differently in Doom Eternal. There was a computer in your HQ that could play it in full, complete with its own save system.

Zimbaly said:
...but for some reason the ff8 card game had me hooked.
Click to expand...

Starved for entertainment, no doubt. (I didn't like FF8 *at* *all*)
Reactions: Pifanjr and Brian Boru

Zloth said:
@Kaamos_Llama - they did them differently in Doom Eternal. There was a computer in your HQ that could play it in full, complete with its own save system.
Click to expand...

Ah! I did find the Doomslayers mancave I just didnt spend much time in there playing around. Still havent finshed it but I did get the point of no return warning so I probably wont see it now
Reactions: Pifanjr

What, you only keep one save game??

Actually, I think it sends you back to HQ once the game is done so you can re-play levels. Assuming you CAN finish the game, that is!
Reactions: Pifanjr and Kaamos_Llama

Zloth said:
What, you only keep one save game??

Actually, I think it sends you back to HQ once the game is done so you can re-play levels. Assuming you CAN finish the game, that is!
Click to expand...

Yea, I just click on the slot and continue game, haven't really thought about making multiple saves. Makes sense that you can go back with all the challenges around, didn't think of that at the time of posting.

I'll get there eventually, I'm not even currently stuck I just havent felt like playing it as things are hectic enough at the moment!
Reactions: Pifanjr and Brian Boru 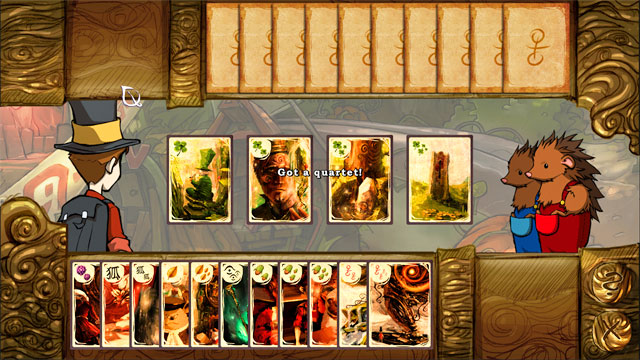 It‘s super simple, it‘s lovely cards, and you can play it against almost any of the characters inside the game! I remember playing it for hours and hours… Great memories
Reactions: Pifanjr, Zloth, Kaamos_Llama and 1 other person

No, not weird at all @McStabStab!

Nobody knows the games that are mine. Back in the C64 days, I really loved the games made by the Daugherty brothers. The Questron games, Legacy of the Ancients, and The Legend of Blacksilver. They had some great gambling games to build up your gold, and they also had some skill minigames to build up some of your stats. Those were my favorites.

Other than that, here's something I'll bet no one has thought of. Mini-games in Microsoft Excel. Remember Hall of the Tortured Souls in Excel 95?

I don't remember that, but I do remember some sort of "flight simulator" in Excel 97.
Reactions: Pifanjr and Brian Boru

Zloth said:
I don't remember that, but I do remember some sort of "flight simulator" in Excel 97.
Click to expand...

Yeah, for a while, they were programming these Easter eggs into Excel. What you're talking about was the next one after what I posted. I think they did something in Office 2000, too.
Reactions: Pifanjr, Zloth and Brian Boru

Maybe Blitzball would be my favorite also but i can remember that i actually liked those rocket minigame in Crisis Core. I likedFF VII and even played Crisis Core on PSP Go and can't wait for the remaster or remake or what there are planning to do, but it doesn't matter as i personally glad that this game is finally will be on PC and not only on PSP
Last edited: Nov 29, 2022
Reactions: Zloth
You must log in or register to reply here.
Share:
Facebook Twitter Reddit Tumblr WhatsApp Email Link