What is your favorite racing game and why?

Probably Need for Speed 4: Road Challenge (High Stakes). I spent countless hours in this game on police chases with my cousin. Objectively it's probably not the best game in the series, but we loved it for some reasons. These were still the times when cars actually got damaged both visually and technically. I don't have to explain what potential that gives if we pair it with police chases.
Reactions: Brian Boru

Last one I played that I really liked was GRID 2019. It had some great race action. After looking at the soon to be released GRID Legends, I'll most likely be playing that as well. Now that the developer Codemasters is owned by EA though, I tend to worry about overall quality control, and the possibility of bugs going unfixed.
Reactions: Brian Boru

None of the games mentioned are like F Zero.


They all involve cars for starters

Shame Nintendo haven't made a new version in a while. I liked it on N64

I don't know of anything like it now. You would think there would be.

I mean, they haven't even made a better version of Wave Race and its over 22 years old now.

I don't know what my favorite was.
I liked Need For Speed Porsche Unleashed, not for its graphics but because everyone handled differently
I spent the most time playing TDU2 but a lot of that wasn't racing
Last edited: Feb 6, 2022
Reactions: WoodenSaucer

ROAD RASH but out of the Road Rash series, Road Rash for the Sega Saturn/PS1 and Road Redemption are my favorite.

Colif said:
None of the games mentioned are like F Zero.


They all involve cars for starters

Shame Nintendo haven't made a new version in a while. I liked it on N64

I don't know of anything like it now. You would think there would be.
Click to expand...

A lot of old fans have wished they'd make a new F Zero game. They never will, though. They're not exactly the same, but Fast Racing Neo on the Wii U and Fast RMX on the Switch are pretty similar futuristic racing games. Fast RMX is great, and if you have a Switch, it's only $20.

Well, I played this:
View: https://youtu.be/AH7iMzEHOxg


I didn't like it much. Haven't played a racing game since.
Reactions: WoodenSaucer

They have got a little better since then.
To be fair a lot have just made it look a lot prettier without adding much apart from more tracks and cars. Every generation they got prettier without actually doing much more... story of lots of games though.

I had every racing game on N64, man there was a lot of .... games I wish I hadn't bought but at time, there was little choice. Eventually they released some good games. Guess it was first 3d console. Have to give them some excuses.

I like racing games that don't replicate Mario kart, don't need weapons in games. might be fun for people who don't know tracks but no fun if you always blown up from behind.
Reactions: Zloth

I'm a big F1 fan so I really like the Codemasters F1 games, they really put a lot of effort into the simulation and it feels very realistic.

I love kart/arcade races as well and my love of F-Zero as a kid has carried through into my adulthood. I now play Hot Wheels: Unleashed with my son and we have a blast. It's probably the closest modern thing to F-Zero that I can think of.

I would love to play the next Gran Turismo but obviously that will be a PS exclusive, so we'll see what happens.

CSR2 I like CSR 2 because I’ve got every car I would possibly dream of getting and no one can beat any of my cars.

Burnout
because this game looks so realistic. i mean, if you hit a car or cliff, your car should be crash and burn.
Last edited: Feb 11, 2022


fun game, i guess there are races in it... but i spent most time collecting things lol.
Reactions: Lutfij and Brian Boru
J

The arcade racers always felt like car theme parks and had absolutely killer soundtracks. If nothing else, a good racer, arcade or otherwise, has to have a great OST be it licensed or otherwise. All of the classics have them: OutRun, Ridge Racer Type 4, Gran Turismo 2, 3, etc.

As for the sim racers, they really go all in on realism and attention to detail, but they aren't inaccessible either. They're as complicated or as simple as you want them to be. You can get so granular with manual settings in Motorsport 7 its almost head spinning but there's also stock and user created tunings to help those less familiar with the intricacies of cars.

A good racer threads the needle between complex and overly simplistic while offering players as much agency as possible.
Last edited: Feb 13, 2022
Reactions: Brian Boru

Crash Team Racing (Naughty Dog, 1999). To say CTR capitalised on the kart racing trend set by Super Mario Kart and its sequel, Mario Kart 64, it far surpassed its rivals up until about 2014 where it's neck and neck with Mario Kart 8. It still remains one of gaming's best kart racers, along with Diddy Kong Racing.

For starters, it had a story, introducing a new character that would only halt Uka-Uka's course of becoming the leading antagonist, with Nitrous Oxide. Oxide is an alien that challenges all of Earth's best racers (or at least those of the Wumpa Archipelago, East of Australia) to contend in a series of tournaments to determine who among them can beat him, and if they do, he won't turn the planet into "a concrete parking lot." Despite living on the same planet with no means to escape, Ripper Roo, Papu-Papu, Komodo Joe and Pinstripe Potoroo will impede the player's progress. And even if Oxide is beaten, he won't accept true defeat until you've unlocked everything in the game and race him again, in true spiteful Crash fashion.

The next thing it did well was make stats easy to understand, with tangible (visible and physical) differences. A driver's performance was determined by Speed, Acceleration, and Turn. Beginner characters such as Polar the Bear and Pura the Tiger had the most Turn but the least speed. Intermediate characters such as Crash, Coco, Dr. Neo Cortex and N. Gin had more acceleration for the smoothest driving experience. And finally Advanced characters such as Tiny Tiger and Dingodile had the greatest amount of speed. This is hugely important for the balance of the game because there's no bloat, and everyone has easily seen strengths and weaknesses that are made up for by items and shortcuts. When you go any further with stats like Mario Kart and CTR: Nitro-Fuelled did, you create confusion and often times incorrect information.

Its cast of unlockable characters, through boss fights, relics, gems and cheat codes, fell into those three categories in some way, all recognisable and beloved characters of the franchise, from Penta Penguin to Fake Crash.

Into the gameplay itself, its map selection screen was a hub like any Crash game before it. You got to drive around the maps (an idea Bears Can't Drift!? borrowed) to practice your skills, get a feel for your character, and choose a variety of challenges. Much like in Banjo-Kazooie whenever you transitioned from one zone to another, a medley would play; the music remained the same but the instruments changed slightly enough to fit the scenery.

The content is very much similar to Diddy Kong Racing, requiring you to beat bosses and do all manner of side content before you can defeat the final boss proper. It doesn't feel tacked on and it provides a very difficult, but still genuine, challenge. Time challenges for relics, CTR token runs, tournaments for gems add loads of extra play time.

Things begin to go downhill from here. Some of the items are familiar to Crash players; the iconic TNT and Nitro crates and the Aku-Aku/Uka-Uka invincibility masks were dependent on your character's alignment. And obtaining and keeping 10 Wumpa fruit would allow you to power up your, err, power ups, increasing their magnitude and duration. However, some of the items were uninspiring to say the least. Crash Bandicoot 3: Warped's 'warp orb' was the blue shell that damaged all opponents in front of you, and the bombs from Coco's jetski levels made an appearance. N. Brio's flasks from the first game were a stretch for stationary experimental hazards. Beyond that, the devs were clearly lacking in the ideas department.

That also goes for the maps. The vast majority of them you wouldn't recognise without a character's face painted on them? What does Roo's Tubes have to do with Ripper Roo? What does Dragon Mine have to do with Komodo Joe? Why does Cortex Castle - an obvious knockoff of Bowser Castle - look nothing like the spires we'd ascended to defeat its namesake?

Look to the party game Crash Bash, one of the worst Crash games, made by Eurocom. The music and aesthetics of that game are far more suitable and recognisable than Crash Team Racing. Music goes a very long way to creating a sense of familiarity, and while CTR's music is good, damned good, it's not Crash.

That essentially concludes why Crash Team Racing is my favourite racing game, Diddy Kong Racing a close second. I would link video reviews to the two (as kart racers were what my channel later came to focus on) but the vulgarity makes them unsuitable for posting, and I don't want to be seen as using this forum to advertise.

I hope that helps. Good luck with the game!
Reactions: Brian Boru

Hey, I looked at the top from gameranx, I almost completely agree with him, but for me, Forza Horizon 5 is in the first place.

Withywarlock said:
Crash Team Racing (Naughty Dog, 1999). To say CTR capitalised on the kart racing trend set by Super Mario Kart and its sequel, Mario Kart 64, it far surpassed its rivals up until about 2014 where it's neck and neck with Mario Kart 8. It still remains one of gaming's best kart racers, along with Diddy Kong Racing.
Click to expand...

they remade it 10 years later although not same makers 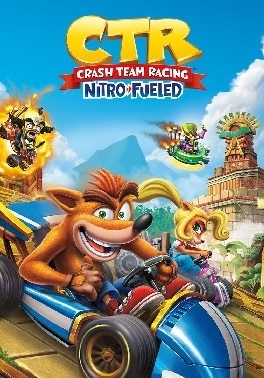 Colif said:
they remade it 10 years later although not same makers

Indeed, but it has quite a lot of problems such as floatier controls, stats that are false (see the link provided in my original post) and of course the inclusion of battle passes and limited time events and maps. I still stand by my original statement: the 1999 game is vastly superior to most other karters, including Beenox's Nitro-Fuelled remake.

Games made prior to 2010 seem to mostly be made by people who care about the games. Further you get away from the people who created the games and give game to another crowd who may not understand it, you bound to lose something.
Reactions: WoodenSaucer
You must log in or register to reply here.
Share:
Facebook Twitter Reddit Tumblr WhatsApp Email Link