So my surge protector ( APC Surge Arrest Essential - PM8-UK - 8 outlets - Equipment Protection Policy 50.000 € ) has developed a fault with the power button (its sort of broken) so i'm looking to replace it. if i'm lucky i might have warrenty to replace it but i can't do with out one.

Now, i'm not a power gamer as such nor do i actually leave my pc on 24/7 so i'm not entirely convinced a UPs is the right fit for me. I'm just wondering what Surge protectors you guys use so i can replace my current one.

i suppose besides my pc, i generally use it to charge my phones and/or use it during work when i plug in a laptop (i don't use the pc and laptop at the same time though.

Any advise or suggestions would be great.
Reactions: ZedClampet and Kaamos_Llama
J

Addendum it seems like most surge protectors don't seem to have high joule resistance (around 970-1000) and the only one that ahs anywhere decent is the one i bought has 2750j. At 44.99 a pop i might just get it but of course open to suggestions.

You just reminded me I might pick up a better one myself. Dont even know what brand mine is or what its rated at, just picked it up from a local store a few years ago. Lights still green, I think the power around here is pretty reliable luckily.

Always good to have something better though just in case, I couldn't afford a new rig with the way prices are at the moment.

I have a Belkin one. No idea how that rates on the scale, but it was more expensive and better brand than the usual Amazon best sellers.
J

i had bought a couple of belkin ones but i felt they were a little light weight. I didn't have any problems but i just didn't trust them.

One of the things that was quite shocking was occasionally when i turn the power on from the mains, there would be a loud crack. No problems or issues but the sound couldn't mean it was any good. my guess was that it was perhaps a sudden rush of power causing it (my Gaming PC and monitor plugged in). But i opted to get another surge protector all the same.

I sometimes get a cracking sound when I turn it off at the mains but the speakers were still powered on.

Sorry, I can't be more helpful. I've had it for a couple of years and not had a problem.

I would say if you've had bad experiences with Belkin go for something nicer.
Reactions: Kaamos_Llama

Geez. You guys are making me nervous. As someone who has been burnt in a very financially significant way (bye bye $3000 Alienware laptop) by having an insufficient surge protector, I highly recommend doing some research and getting something actually designed to protect sensitive electronics.

ZedClampet said:
I highly recommend doing some research and getting something actually designed to protect sensitive electronics
Click to expand...

If anyone needs more than a surge protector—eg protection against power outages—then you need an UPS, Uninterruptable Power Supply. These have batteries which give you ample time to save and close things down before switching off—a surge protector doesn't help with that.

My UPS is CyberPower which has been flawless for over a decade. Prior to that I used APC brand, which was also good back then.

UPSs are in the $150-200 range, so may be overkill if you can afford to lose whatever you were doing when your power died, and you don't have a HDD which can be physically damaged when a read-write operation is rudely interrupted.
Reactions: ZedClampet
J

ZedClampet said:
Geez. You guys are making me nervous. As someone who has been burnt in a very financially significant way (bye bye $3000 Alienware laptop) by having an insufficient surge protector, I highly recommend doing some research and getting something actually designed to protect sensitive electronics.

Indeed. Shockingly, few companies even provide info as to what kind of resistances (joules wise) that it can properly resist let alone back it up with any insurance. I'm sure we could calculate it, but the fact few even promote the power is just unacceptable.

To be fair, most will be ok for small stuff but for Gaming rigs absolutely not. The only one i found that came closest was the APC one which comes with insurance protection and the reason i was buying a new one was because the power button on it broken (its permantely stuck on "on") .
Reactions: Brian Boru and ZedClampet

I use a Belkin Surge protector, with 6 slots, not sure what model it is as it doesn't say on front and its not easy to get to the rear of it.

its not showing as grounded which is a little disconcerting, as it should be. Its attached directly to wall and not through an extension cord. I might try another wall socket. If I remember to.

Might need a new one soon, I generally buy a new one every PC and I can't recall last time I got one.

I unplug PC completely if any storms around. I can't afford replacement parts and its better to waste time with a storm around than afterwards... in my mind.

Why? Why have two lights that mean same thing but status needs to be opposite.
I have a Not Grounded light and its off. Meaning I am safe. 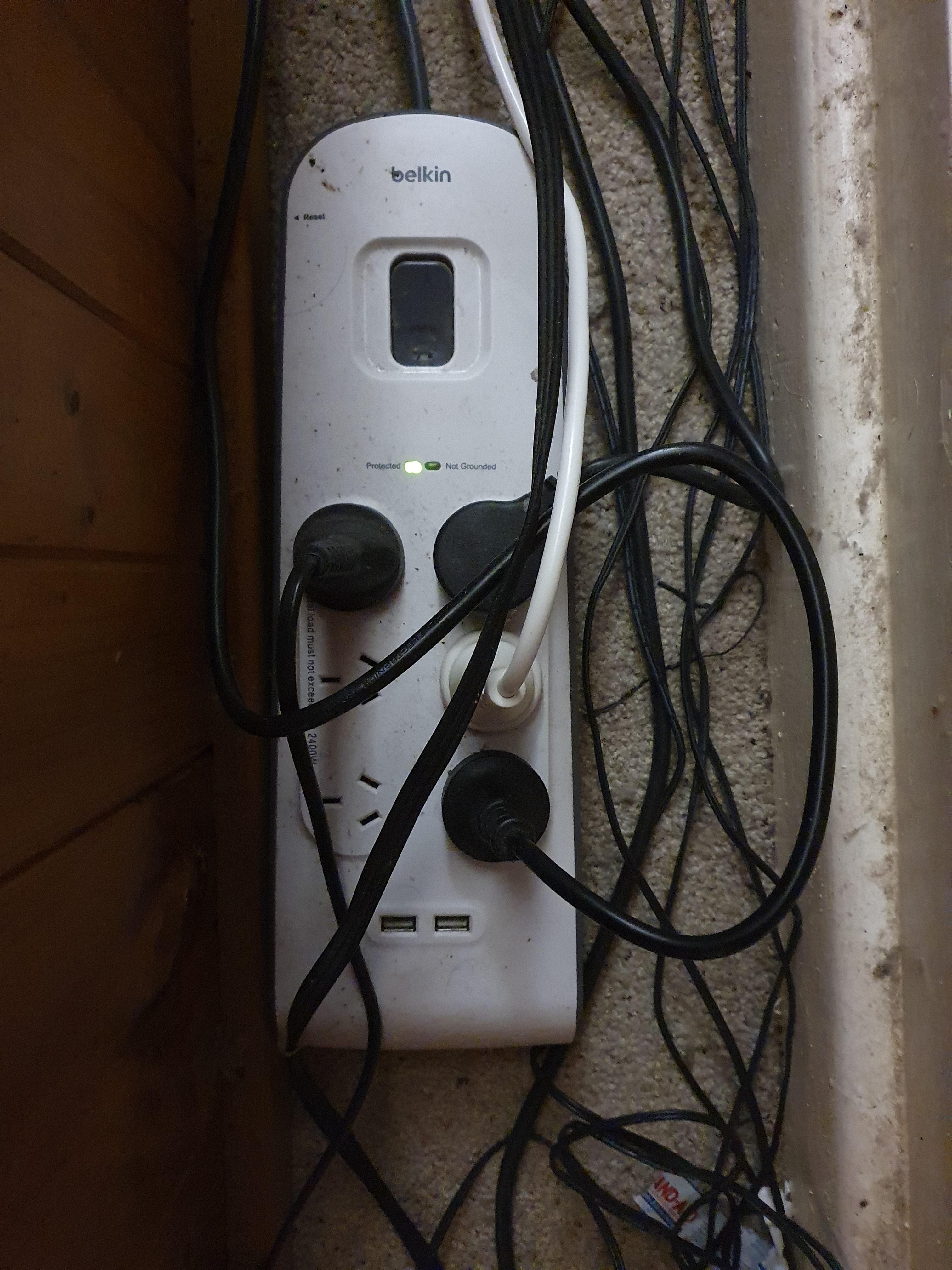 ignores cries of cable management, I can't see cables from where I am, box hides them from me.
Last edited: Nov 13, 2021
Reactions: Frindis and Brian Boru
M

if you think you have a grounding problem get a plug in socket tester to check the wall socket , the lights will tell you of any potential problem.

When you get a new surge protector look at the fine print on the packaging , some offer free insurance damage to products connected to it if it fails.

Try and find one that some of the sockets swivel , also get one with more sockets than you need because as you probably already know some plugs are quite big and you cant always put something next to a big plug.
Reactions: Brian Boru

mine was just confusion since Belkin label it two different ways, depending one which unit you get.

As units wear out over time, and it only has a 2 year warranty, and I can't remember when I got it, its time for a new one anyway. Might not get Belkin only as other units offer longer warranties.