What do you thinkg about FAKE reviews on Steam and manipulations of reviews?

There are multiple games studios that got removed from Steam by Valve for manipulating reviews and making fake accounts just to bump up ratings on Steam.

Topic is rising in Poland, as two companies described below are from this country. But still it's hard to reach Valve and show them the proof. What is funny, Steam took down some studios for making just... six... fake accounts and fake reviews. It was enough reason to remove games from platform. Here we have much bigger studios, linked with stock markets.
There's also email that got leaked about posting fake reviews on Steam from one of described companies. It's funny to see that they have "secret corner" for fake and paid reviews.
First is the company called Prime Bit Games.

They developed some games on Steam and people started to be suspecious about their newest one. It was quite strange that all accounts that gave their game positive review are mutual friends. So Steam users started digging and found this. The list of accounts that gave their game thumb up on Steam - all linked together, all accounts are from the same city (option in Steam profile) as developers. And even some of them are developers themselfs. 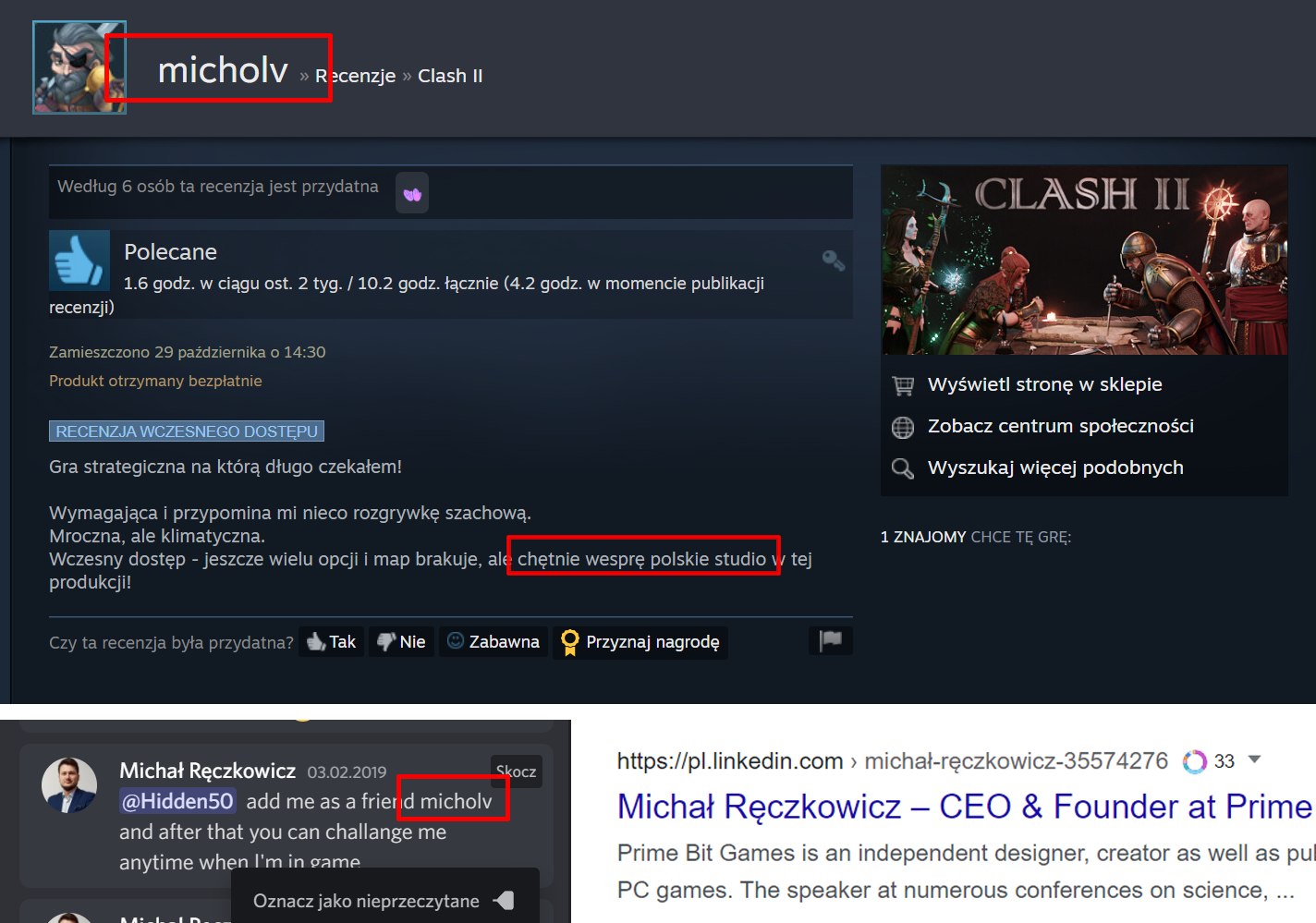 As you see, this review is posted by CEO of company that made this game. He was trying to hide himself as typical Steam user that want to support Polish game studio, as it's described in Polish. But someone found his message on Discord and made a proof that he manipulated reviews for his own game. Devlopers of this game are not very smart as one of reviews is posted by user called Emiliano, he also plays the role of sole random Steam user that want to support the game development. Despite... he is under the same nickname marked as developer on this game Discord. And he likes to ban people if they will say something about such reviews.

Another problem in gaming market are games rated by new accounts that just bought the game and posted positive review after some minutes. They are very obvious but not many games are making fake reviews so hard and so much. One of such games is Project Wunderwaffe made by Gameparic (sub company of quite bit Playway). Over 20 reviews (~30% of all posted now) are made by account that have one game and one review. Also we can see that such accounts where made on day of release. Gameparic is small company from Poland and some of such fake accounts has polish-like names, for example Cracovia below, it's the name of city in Poland - Kraków - and football club, Cracovia Kraków. So? 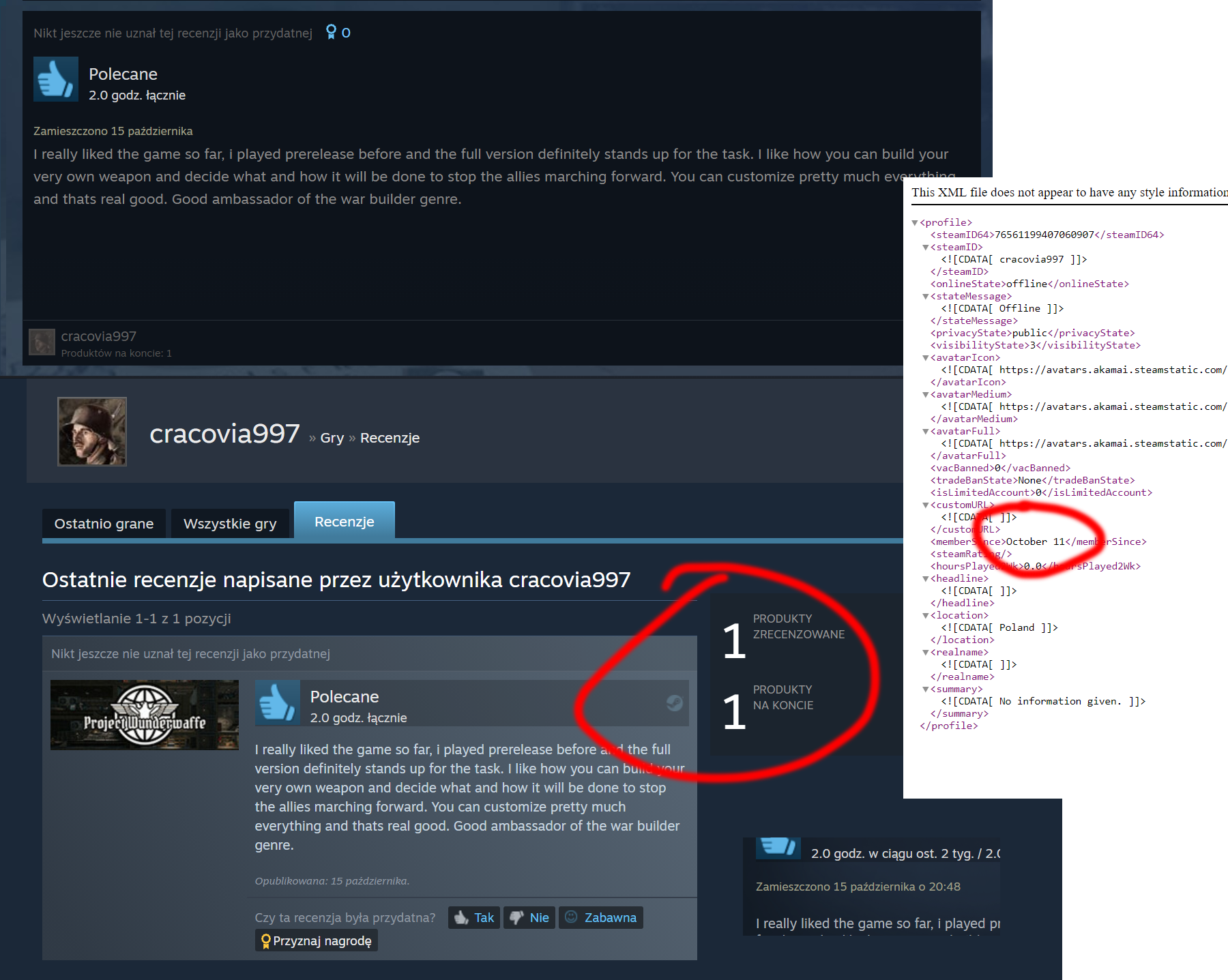 For some of you it will be TL/DR and something totaly not interesting, but it's quite nice proof that some games are literally trying to cheat on Steam market. And as I said before - Steam decided to put down whole studio just for six fake reviews posted by devs themselfs. Here we have even bigger problem - both companies are listed on stock markets. They have shatload of money for ads and even got few thousand likes on their ads on Facebook. But as we see it was not enough to push the sales
Reactions: ZedClampet and Pifanjr

I hate that crap. Just like when people own any other business and then review themselves online. I'm not saying a game or store or business isn't good, but you gotta let the public determine or voice their opinion of that.

Also I know some places have laws against that cause it can be used in a scummy businessman/woman type of way.

This kind of thing is as old as the hills, and way older than digital marketplaces. Steam gives you a bunch of tools to help you combat the problem.
Here's the main defense: READ THE REVIEWS. You won't have to read very many as most of the reviews people post are so short that they are completely useless. Find the reviews that go over the features of the game and whether they are good or not. Friends & family that are just chiming in to give a thumbs up can't leave a competent review because they never played.

Bonus points: Steam tells you how many reviews the account has made. If you click that number, you'll see the account's reviews! Find a game you've played and see if your experience matches the review that's left. Maybe you'll agree, maybe not, but you'll know for sure if the account is just making up things to say. (And, if the reviewer matches your opinions really often, you might have just found a new friend!)
Reactions: ZedClampet, Pifanjr, Lutfij and 1 other person

Some fake reviews stick out like a sore thumb , on steam if you dont see the mouse icon next to an abuse post then 2 things are possible either they have not bought it or they have bought it on another game platform and decided to pay steam forum a visit to spread their angst.

If a review is bad mouthing things you have not seen happen in a game then that in itself would make me suspicious.

Look at the bad mouthers other reviews and see if their is a pattern. On one game a guy was letting rip about something and a dev said ..... this person is a review troll because he had seen his list of user names and recognised them.

I have first hand experience of trollers bad mouthing a game that had nothing wrong with it.
In 2015 i got pc version of crystal rift , its an indie game.
It was full of crystals in the wrong places so almost every level could not be started as you had the wrong crystals needed to open the doors to the next level . Over a period of 2 weeks i help the guy sort it out and on xmas day morning i emailed him the last problem and then i completed it from begining to end.

Despite me reporting this in steams discussions page their were a bunch of players who seem to be going out of their way to say it was rubbish and unplayable ..... i eventually gave up and left them to it.
Reactions: Pifanjr and Brian Boru

One thing is for sure, Valve isn't going to delist Playway games. Playway is awful and a pain in the butt, and I've posted about them on here before, but they also have 58 games on Steam and double that in the Pipeline. And while most of the games they publish are shallow crapware, they also have some huge hits and actually seem to be improving over time (I almost hate to admit that).

Also, as bad as they are, I still doubt Playway has any idea these little studios they are publishing are trying to game the system with fake reviews, And even if they did know, I'm not sure I care about half-a-dozen developer reviews. That will be wiped out in no time by real reviews. Now if they start offering keys on their Discord for people who write positive reviews, that's a problem.

I should point out that I'm being compromised because I was arguing with one of Playway's employees about all the dead game pages they have on Steam (games they listed on Steam, but actually have no intention of making), and he sent me a free game hahaha. His answer to me on the dead games was that Valve didn't want them to delete them, and that's probably accurate, but I bet Valve wouldn't mind if they're hidden like the games that are taken off the market.
Reactions: Pifanjr, Brian Boru and mainer
You must log in or register to reply here.
Share:
Facebook Twitter Reddit Tumblr WhatsApp Email Link