I come to you gamers once again burning with questions, or rather one question, a question whose best answers will be included with our staff's for a weekend feature on the site!

It may be a little silly, forking over $150+ for a game you can get for half that, but I think we've all been tempted by the siren song of a videogame collector's edition. Are you as enamored of those LimitedRun KotORs as I am? Or have you been burned by the cheap plastic and gaudy marketing of a AAA release too many times? I want to hear about the tchotchkes you treasure, or else the buyer's remorse you'll never forget.

Also, wanted to shout out mainer who had a thread a year and a half or so ago debating the merits of VG collector's editions, and touched on the very infuriating fact that they often just don't even have a game in them anymore.
Reactions: Ryzengang, Pifanjr, mainer and 3 others

My Skyrim collectors edition is pretty great. I love the dragon statue and i still have the original box with its books and everything on display. that would be my favorite.
Reactions: Pifanjr, mainer, Brian Boru and 1 other person

The eyes of the box light up when opening the box but you can't see it when looking from above. And the box wasn't worth anything second hand once I realised.

PCG Ted said:
I think we've all been tempted by the siren song of a videogame collector's edition
Click to expand...

Oh no we haven't!

I've never bought what you're talking about, but I have bought Collector's Editions of game franchises—best undoubtedly being the 17-game Command and Conquer Ultimate Collection.

In the casual game world, Collector's Edition does not include anything physical but rather extra files like a strategy guide and art book, and then also extras in the game—ie a different version of the game—like collectibles and extra levels. I haven't bought many of those, with the best being the CEs of the excellent Royal Envoy series which provided ~50% more levels.
Reactions: Pifanjr, Zloth and Alm

I got a version of City of Villans that had a tiny, plastic Ghost Widow figure. That's the closest I've ever gotten to a Collector's Edition style statue. I do still have the plastic figure, so I guess it's a win.

The KotOR2 stuff doesn't appeal to me at all... except the poster that has HK-47 in the background. I would pay maybe a dollar for that.
Last edited: Nov 4, 2022
Reactions: Pifanjr, Alm and Brian Boru

I would say the best collection I have ever bought is the uncharted collector's edition. It includes "UNCHARTED 4: The Thief's Path" and "UNCHARTED: The Lost Legacy".
In my opinion it is the best adventure game. It is also a great shooter with good graphics and pretty realistic graphics.
Reactions: Pifanjr and Alm

I don't think I've ever bought a collector's edition. They usually come with a special box, and maybe some trinket or map. It's all stuff you have to find a place for, and I don't like having to find places for stuff. I prefer to just get all my games digitally.
Reactions: Pifanjr, Alm and Brian Boru

Probably the best one I ever bought was the Warcraft III Collector's Edition, as it came with a TON of cool physical stuff (though nothing like a helmet or canvas bag, just art books and a guide and posters and cinematic DVD's and whatnot, I don't remember the specifics, as it's been a while), and I got it for dirt cheap from a store that apparently didn't know it was worth far more than the $25 I paid. (This wasn't that long after The Frozen Throne had come out. I think the regular base game was going for $19.99 at the time.)

Honorable mention goes to The Roberta Williams Anthology, which was less a "collector's edition" and more of a... well, collection in general, showing off her legacy in Sierra (while also plugging Phantasmagoria, which only came as a demo on it, IIRC.)

Having said that, I don't know that I've bought any "collector's editions" since I went digital downloads only. Except for maybe some GoG offerings that are labeled "collector's editions" despite it all just being digital swag. I think the term generally means something different nowadays, usually referring to a more complete version of the game. Though if the only difference is the Advanced Deluxe Legendary Edition comes with hi-res wallpaper and the soundtrac in FLAC format, I'll probably not spring the additional ten bucks or whatever they're asking.
Last edited: Nov 4, 2022
Reactions: Brian Boru, mainer, Pifanjr and 1 other person

I think you mean RobertA Williams, @Krud. Don't make Ted do a [sic]! (Actually, I don't think they do with our posts. The posts from the forums section would look like some sort of sic joke if they did.)
Reactions: Pifanjr, Brian Boru, Alm and 1 other person

Zloth said:
I think you mean RobertA Williams, @Krud. Don't make Ted do a [sic]! (Actually, I don't think they do with our posts. The posts from the forums section would look like some sort of sic joke if they did.)
Click to expand...

I've purchased quite a few collectors' editions over the years for games or game series that I really enjoy. But I'm a bit picky about those that I do purchase, as I look at what type of physical "loot" is included, more so than just the digital "rewards" for paying extra. PC gaming is my number one hobby, and being a kid at heart, I love those things like cloth maps, statues, unique card decks, hard cover art books, replica coins, and all the other little physical items that might be included. I am not, however, interested in those collectors' editions that offer only digital rewards, such as in-game weapons, armor, pets, or in digital art books or soundtracks.

Naming my favorite collector's edition is a bit tougher, but it would have to go to the original Pip-boy collector's edition for Fallout 4. The original CE sold out in less than 48 hours, and you got an actual Pip-boy (in a Vault 111 crate) that you could actually wear, plus you could insert your smart phone (though not all makes/models) into the Pip-boy, download the Pip-boy App, which connected to your game so that you could access all stats, maps, and quests, just like you would in the game. In theory at least. The App was notoriously buggy and only worked about 75% of the time, I don't think it's available any longer. But it remains the only interactive CE that I've ever owned. In addition, you also got the Season Pass so that you got all future DLC for free. 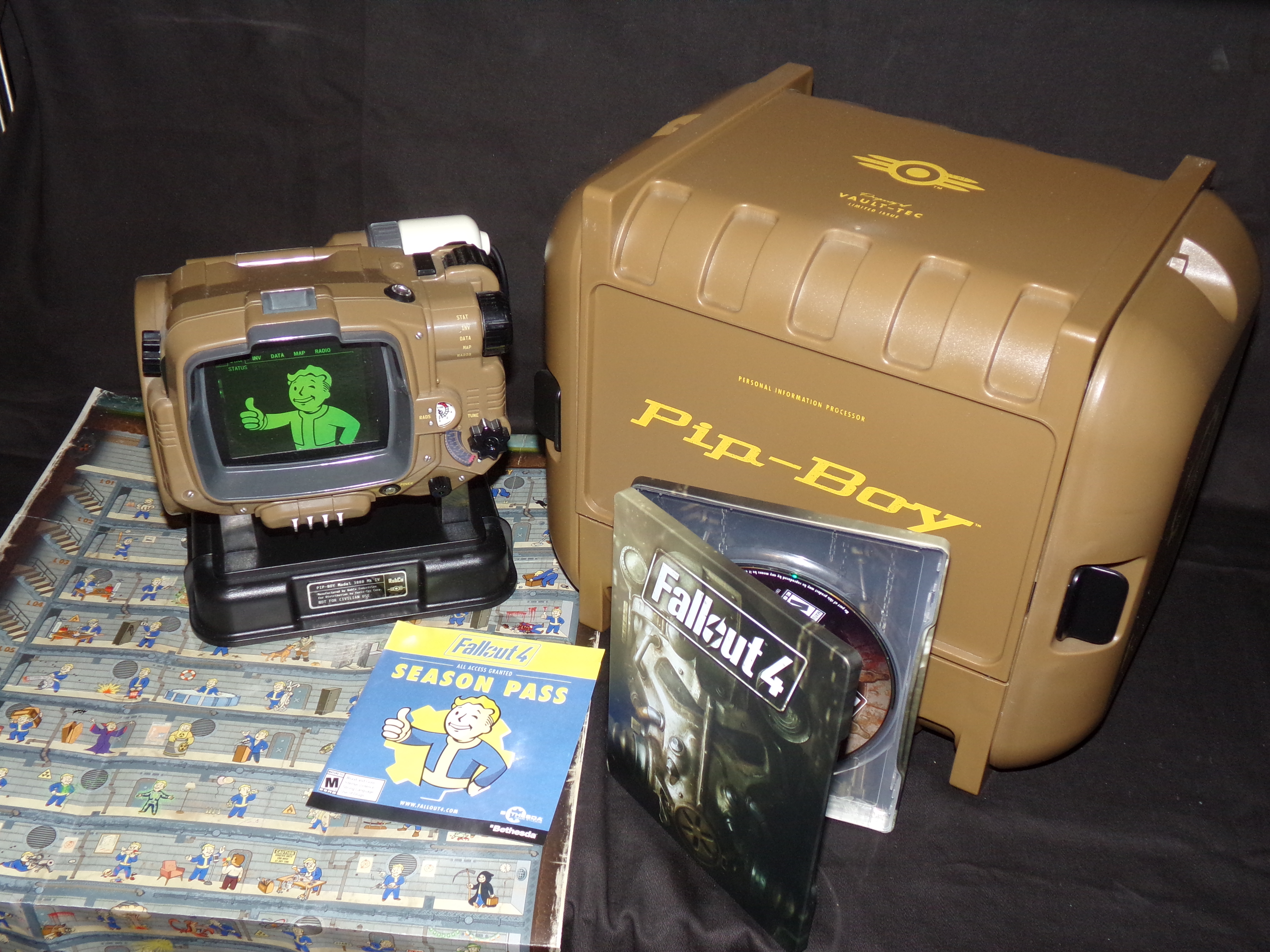 Without doubt, the worst collector's edition I've ever purchased was Ulima 9 Ascension. A huge game box that was hard to fit on shelves, and entirely unneeded for what little it contained. A cloth map, a poster, a few unique tarot cards, and a certificate signed by "Lord British". Disappointing to say the least, and what made it worse, was that the game was terrible & buggy and a poor reflection on such a great RPG series. A very sad end. 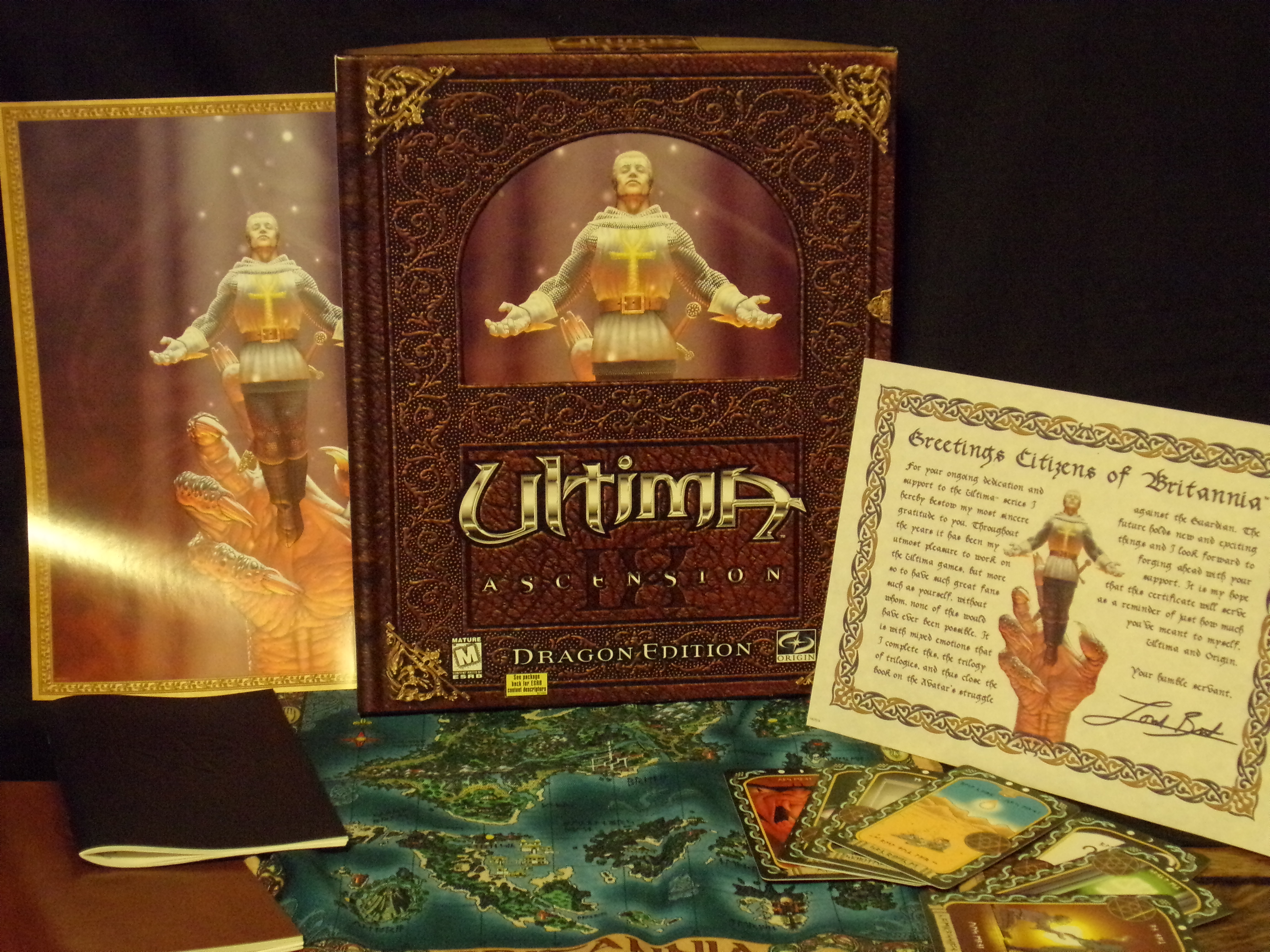 @mainer Even though I'm not into collector's editions, I agree that the Fallout 4 one was really great. I think that was definitely one of the better ones I've seen.
Reactions: mainer and Pifanjr

Krud said:
Thanks for catching that!
Click to expand...

You guys are typically quite good writers so it's not an issue but I'd never hang you out to dry on a typo. Poster's creed.

EDIT: Just to avoid double posting, saw a bunch of people mentioning like digital collector's editions. I agree those kinda just blow. I want a tangible piece of crap I can turn over in my hands once then let gather dust on my shelf, or a real, physical book. Soundtrack download doesn't do it for me. I'll get one of those if it has a DLC season pass or something though.
Last edited: Nov 5, 2022
Reactions: Krud, Brian Boru and mainer
You must log in or register to reply here.
Share:
Facebook Twitter Reddit Tumblr WhatsApp Email Link