Weekend Question: What's a game you gave up and watched on YouTube instead of finishing?

This week's question is: What's a game you gave up and watched on YouTube instead of finishing?

I can't be the only person who, after finding out that unlocking the true ending of Arkham Knight required completing every single Riddler challenge, just watched the bloody thing on YouTube instead.

More recently, after hours fighting through corridors in Stranger of Paradise: Final Fantasy Origin to level up some jobs and then get bored, I relied on YouTube to tell me why Jack was so adamant Chaos was a person he could find and kill and not, like, an abstract concept. Turns out the answer's halfway interesting, though still daft as a brush. Maybe in a few years we'll find out what went on behind the scenes of that game to leave it in the weirdly gutted state it released in, with arbitrary leaps in quest level-requirements that other activities were presumably meant to fill, and townsfolk conversations accessed from a menu because the city hub was clearly cut late in development.

What's a game you gave up and watched on YouTube instead of finishing? And if you never have, why are you a much better human being than the rest of us?
Reactions: Ryzengang and Brian Boru

It's pretty rare for me (if I'm not interested enough to keep playing, I probably won't bother to look up the ending, either) but I just did that with NieR Replicant. I was bothered by all the repetition the first time I played the game to get ending A. No way was I going to go back to that Junk Yard section! So, I watched endings B through E on YouTube. Then watched a video covering everything that happened before NieR. Then everything that happened between NieR and Automata. Wow!
Reactions: mainer, Pifanjr and Brian Boru

The only time I've ever done this (sort of) was with Doki Doki Literature Club. I knew what was going to happen, and I didn't want to experience it, so I just read a plot summary of the game.

Part of the reason I'll quit, but not look up the ending is because I'm always stupidly optimistic that i'm actually just taking a break and will come back to the game later.
Last edited: Jun 10, 2022
Reactions: Zloth, Ryzengang, Pifanjr and 1 other person
S

Never. The only time I use YouTube is when I am stuck and need some help. I reckon most games don't make decent "movies".
Reactions: ZedClampet, mainer, WoodenSaucer and 1 other person

I don't think I've ever looked up the story of a game I stopped playing, but I have used cheats to get the story without having to bother with the gameplay. Notably, I played all of the first Witcher game with god mode on and I used god mode for the final fight of Dragon Age: Origins.
Reactions: ZedClampet, mainer and Brian Boru

Sekiro Shadows die Twice. Was getting sick of the whole souls like endeavor and i knew i was close to the end, then other games had come out that id rather play so i just watched the ending scenes with youtube. Havent played it since.
Reactions: ZedClampet, Ryzengang, Brian Boru and 1 other person

Zloth said:
if I'm not interested enough to keep playing, I probably won't bother to look up the ending, either
Click to expand...

Me too. The only one I can recall is one of the Far Crys, I think New Dawn. I'd read it switched sub-genre at the end so the boss fight is melee or run n gun or similar nonsense.
Reactions: Zloth, mainer and Pifanjr

I remember getting to the end of a game and dying, and then having to restart far enough back that I just watched it on YouTube because I didn't want to go through all of that again. The problem is that I can't remember what game it was!
Reactions: Brian Boru, Zloth and Pifanjr
R

Sometimes I will, but the more likely scenario is that I will intend to watch it on YouTube and simply never get to it. For story-driven games with annoying gameplay (or if I get sick of it for one reason or another) it can be an ideal strategy, but I usually will never end up watching it. I did this for Middle-Earth: Shadow of War and it has been on my "watch later" list for months.
Reactions: Pifanjr, Brian Boru and Zloth

I've never done that. If I loose interest in a game, I just don't care what happens in the end, whether it be from combat difficulty or just a lack of immersion. I've looked at videos on YouTube for strategies on how to complete a specific "boss" battle at times, but other than that, no.
Reactions: Pifanjr, ZedClampet and Brian Boru

Getting Over It with Bennett Foddy 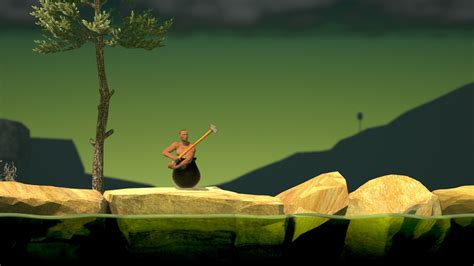 Anyone who's watched this game will know that it's only 2 minutes long.
Anyone who's tried to beat the game in 2 minutes will tell you that it takes hours of practice.
A game I both hate to play but love to watch.
Reactions: Pifanjr, ZedClampet and Brian Boru

SleepingDog said:
Never. The only time I use YouTube is when I am stuck and need some help. I reckon most games don't make decent "movies".
Click to expand...

Most don't, but most isn't all! Xenosaga makes for a pretty good watch.
Reactions: Ryzengang, SleepingDog and Brian Boru
S

Zloth said:
Most don't, but most isn't all! Xenosaga makes for a pretty good watch.
Click to expand...

Yes you are right. I should of said that the games I have played don't make good movies in my opinion.

Still feel bad for doing this, but after not being able to play The Witcher 2: Assassins of Kings on my old PC, I turned to the tube to watch the different boss fights. Thankfully this was some years back, so I just vaguely remember the last boss fight, which I can live with. This also reminds me that The Witcher 2: Assassins of Kings Enhanced Edition is -85% off on GOG, so now would be a great time to grab it.
Reactions: Pifanjr, Zloth and Brian Boru
J

Middle earth: shadow of war. new game+ screw that end game and the predatory lootbox/transactions meant i wouldn't even give it any attention. The game was shadow of mordor stretched x4 long and it had outstayed its welcome by the time i reached it.
Reactions: Pifanjr, Brian Boru and Ryzengang

Oh, yeah, I did that as well - even though the lootbox junk was tamed by the time I played the game. Getting to the normal ending plus the DLC took up 67 hours, there was no way I was going to do all that capturing.
Reactions: Pifanjr and Brian Boru
J

Zloth said:
Oh, yeah, I did that as well - even though the lootbox junk was tamed by the time I played the game. Getting to the normal ending plus the DLC took up 67 hours, there was no way I was going to do all that capturing.
Click to expand...

If i recall they even admitted that their monetisation was killing end game and it pissed off the suckers who did splurge on the game. I just looked at the requirements to earn loot boxes for free and i just noped out of that grindfest.

After seeing it on youtube i can confidently say that i made the right decision to stop playing the game after beating all the main game and the DLC.
Reactions: Pifanjr, Brian Boru and Zloth

Mortal Kombat: Aftermath DLC. Bought it thinking, I'll finish it on a weekend but got super busy with irl things during that time. I ended up watching the story on youtube during my office break hours, I'll probably never play that DLC by myself.
Reactions: Brian Boru and Pifanjr
You must log in or register to reply here.
Share:
Facebook Twitter Reddit Tumblr WhatsApp Email Link