Hey everyone. Have not built a PC in about 15 years. (console gamer)

I am gradually purchasing parts and getting to point to purchase CPU and MB. I had my eye on the ASUS ROG X570 E gaming. With this board being at $300 I was wondering If going for the TUF X570 board would be any noticeable difference. I know the TUF board is a good board. But wanted to make sure I was not limiting myself for future upgrades.

Here is my current build plans

You won't notice any difference.

Gaming performance would be the same.

The TUF X570 PLUS doesn't support SLI, but SLI is itself less supported by Nvidia, new technologies like TAA make many games incompatible (and even where TAA isn't an issue, it's often still not supported anyway)... i.e. $100-140 for a tech you won't use isn't a good use of money.

They're the same socket and chipset, so will support the same CPUs.

X570 PLUS lacks a front USB 3.1 Gen 2 connector. But it has that at the back and unless you have USB 3.1 Gen 2 devices slipping through your fingers, that's not an issue. I expect you don't even own 1 currently

So go with the PLUS - it's a much better buy. It has all you need, and more, and the things it doesn't have you're not going to miss.

What monitor are you intending to game on?

And what PSU are you going with?
Reactions: Frindis and Zoid

I would suggest scrapping the 3.5 HDD for either an SSD or M.2. There are plenty to choose from an the prices are pretty competitive from manufactuers these days. You'll thank yourself later after scrapping the HDD for a better preforming and more reliable drive.

Thanks for the quick responses. Yeah the USB connection isnt a big deal lol Also didnt plan on SLI. So thanks for the info.

I have the 3.5 already. I use it in a current hand me down as a plex server. But wouldnt be opposed to SSD for games. leave the 3.5 for media files.

I was also going to go with a AIO cpu cooler. I know I could save here with a fan cooler but I prefer the AIO here.

I was going to game on my tv for the time with a Samsung QLED Q9. I do plan on going to a monitor setup once I get my spare room cleared out for a desk.

As far as PSU I was looking at Corsair RM750 80+gold fully modular. PSU I dont really know what else to look for other than 80+gold and being fully modular.
PC part picker has my estimated wattage at 455w.
Reactions: Zoid

That's a good PSU - 750W is more than you're going to need but in view of the slim price differences there usually seem to be between that and say 650W, it's fine.

2080 Super is appropriate for 4k gaming on your 4k TV. And will be good for a range of resolutions and refresh rates once you get a monitor.

AIO cooler is fine, if that's what you want.

What AIO models were you looking at, and what SSD models?
Reactions: iamfakejesus

I was looking at the NZXT AIOx 63 for looks and matching my case. I hear the CAM software isnt good. But has gotten better. I probably will just set the rgb an leave it. I prefer a single color not the unicorn puke that is the trend.

I think I will def be fine with the 2080. I will probably wait last to order the GPU for prices drops if anything new is announced. I know there are talks of the AMD cards coming. But when...And hopefully announcement of the next Nvidia cards drops some prices. But Im not holding my breath.

Overall this is a good build. I'm jealous of that GPU budget! @Oussebon has already given you good feedback, so I'll just add my agreement as a second voice. The TUF X570 board is a better buy, as mentioned. Boards like the ROG X570 E that are in the $300 price range are almost never worth the huge cost unless you have need of very specific features.

The Corsair RM750 is a good PSU, so you're fine there. If it was me doing this build then I would bump the SSD storage up to 1TB, just because 500GB disappears really quickly when games are 70+GB these days, but you do you based on your needs. As for that NZXT AIO, that's a reasonable choice if you want to go the AIO route. I have a smaller NZXT AIO cooling an R7 3800X in my mini ITX build, and it does the job well enough. The CAM software is fine. Not great, but fine.

This will be quite a beefy rig when it's done. If you haven't built a PC in 15 years then you're in for a treat. The Ryzen 7 3700 is miles faster than CPUs from even 5 years ago, let alone 15, and the 2080 Super is obviously a monster. Have fun!
Reactions: Frindis, iamfakejesus and Oussebon

Are you using CAM to adjust your fans and overclocking ect? Or just the RGB.

I was in HS last time and just messed with everything via BIOS. Now it seems all the big brands have some sort of control center software. I have seen the MSI on a friends laptop and it seemed ok. CAM looks easier on the eyes. But it seems like you have to have stay in a compatible eco system or run multiple software. But I dont plan on doing much overclocking...at this time lol. Just controlling the fans curve ect will be fine for me.

Are you using CAM to adjust your fans and overclocking ect? Or just the RGB.

I was in HS last time and just messed with everything via BIOS. Now it seems all the big brands have some sort of control center software. I have seen the MSI on a friends laptop and it seemed ok. CAM looks easier on the eyes. But it seems like you have to have stay in a compatible eco system or run multiple software. But I dont plan on doing much overclocking...at this time lol. Just controlling the fans curve ect will be fine for me.
Click to expand...

I use CAM for RGB, controlling AIO pump speed, and a CPU fan curve. You would not need to use it for any fan curves if you don't want to, it just made the most sense for me because of where my fan connectors were located. I control all other chassis fans through the UEFI BIOS. My fans all default to max speed so if CAM ever failed it wouldn't be a big issue.

I do not use CAM for overclocking and would not recommend it for that. I recommend Ryzen Master for CPU overclocking, MSI Afterburner for GPU overclocking, and if you want to mess with RAM tweaking then you can use this Ryzen DRAM Calculator to help tweak timings.
Reactions: iamfakejesus and Oussebon

Yeah I dont plan on messing with any oc or ram timings. I feel this rig will do what Im hoping for. 1440/4k gaming at high settings. Fans and RGB will all I will mess with. Other than that I will just monitor my temps.

Thanks you all have been helpful. I will update as things come along or run into any questions.
Reactions: Zoid and Oussebon

iamfakejesus said:
Yeah I dont plan on messing with any oc or ram timings. I feel this rig will do what Im hoping for. 1440/4k gaming at high settings. Fans and RGB will all I will mess with. Other than that I will just monitor my temps.

Thanks you all have been helpful. I will update as things come along or run into any questions.
Click to expand...

Definitely keep us updated and show off the final build when it's done!
Reactions: amanda90

Hope you guys are being safe in this crazy time.

Just a quick update. Just ordered 2070 Super. I got notification best buy had back instock. Jumped on the founders edition. I had a 10% off birthday coupon and best buy reward gift cards. Got the gpu for $430 after taxes. Not bad deal imo. Happy birthday. Should be here in a week. Just need the CPU and motherboard. Opening my options up past ASUS as I have noticed the TUF board is going in and out of stock. Looking at Auros and Asus boards. Will get the Ryzen 7 3700 in the next few weeks.

Here is a random pic of some of the build sitting and waiting. 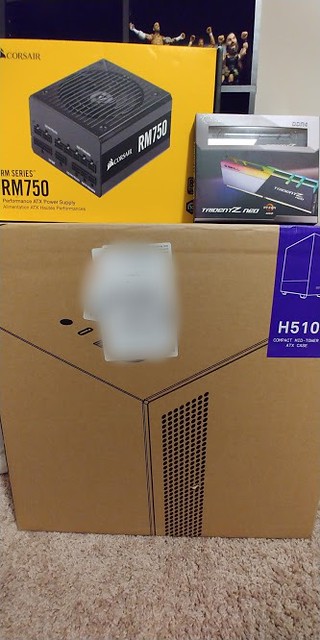 Great to hear it's all progressing

Don't leave the components all sat in boxes and unbuilt for too long - as if they are faulty you don't want to be out of the returns window with the store you got them from. Ofc they should be under warranty but RMAs with a manufacturer often don't cover postage costs, whereas stores may do free returns / exchanges especially for DOA items.
Reactions: iamfakejesus and Zoid

Congrats on the progress - can't wait to see it when it's done!

So with the stimulus checks and being an "essential" worker. I also received a bonus and pay raise at work. Jumped on all components and should be here this tues 4/21. Here are all the parts.

I felt I got some good prices on these. I went back and forth on mobo between Asus TUF, and Aorus boards. I liked the elite but with the extra cash I jumped on the Pro.

So tuesday I will dive into putting this thing together. Today I cleaned up my entertainment console organizing wires and labeling everything. Will def update with pictures.
Last edited: Apr 19, 2020
Reactions: Zoid and Oussebon

So I put everything together last night. I got it to boot to bios. Tonight I will setup windows and continue to set everything up. Here is some quick pictures I took. Nothing special. 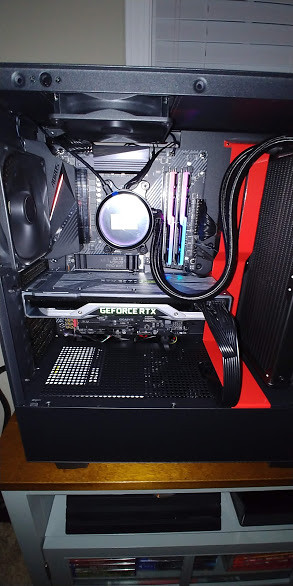 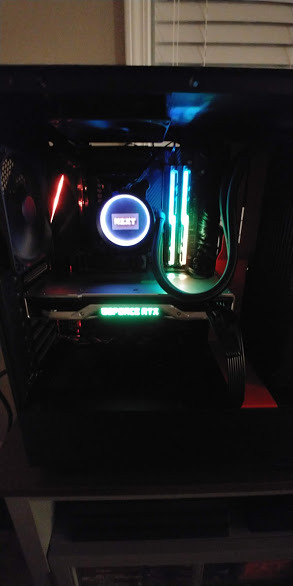 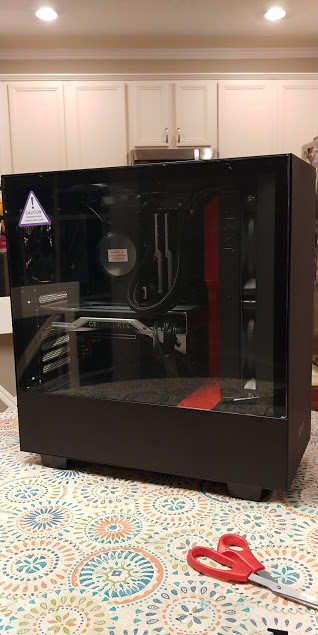 I'm not familiar with AIO water coolers from personal experience, but I gather there's an argument for the tubes to be down rather than up:
View: https://www.youtube.com/watch?v=yaV3PNquqb8&feature=youtu.be&t=171

I def did alot of researching on the AIO. Seems to be little failures. I watch alot of gamer nexus and have seen some of his breakdowns. I plan to run this AIO for like 2 years then upgrade to one with led screen like the z63 or whatever model is out then. I couldnt splurge for that right now. Esp with pc not being fully on display it would just be a wasted $100 upgrade. As far as tubes running to top or bottom. With the size of the GPU it was just not possible to run to bottom. Also all images and the manual shows to top. Im not to worries about it from my research.

But I hope to get windows installedand have this running tonight. I will be watching the draft and have family so hopefully I get some of this done tonight. Thanks for the help getting to this point. Will update with more pictures once I get the led config and better pictures.
Reactions: Zoid and Oussebon

Bringing this post from the dead I finally sat down and completed the build on pcpartpicker.

PC has been awesome. Playing Warzone, MK11, RDR2, any many more with max settings just about at 1440p. Thanks again for all the help

If you want to check everything out here is the link.