How does the front IO work?

Looking to build a new computer which I will be using to play a bit of vr and i was wondering how front io works and whether i need to buy a board that has stuff to connect to the usb c on the front io or if all motherboards will connect up to front io?

All motherboards have connections on it that connect to the front IO. The case will come with these connectors. These usually are on/off, reset/ HDD LED, and front audio.

Then there probably will be a USB 3.0 cable from the case that you can connect to your motherboard in order to use the front USB connections. 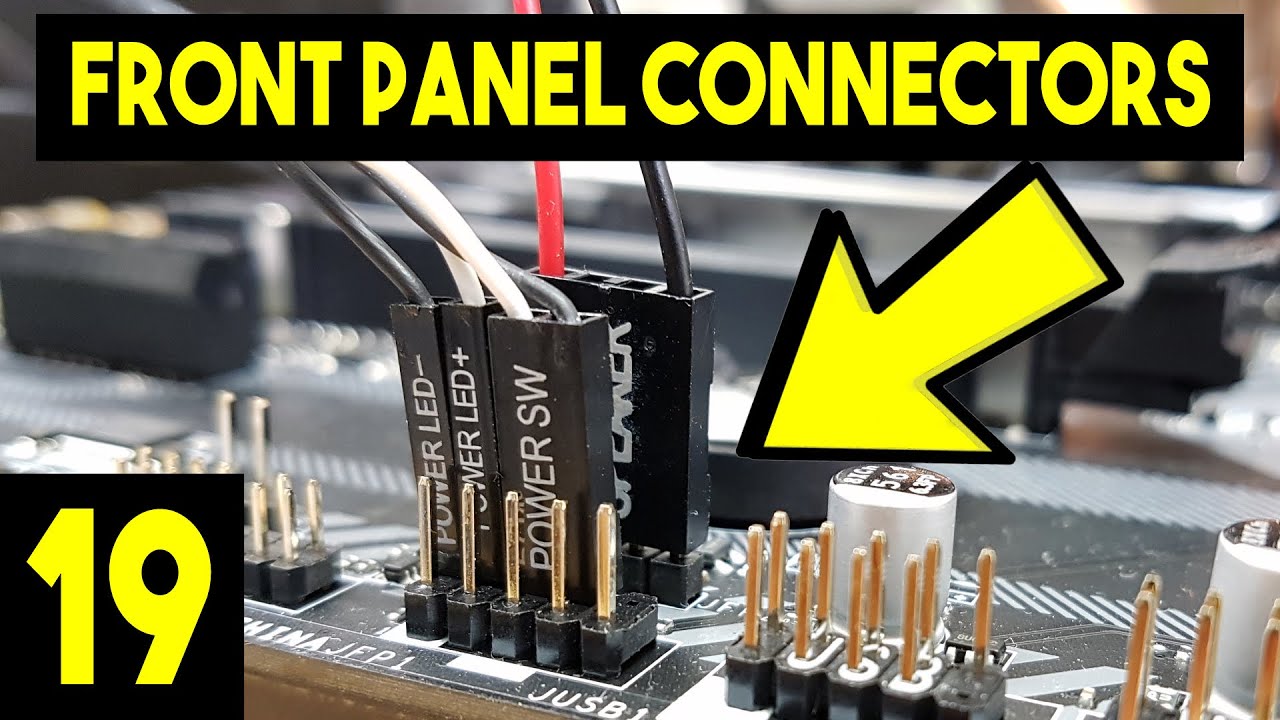 If it has usb c on the front io will the case come with the cable and are all the connections n the motherboard the same?

Oh I think I got your question wrong. If you want to connect a front USB-C to your motherboard, your motherboard does need a header for it. Quite honestly I can't just say out of the blue which ones do and don't have USB-C headers.

I have trouble figuring out but so far I think my motherboard does have a connector for example. X470 and X570 look exactly the same for the connector but 1 says it's a USB-C header, and the other one says it's USB 3.1 lol.
Reactions: Oussebon, Sporky and Frindis

Ahh okay thank you that helps a lot
Reactions: SWard

For instance, the Gigabyte Z390 Aorus Pro has a connector for type C front USB that is only USB 3.1 Gen 1 (5gbps).

So you need a case with a front USB connector. And to connect the case's USB C lead to the motherboard, you'll need the motherboard to have a USB type C header. And you'll probably want to make sure it's a 10gbps USB C header if you're going through the trouble of getting one at all, especially for VR
Reactions: Sporky and Inspireless Llama

Do you have any somewhat budget amd ones?

I cant seem to find any

Front USB 3.1 Gen 2 (front panel) and budget aren't terms you typically expect to find together. What sort of price range are you hoping for?

What's the full budget for your system and your prospective spec at the moment?
Last edited: Sunday at 8:48 AM
Reactions: Sporky

I've found on a couple of other forums that you can use usb 3.1 gen 2 is that true?

Sporky said:
I've found on a couple of other forums that you can use usb 3.1 gen 2 is that true?
Click to expand...

Sorry, what are you asking?

I was asking whether you could use a header that is usb 3.1 gen 2 instead of a dedicated usb c header as those are more common and i found on some forums that you could use them instead

I can't immediately name any motherboards that have USB 3.1 Gen 2 type A headers for the front panel.

Lots of motherboards have 3.1 Gen 2 type A headers at the rear - is that what people were talking about?

Oussebon said:
I can't immediately name any motherboards that have USB 3.1 Gen 2 type A headers for the front panel.

Lots of motherboards have 3.1 Gen 2 type A headers at the rear - is that what people were talking about?
Click to expand...

Nope. My Asus Prime X470-Pro actually says it has that header for front panel. Which makes it very confusing compared to the Asus Prime X570-Pro manual. 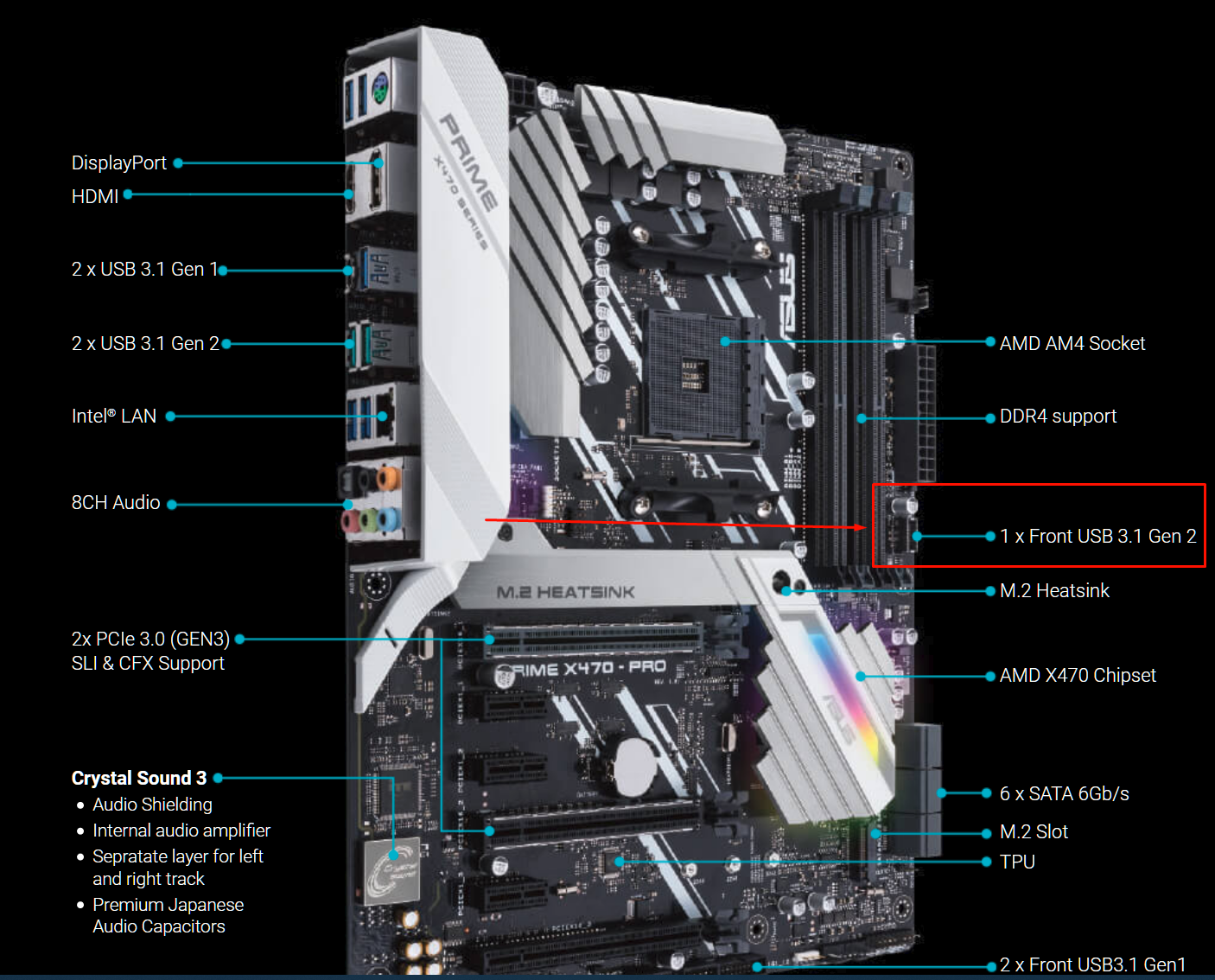 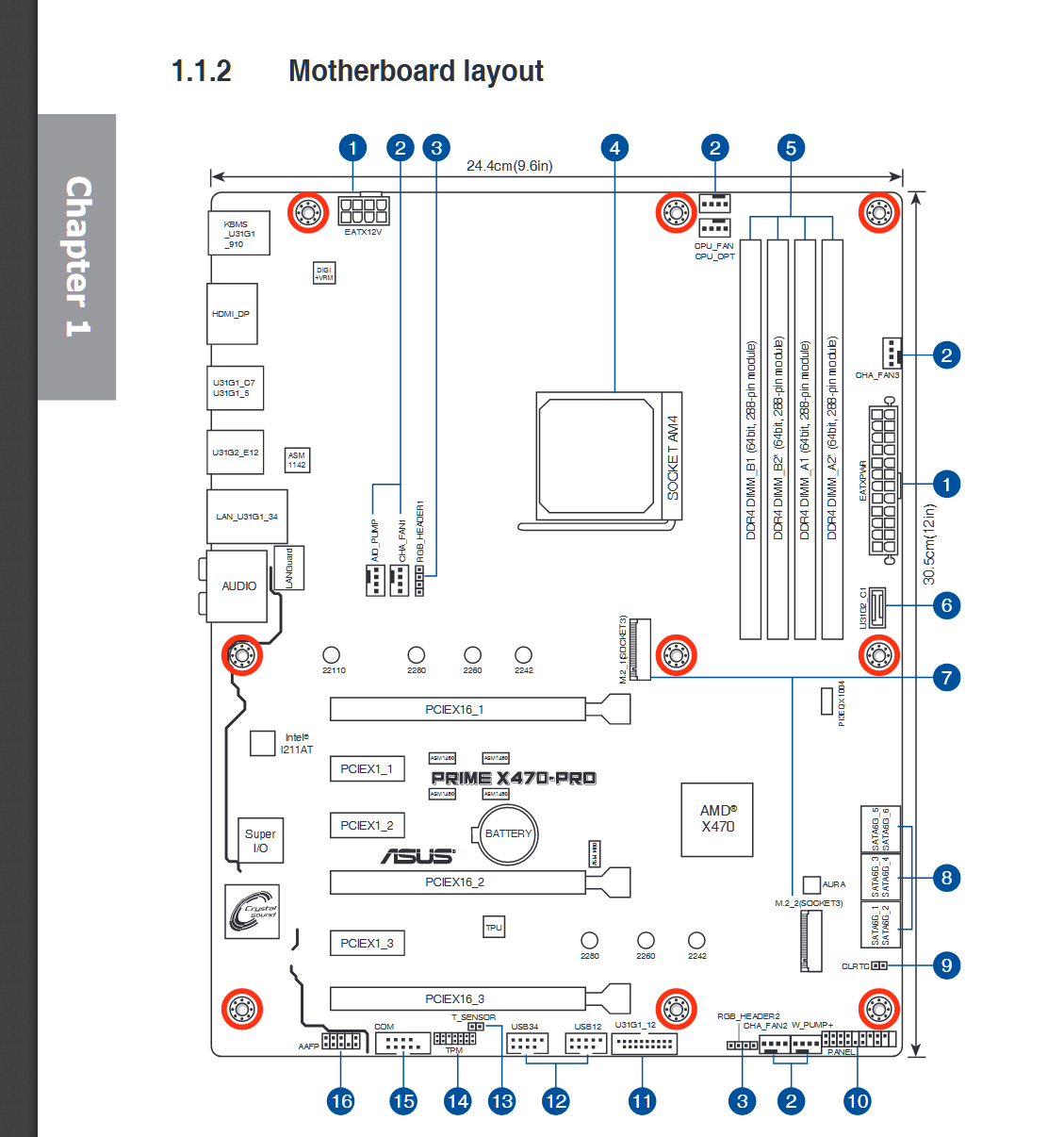 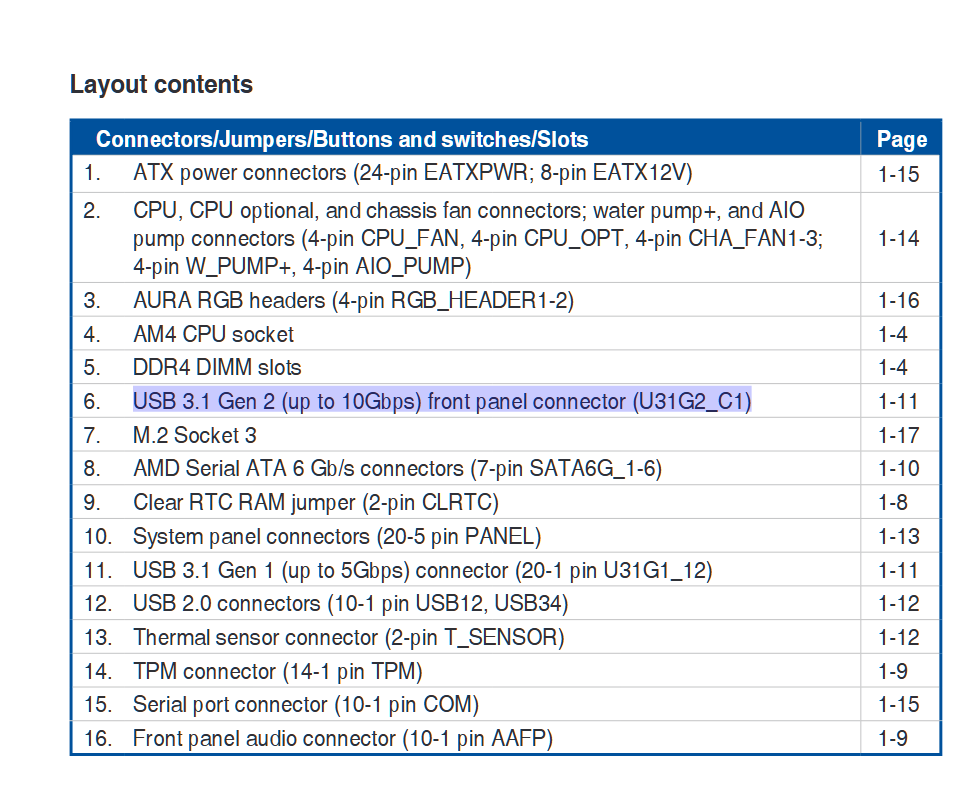 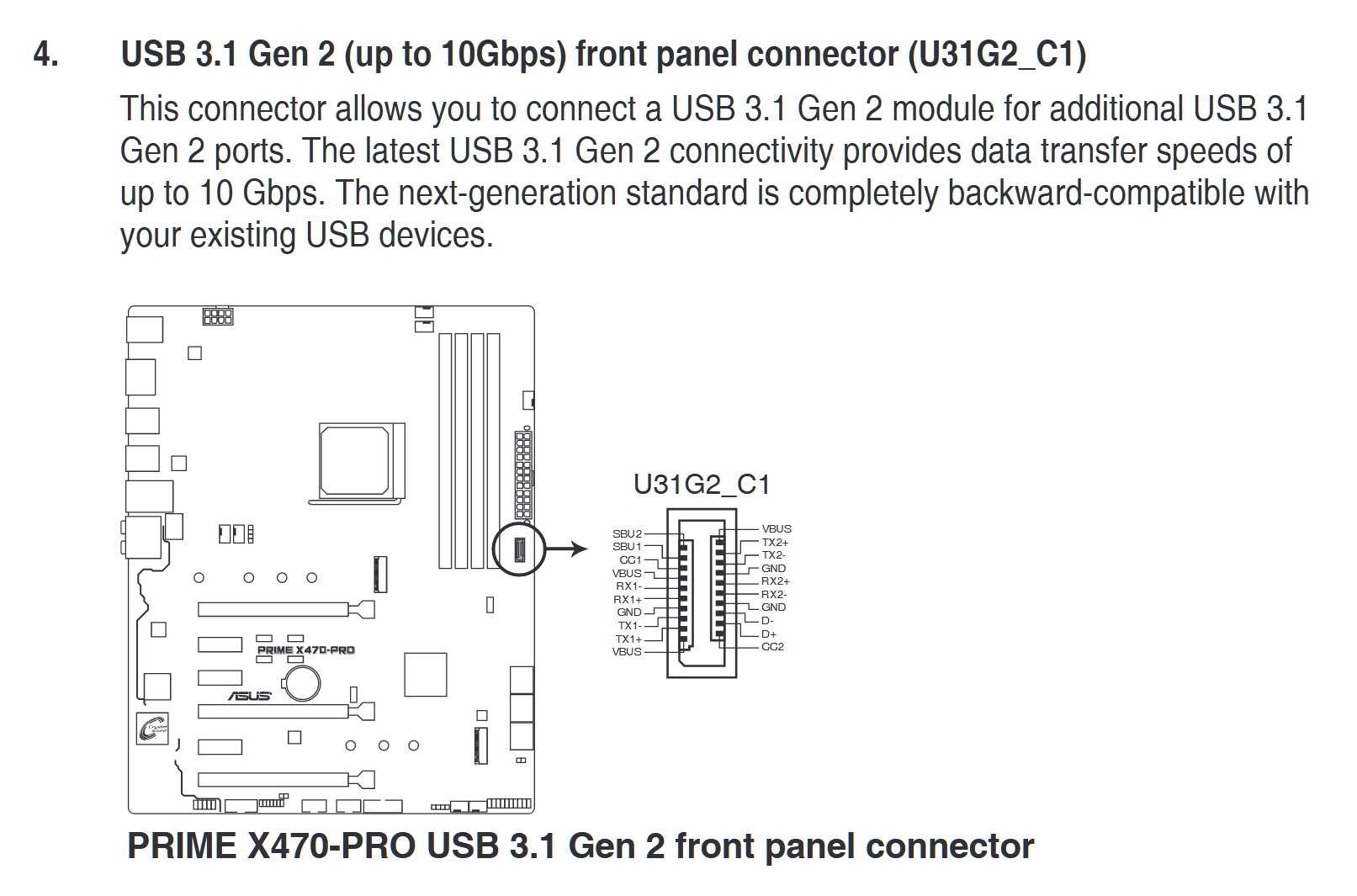 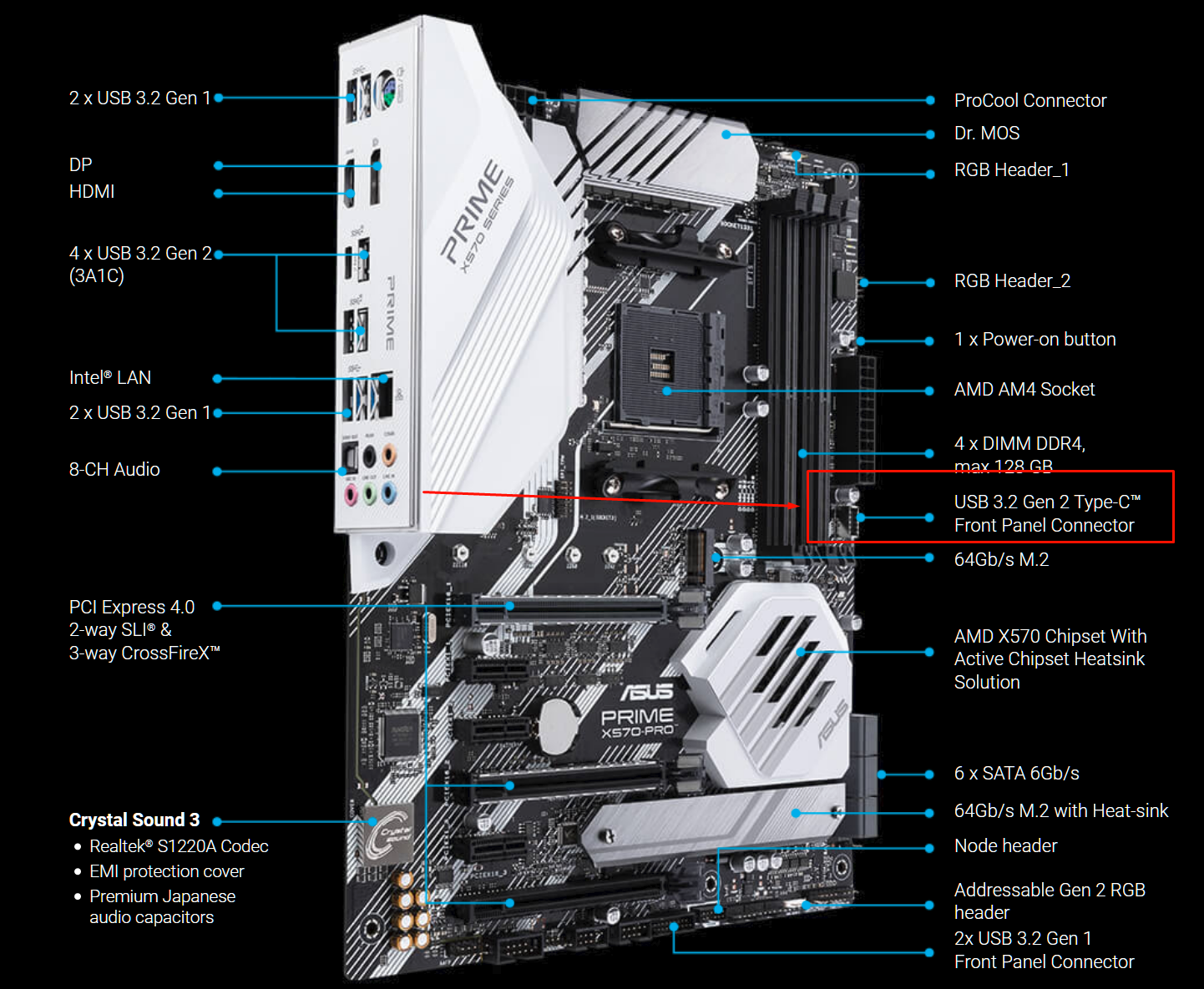 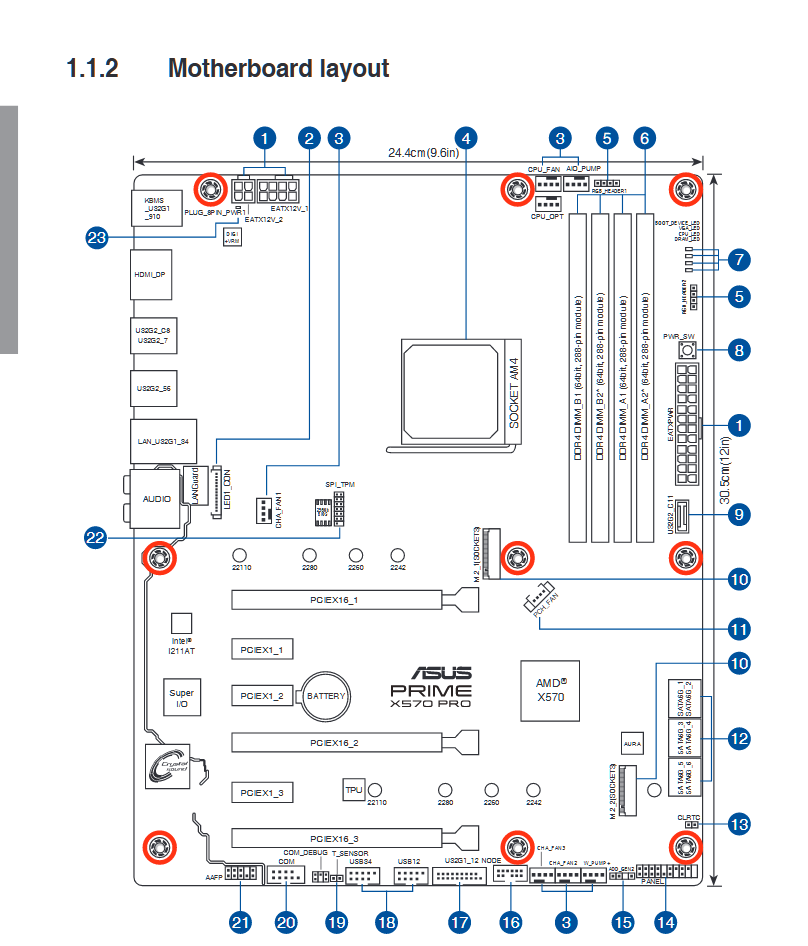 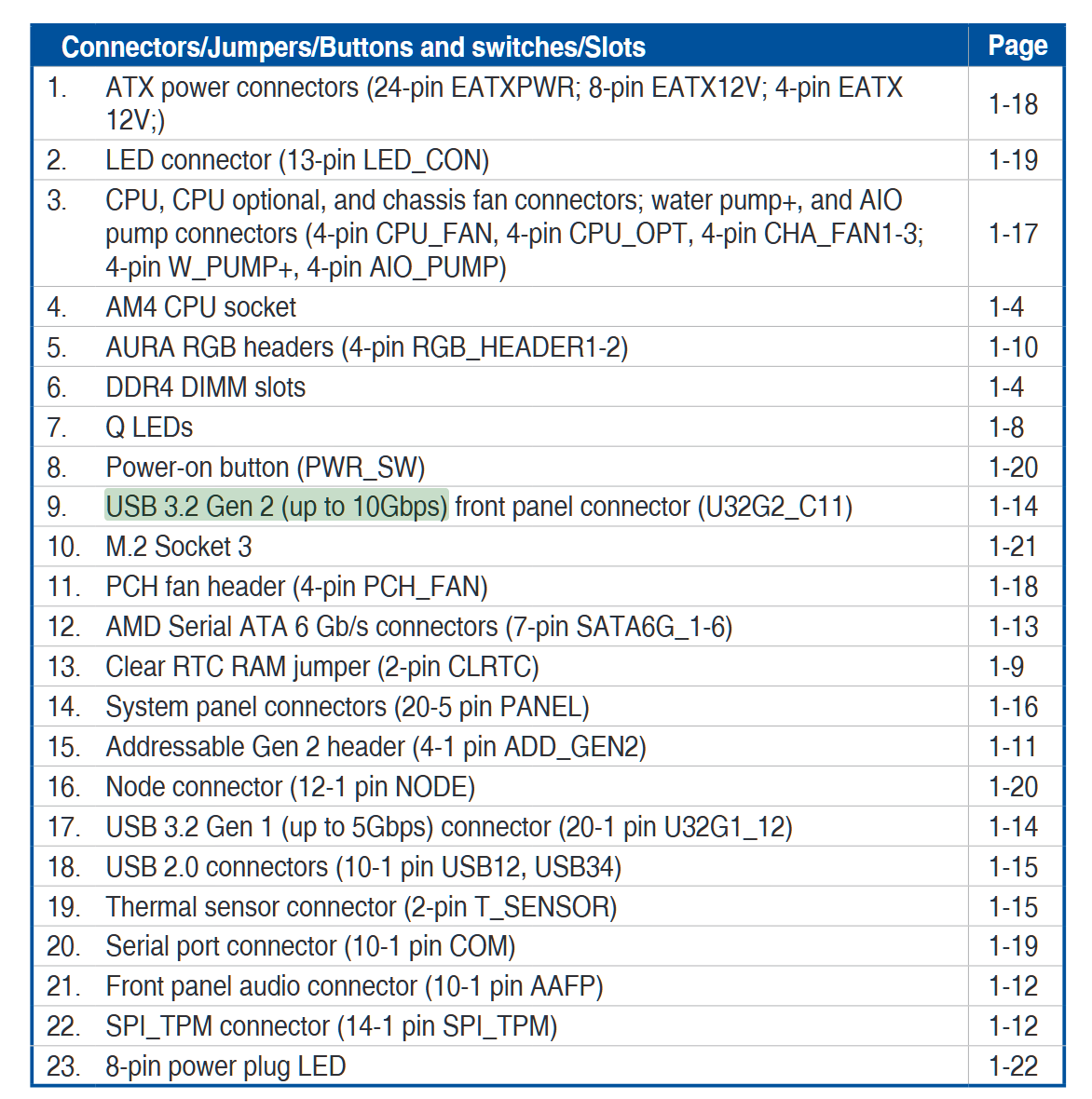 What am I trying to say?

I'm trying to say here that the webpage for the Asus X470 Pro says it's a Front USB 3.2 connector, while the X570 webpage says it's a front USB-C. They look the same and are at exactly the same spot. I checked the manual for it, I even compared the individual connectors and they're all the same (see last picture in both spoilers), making me think that the advertised "Front USB 3.1 gen 2" connector is the same as the USB-C header from the X570. I found it very confusing.

So there are motherboards who say they have a front USB 3.1 header. But I don't think they're regular USB 3 headers (they're usually at the bottom of the motherboard).

I don't know what your nope means because what you post then underlines what I just said.

It's the same connector on both boards you mentioned. And it's meant for type C front USB. On the X470 booklet you can even see the connector is called "U31G2_C1"

The point is that it's not a cheaper type A connector that the OP can find on a more "budget" board and then use an adapter for.

The only cheaper-board-that-has-type-A-and-not-type-C wouldn't refer to an internal header for the front panel but a B450 board that has Gen 2 type A only around the back.

Oh I meant "nope" to your comment that you can't name any board that as a USB 3.1 gen 2 connector for the front panel, which I could and found very confusing Should have made that clear. The issue I had and where I had to read the manual (which I only do AFTER I get the motherboard) to find out wether it was a USB-C header or not.

But basically I think that if a mobo says "Front USB 3.1 Gen 2" it will mean a USB-C header right? Even though gen 2 doesn't mean it's Type C, and a type C connection won't mean it's gen 2.

As to your last alinea, I just looked up the B450 Tomahawk as you recommend it often and I think I get what you mean. When speaking about USB 3.1 (gen 2) it does refer to the USB-C connection at the back of the motherboard, not about a header.


Sporky said:
whether you could use a header that is usb 3.1 gen 2 instead of a dedicated usb c header as those are more common and i found on some forums that you could use them instead
Click to expand...

Oussebon said:
I can't immediately name any motherboards that have USB 3.1 Gen 2 type A headers for the front panel.
Click to expand...

i.e. you can't get a cheaper motherboard that has a different 3.1 Gen 2 internal header for type A at the front. They're all the same and often a relatively premium feature.