I am getting back into Battletech lately. After completing the story I had bought the season pass but then got distracted by other games in my backlog. Now I'm back trying out an Ironman Career Mode.

Have any of you played Battletech? Do you have any of the DLC or the season pass? Did you complete the story? More than once? Have you played the Career or Skirmish modes? What are your favorite parts of the game? Gripes?
Reactions: Asanudin

I never did Ironman but I did do career mode. I also started to replay the campaign but with the "8 parts to rebuild a mech" rule, which was NOT a good idea. It takes way too long to get anything together requiring that many parts! Still, upping it to 4 works out nicely as it makes it impossible to earn a big, new mech with just a single, lucky headshot.

Career mode works fine now with the 'Heavy Metal' series of missions to play with. They don't take you through the entire game but they take you through enough. There's some other fun ones, too. You can play them all after the campaign but you'll be so strong at that point that I don't think they'll challenge you much. Plus several have weight limits to encourage you to keep some lights and mediums around.

I did some Skirmish for achievements and to test out some builds. I only ever played single player.

When I started my career mode run, I got handed a Vulcan 2T. Those come with a really sad weapon loadout but I was able to change it to this: 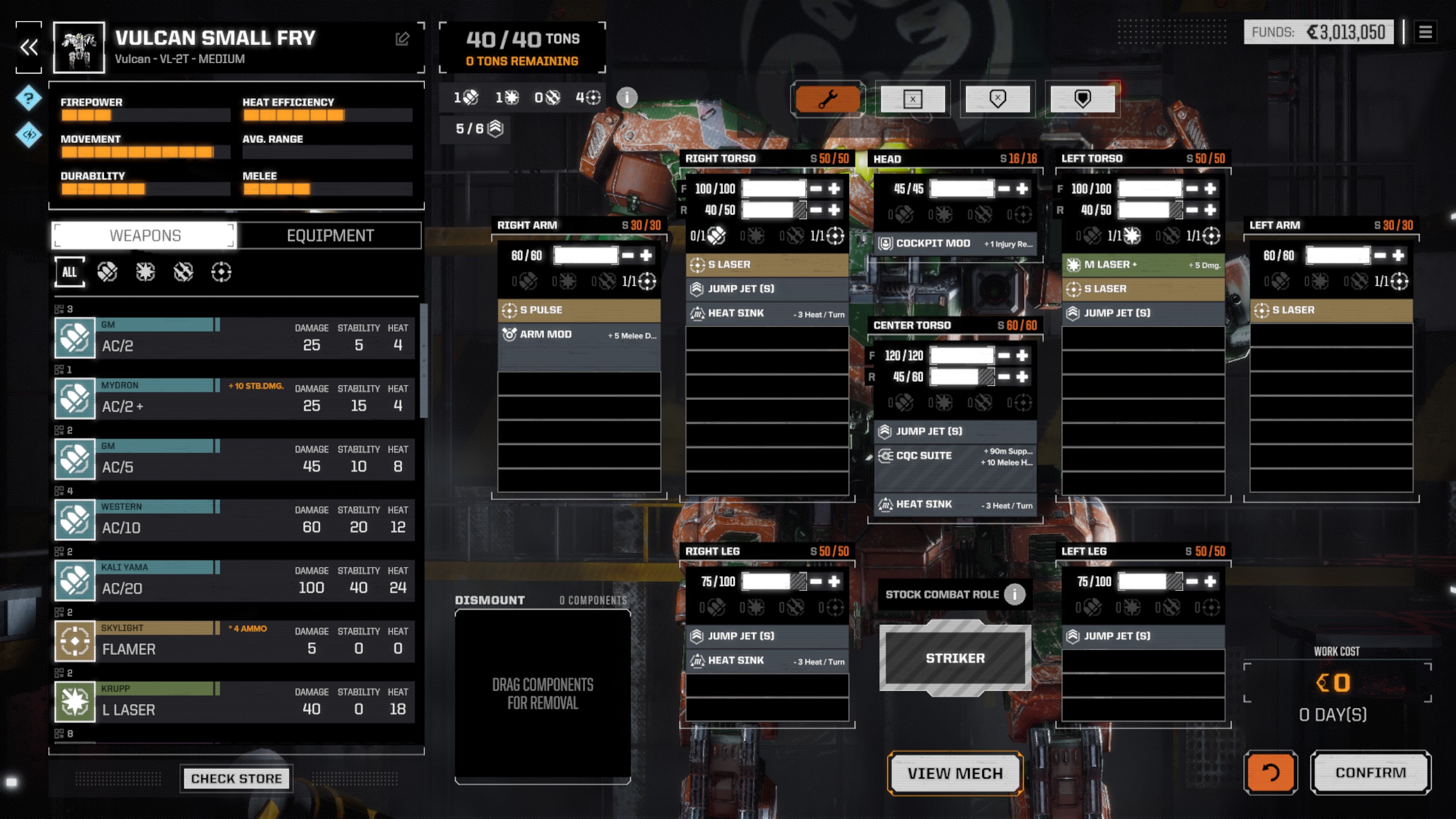 That worked VERY well! In fact, I used that mech until I could get a good, solid heavy mech to replace it. It's fast, pretty heat efficient, and that CQC thing gives the small lasers the range of mediums. It could flank enemies or jump behind them and punch something's back then melt it with SLaser fire. After some upgrades (including another S Pulse laser), it was able to deal with the BIG! STEEL! CLAW!

When I stopped playing, the UAC weapons were (to my mind) somewhat too easy to find. Those things are horribly deadly! The MAD-3R's called shot bonus makes it a bit too strong as a 'head hunter' mech, too. Hopefully they've been tweaked a little since then.
Reactions: Asanudin and McStabStab

I own Battletech, and I like it, but it seems a little too rocks/paper/scissors for me to get fully involved. The DLC prices are still way too high for me to explore those.

And, I will always approach Mech games with a bit of bias because I played the original Earthsiege (if only a demo) and the original Battledrome.
Reactions: Asanudin

?? Rock/paper/scissors? Huh? I don't see how that applies to BattleTech.

spvtnik1 said:
I own Battletech, and I like it, but it seems a little too rocks/paper/scissors for me to get fully involved. The DLC prices are still way too high for me to explore those.
Click to expand...

The base game has enough content for the single player campaign. I'm playing some of the DLC content in a follow up Career mode game but if you just have vanilla BattleTech I believe you'd enjoy it just the same.

I also am not sure what you mean by the rock/paper/scissors analogy. The game is mostly about mech tonnage and maneuvering. Instead of finding cover and overwatch like XCOM it's more about making sure you're not leaving your weak points exposed and being able to trade blows with other mechs of your size.

I believe the game opens up after the main campaign to sort of an endless run type thing, right? Or maybe that was on one of the DLCs.


McStabStab said:
I also am not sure what you mean by the rock/paper/scissors analogy.
Click to expand...

Maybe I'm mistaken but with the hit/miss system Battletech just felt more like XCOM than say, Wargame (but turn-based). And that's totally fine, I understand that the game is truthful or close to the old table-top mechanics, and I'm probably just not playing the game right

It will definitely get another chance at some point.

Edit: One thing that really hurt is early on in my experience the game updated and reset all my pilot's skill trees, it made me rage quit that campaign and start over, and that has been the hurdle to get over.

spvtnik1 said:
I believe the game opens up after the main campaign to sort of an endless run type thing, right? Or maybe that was on one of the DLCs.
Click to expand...

It lets you keep playing if you want. I kept playing a little longer to get the achievement for collecting all the mech types. It's easy to get confused, though, because there's also a "career mode" that's part of the first DLC then expanded in the third DLC. You can play the career mode content after finishing the main campaign but I think the point of career mode is for a second play-through. When playing in career mode, the main story goes away and is replaced by a bunch of small stories (and one medium-long one if you get the third DLC). Instead of trying to beat a campaign, you're trying to earn as many points as you can over a certain number of years. It's a nice way to change the game up so the second play-through isn't exactly like the first.

BattleTech is definitely a LOT like XCOM when it comes to combat but BattleTech lets you modify your mechs.

Edit: One thing that really hurt is early on in my experience the game updated and reset all my pilot's skill trees, it made me rage quit that campaign and start over, and that has been the hurdle to get over.
Click to expand...

I remember that!! But it only took the skill assignments away - you still had all your skill points. You just save the game, pick out the new skills that sound good, try them out, and if they aren't good then re-load the save. They had to do that to get the skill balance a little better.

There's been another big change since you left: knockdown isn't as easy to get. Originally, it got to be so the heavier mechs were always getting knocked over so they made it harder for the bigger mechs. There are more mission types, too.
Reactions: spvtnik1

Locking thread to prevent necromancy/spam. OP, if you'd like to revisit this thread, please PM me.
Reactions: McStabStab