Well, first of all welcome to all our new joiners this week. Since we have a lot of Cyberpunk fans with us (including myself) I thought we could talk about potential backstories for our charecters in Cyberpunk! 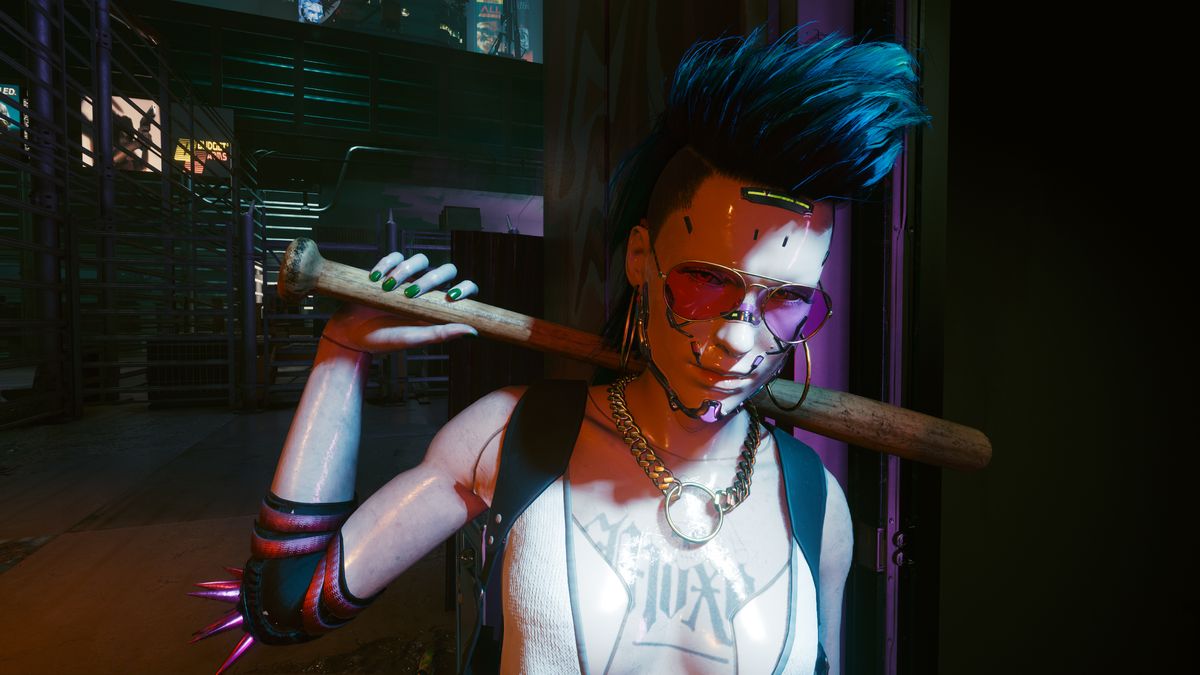 Cyberpunk 2077 updates: Every patch and hotfix so far

Here's our running catalog of all of Cyberpunk 2077's fixes since launch.

At E3 2019, quest director Mateusz Tomaszkiewicz explained to Gamasutra that Cyberpunk's character creation won't be limited by gender. "We have put a lot of thought into this. One of the things we want to do in the final game (which we couldn't show in the demo yet, because as you mentioned it's a work in progress) is to give the players as many options of customization in the beginning of the game as we can."
CDPR is also working on customizable voices for V. Tomaszkiewicz did specify at the time that these are all things the team "wants to do," not already has done, so there's no surefire promises that this will carry into the final game. You can also change your stats. There are basics like Strength and Intelligence, but also a 'Cool' stat that determines how well you handle stress, which affects weapon accuracy. The full list from what we saw in the demo: Strength, Constitution, Intelligence, Reflexes, Tech, Cool. Notably, there are some important stats from the tabletop Cyberpunk not represented here, like Empathy.

You can also change your backstory, referred to as a Lifepath, choosing from Nomad, Corpo or Street Kid, which each have their own origin story and starting location in the world. Each Lifepath unlocks unique dialogue options that can alter how quests play out, so it's an important decision to make early on.

So I'm super curious, what will your name be in Cyberpunk 2077, how are you hoping to customise your character and what will your Lifepath be? Looking forward to reading your answers!
Reactions: Frindis, Sarafan, CParsons and 1 other person

I'm going street samurai. I've done enough Shadowrun to know that a katana and bleeding edge cyberware (preferably initiative/speed boosting) is the way to make it.

For background, I'm totally going ex-corp. My main in tabletop rpgs with cyberpunk / dystopian is former "Human Resources Director", with human resources being a fanciful euphemism for corporate wetwork ops.
Reactions: Frindis, kokirae, Sarafan and 3 others

I was a top notch security expert for a high tech company awkwardly working with my ex-girlfriend and then there was an attack on our company and she was killed, I was almost killed but my body was just alive enough for me to be rebuilt with all sorts of high tech augmentations that I never asked for.

They won't let me be a former pro-wrestler who lost his ankles from a cyber figure four leglock gone wrong and had to have them replaced with pneumatic fists, so I'll likely be a Street Samurai, Street Kid and always choose the rowdiest dialogue options.
Reactions: Frindis, Sarafan, SWard and 1 other person

For my first playthrough I'll most likely pick a Netrunner with Street Kid background. I want to check whether the stealth path will be as good as in the new Deus Ex series. The class also defines the attributes. I'll try to max Intelligence and Tech, but probably will need something more in case my stealth attempts fail. As for the name, I'm not sure whether we'll get a choice here. Maybe we'll be forced to stay with V. Or this will be only a nickname and we'll get an opportunity to name our character. We'll see how it goes.
Reactions: jpishgar and SWard

Ooo, stealth. I'm dying to hear if anyone out there plans on going the Face route, just a charisma/persuasion loadout. Pacifist runs are always entertaining to watch!
Reactions: Sarafan
G

I've always been partial to Charisma builds, so a highly charismatic character built around making his way through the city using only his words and his charms have me salivating. Of course, he'd have a specialization for pistol combat too, always a fan of gunslingers.

So in total, a dashing Rogue with quickdraw capabilities.

For Backstory, he'd be a street punk rising through the social ranks of the city until he has it all!
Reactions: Sarafan, SHaines, jpishgar and 1 other person

I want to make my character become unique with a future outfit and look coollllllllllllllll
Reactions: SWard

It will be fun to ride one of those old Piaggio Vespa 50...do not know if you guys remember but the original Cyberpunk game was giving the player many vehicles to choose among...one was the Vespa 50
Reactions: SWard and jpishgar

Just an ordinary guy who has been transferred to the consciousness of V (like an Isekai: D) who loves technology wants to start his life over as V to have an exciting mercenary life
Reactions: sicarus37, SWard and jpishgar

Harlock21 said:
the original Cyberpunk game was giving the player many vehicles to choose among...one was the Vespa 50
Click to expand...

From what I understand, there are quite a few vehicles we'll get to choose from, including the Quadra, Yaiba bike, Chevalier armored SUV, ThorTon, Archer, and Rayfield. In other future-dystopian settings, you can roll up a character who is all about vehicles. Rigger class in Shadowrun is one of them. Wondering if Cyberpunk is going to have some of the same great options.
Reactions: Harlock21

EDIT: Hopefully there will be no augs or low tech viability. I would love to be as close to core human as possible. I think it would be compelling and difficult trying to hold on to your humanity in a world which has none.
Reactions: SWard and jpishgar
R

I'm going to use the Corpo path with a twist that I work with both sides, not only corporations. It'll be hella fun bein ex-corpo working with nomads or valentinos.
Reactions: SWard and jpishgar

In Fallout New Vegas I had a character named Marshell Daws. Whether "Marshell" was his actual name or whether it stood for "Marshell of the law" was always left ambiguous. He was hardcore Lawful Good. Since then, any character in any RPG I've made has been a descendent or an ancestor or Marshell Daws, with varying degrees of alignment but always "Lawful" in some way. Whoever I end up making in Cyberpunk is going to be Lawful Chaotic (I know that's not a real alignment but it fits so I'm going with it) former officer of the law.
Reactions: SWard and jpishgar

In 2020 I was always a netrunner with a sweet nomad background (remember the picture of the nomad sitting on his rad tron bike?).
I'm a little concerned that netrunning isn't going to be cool enough in 2077.
Reactions: SWard and jpishgar

Since I probably won't be able to play a troll, I'll probably do my Decker, who lives in a shack under a freeway with enough explosives to take out a city block. Or face who uses dual pistols with hidden reload slides in his sleeves (think Christian Bale from Equilibrium)
Reactions: SWard and jpishgar

I will be the muscle V crushing and smashing everything with big guns. Will try to make a good character which is strong and when the scent of bad guys comes to him he will make sure that the only scent that will be in the air is from his weapons. I really would love to see some guns on the vehicles too. It's. Going. To. Be. CRAZY!
Reactions: SWard and jpishgar
H

Growing up on the streets has been hard for V's entire life. If it wasn't gang wars consuming neighborhoods, it was the forced relocation. He knew good people who died young and a few bad people who still walk the earth. Growing up in Night City taught him many lessons, one of which is thinking first. If you don't think on your feet, you won't survive. V hates his augments, but he's begrudgingly come to accept them since they've saved his life.
Night City is a hellhole and he won't let it simply chew him up and spit him out. He's gonna make enough to live comfortably and protect what matters to him most. What matters to him most, you ask? That's a story for another time...
Reactions: SWard and jpishgar

Cid was raised only by his father, who worked for an infosec megacorp, and did his best to balance time with his son and time working, his father always wanted to tell him about his job but "classified information". One day he gave in and decided to tell him "a little bit", his father told him that there was something else out there, something big. That same night his father got a call, "congratulating" him, because he had received a raise, in less than 30 minutes they were already looking for him in jet black armored trucks, that day marking the last day his father was seen, and the first day Cid started learning; Cid discovers that there's an attic in the house, where he discovers belongings from his father, grandfather, and great-grandfather, all with something related to the same thing, all pointing out that there is something else they are not telling us.

After a year of "digesting" all the information, Cid starts his first runs looking for information about where his father is, what is that out there, that what the government hides, without much patience for slow and meticulous hacks, quite flashy when it comes to letting people know that someone was hacked by the one and only Cid S. Conrad, or as he goes online Cisco.
Reactions: SWard and jpishgar

NAME: SAIKO TAN
GENDER: MALE
BACKSTORY:
At a young age, Saiko's parents were killed in collateral damage between two street gangs in Pacifica. Taken over by his uncle living Watson, he grew up working as a cyber engineer in Santo Domingo. Fed up with his job, Saiko sought to find other options. With his masterful skills in tech and street knowledge, he surely can increase his ranks. Of course, it always comes with a price...
Last edited: May 4, 2020
Reactions: SWard, Zloth and jpishgar

Im going to go for a chaotic good scenario, like Malcolm Reynolds from Firefly. Im a fun loving fool but at the end of the day if you ain't important to the cause you’re getting left behind.
In terms of backstory, I was an orphan child, ran away from orphanage as soon as i could, got taken in by a gang. Was fortunate to be taken in, when they caught me stealing from their stashes to make enough money to feed myself.
Worked hard and helped out, became a useful cog in the machine, till it was my turn to take what I want.
Reactions: SWard and jpishgar

Street kid is way to go with femape V....that my first new game...second normad in gameplay+...but u know wat i will roll with each coz ama replay the whole game i dont know how many times.....a kick some a****
Reactions: SWard and jpishgar

Holy moly these are some awesome responses so far!
I kinda wonder if there's a way to wrangle a mini-Roll20 campaign in Cyberpunk with the lot of you.
Reactions: Lhondah

(Looks at how incredibly serious all the characters are.)

(Looks back at Alice through the Mirrorshades)