Question What was the specs of your very first gaming PC?

I am much interested on how you guys got into PC gaming and what hardware you were using back then.

Can you share your PC specs back then and laugh how puny it is compared to our hardware now?
Reactions: Frindis, Kaamos_Llama, SWard and 2 others

My first gaming PC was also my first PC (in the "IBM compatible" sense anyway). It was 486 DX2-66 with a 4x CDROM drive and a Soundblaster audio card. I don't remember the graphics that it had. Still, it was just after the boom started by Doom when I got into PC gaming, sometime around 1994 or 1995.

Jesus, it's been a while but from memory my first PC was a Pentium II 266Mhz CPU, 32mb RAM, 4GB HDD and no video card to start with. Can't remember the sound card but it was some sound blaster variant.

When I did finally break down and buy a video card it was a 3dFX Voodoo II 12MB. I remember being pissed that I didn't get the card that had that pretty decent Descent-clone Forsaken packaged with it.

Remember when computers were all beige? What was that about?
Reactions: Kaamos_Llama and bytetracker

That reminds me, before the PC I had an Amiga 500 which I love to this day. I don't have it anymore but I did pick up an Amiga 1000 on ebay years back which must be lying around somewhere waiting for me to fire up Zool 2 or Pinball Dreams.
Reactions: Kaamos_Llama and I Will Haunt You 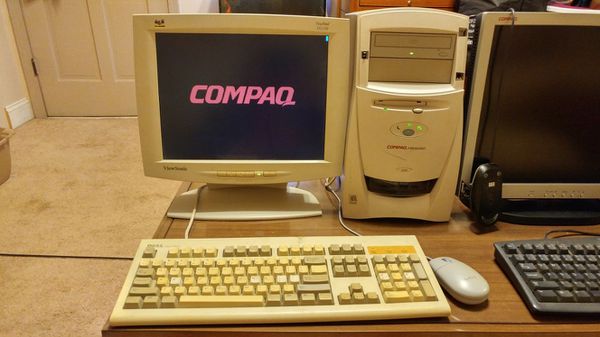 Reactions: indigit5l, Mazer, I Will Haunt You and 2 others

My first PC was the Compaq Presario (at least I think that was the brand) Pentium 66, but it was quickly replaced with the Compaq Presario Pentium 75 because of some type of error I can't quite remember. Other than that my oldest computer was the Atari 520ST which I still own. What is left from my Presario is my old hard drive and I do wonder what the younger me left in that one.
Reactions: JC Denton and Kaamos_Llama
A

Ah, the good old times. The first one to actually have a discreet gpu (if you can call it one) was an 850 mhz Celeron, a whopping 256 MB RAM, a Siluro T400, on an old gigabyte motherboard, 30 gigs of Maxtor storage, and all that in a fancy, no name white and purple case
Reactions: Kaamos_Llama
R

I had a 286 running DOS. I still remember tweaking the autoexec.bat files to get enough memory to run certain games.
Reactions: Arma8787 and Kaamos_Llama

Funny how there seems to be more Atari ST people then Amiga here! I had a 520STFM. Before that I had a 128k Spectrum +2 (built in tape deck, baby) and originally a 48k speccy with the rubber keys. I still have them all somewhere.

First PC though was a Windows 95 desktop. Pentium 100 with 8MB RAM. It had some pre 3d 32bit Cirrus logic graphics and a Soundblaster compatible of some kind. It came with a 14 inch monitor at 1280x1024 max IIRC although that looked tiny when there wasnt any scaling in Windows at the time. Or at least I wasn't aware.

I remember the specs well because it was before we had the internet. I had a very specific budget and as an early teenager at that point I combed the PC mags of the time looking for the cheapest way I could get the fastest hardware possible for my money.

Hardware was way more expensive than now, even if there werent the €1200 2080Tis. You can really put something together quite cheap today and still be able to do have a decent experience, back then my low mid range machine cost £999, adjusted for inflation you could put something pretty good together today with that money.
Reactions: bytetracker

@Kaamos_Llama I owned the Amiga 1200. Used to play Cannon Fodder, Stunt Car Racer, Skidmarks & Dreamweb, to mention some of my favorite games on it. A solid machine!
Last edited: Feb 14, 2020
Reactions: Mazer and Kaamos_Llama

I Will Haunt You said:
My first gaming PC was also my first PC (in the "IBM compatible" sense anyway). It was 486 DX2-66 with a 4x CDROM drive and a Soundblaster audio card. I don't remember the graphics that it had. Still, it was just after the boom started by Doom when I got into PC gaming, sometime around 1994 or 1995.
Click to expand...

Pretty much same, some 486 processor with CD drive, don't remember much else other than Doom II was taking up SO MUCH SPACE and I spent way more time in DOS than in Windows 3.11. It was around 1995-1997 I guess, damn that was quite a bit ago.
Reactions: Mazer, I Will Haunt You and Kaamos_Llama

@Frindis The 1200 was very nice! I had friend with Amigas too.

I played Stunt Car Racer a lot on my ST. In the later days games started to require 1 mb RAM and my old 520 only had 1/2 a meg.

Even more frustrating because my parents bought me Chaos Engine and Street Fighter 2 for Xmas one year and I could never play them. Not a problem when you're an Amiga 1200 person I suppose
Reactions: Mazer and Frindis

When I was young my Dad bought a 486 SX 25 I think. And then got a pentium overclock chip to boost the clock frequency.

The first gaming PC I bought myself was in 2001, an Athlon XP something. With a Geforce 4 series (I think).

It all seems so long ago now.
Reactions: Krud

My first PC was a Dell that I bought in 2001. Dell didn't make gaming PCs at the time so I had to upgrade their standard offerings. It had a 1.9 GHz CPU, 80GB HDD, Nvidia 64MB GPU ($350!) 256MB RAM (RAMBUS so it would have cost me $1000 just to upgrade to 1GB!), and a Trinitron 20" CRT (heavy!). The whole thing cost me around $3000. Believe it or not, it played Half-Life 2 with nary a hitch. I still have it. I remember taking it to inComp USA and they looked at me like I was handing them a towering pile of junk. They told me that the PSU was blown and that they couldn't repair due to Dell's proprietary nature. Turned out one of my RAM chips had died and my PSU was fine. Oh well, they're gone and I'm still here.

Watch your language.
Moderator
Lutfij
Last edited by a moderator: Feb 15, 2020
Reactions: Krud and I Will Haunt You
S

And a little bit later...

Had a 386 with no CD-ROM or sound card running 3.1 for most of the 90s, but in '98 I had my first gaming PC was a black futuristic looking Compaq Pentium II. I don't recall the specs but I did install a Diamond Monster 3D accelerator card in it. Spent a lot of time modding in skins and maps into Unreal Tournament.

My first gaming PC was also my first own computer.
I am pretty young, so the components are not that old.

Had to think about this. My first Gaming PC was built in 2008, so yeah. Some parts I don't remember but here it is:

I started playing games on something like a Tandy II with DOS. Eventually my parents got me my very own Windows 2000 machine from iBuyPower, and it served me well over the course of maybe one or two GPU upgrades. Then I learned you can't just dump new video cards in to an old computer and really get a great bump in performance. It wasn't until 2008 that I had to retire that machine and build a new one to play Fallout 3. And then that became pretty much the platform (AM3 at the time, now I'm on AM3+) that I've rocked over the course of 3 different CPUs (and even more GPUs) until today when I'll ready for the next build in a year or so.
Reactions: bytetracker and Krud

I started playing PC games in the mid 90s, but my first own PC was bought in 2000. It was a Celeron 466 MHz, 32 MB RAM and Riva TNT 2 32 MB. The RAM was a bottleneck. I remember that some games from the time required 64 MB RAM and it took a lot of patience to wait them to load and finally play... In 15 FPS of course. But these were great times nevertheless!
Last edited: Feb 17, 2020
Reactions: Mazer

*leans back in rocking chair*

Technically my first one was a color* TRS-80, with 64K of RAM, a ROM cartridge, cassette player, dot-matrix printer, and a speaker that, weirdly, was slightly better than the later IBM PC speaker.

But I didn't play a LOT of games on that (though I practiced programming, and discovered I hate saving files to cassette), and my next PC (not that I used, but that we owned) was a Packard Bell 286 12Mhz (10Mhz without Turbo) [for context, it was 0.012 Ghz] with both 5-1/4" and 3-1/2" drives, 1MB of RAM (which I eventually saved up $200 to upgrade to 3MB), and 256-color VGA graphics and PC speaker (eventually upgraded to a ThunderBoard [Soundblaster clone] card.)

The hard drive was a massive 40MB! So you could install a TON of games at once onto it. Like, almost 28 HD floppies worth (minus however much space DOS 5.0 took up. Which I think was maaaybe 3MB at most, but don't quote me on that.)

Krud said:
*leans back in rocking chair and describes two decades of computers*
Click to expand...

You've given me flashbacks to the demo cassettes you got on the cover of pc magazines and waiting twenty minutes for my brother to load two levels of Lemmings from a tape.
Reactions: Krud
You must log in or register to reply here.
Share:
Facebook Twitter Reddit Tumblr WhatsApp Email Link