Question Weekend question: Which videogame outfit would you wear in real life?

This week's question is: Which videogame outfit would you wear in real life?

Do you think you could pull off Adam Jensen's trenchcoat? Dream of dressing like Jihl Nabaat from Final Fantasy 13? Are you tempted to scrounge one of those versions of V's jacket from Cyberpunk 2077 even though they seem kind of cheap? Or maybe spend too much money on Leon's jacket from Resident Evil 4? Perhaps this should just be a question about jackets.

If you've got a good image to supply that would help, especially if you want to steal a lewk from some Persona 4 character I don't know.
Reactions: ForForPlay, MMachado, Bezum and 2 others
J

Lara Croft classic, best active wear ever! Sadly it's a pandemic I think the space suits from Noman's sky are a better option. But those are not jackets so in that regard I would have to say Indiana Jones's Bomber jacket. Can't go wrong when you accessorize with a whip.
Reactions: Krud, mad estrela, Bezum and 2 others

With the big game coming? Time to put on some red & gold!! 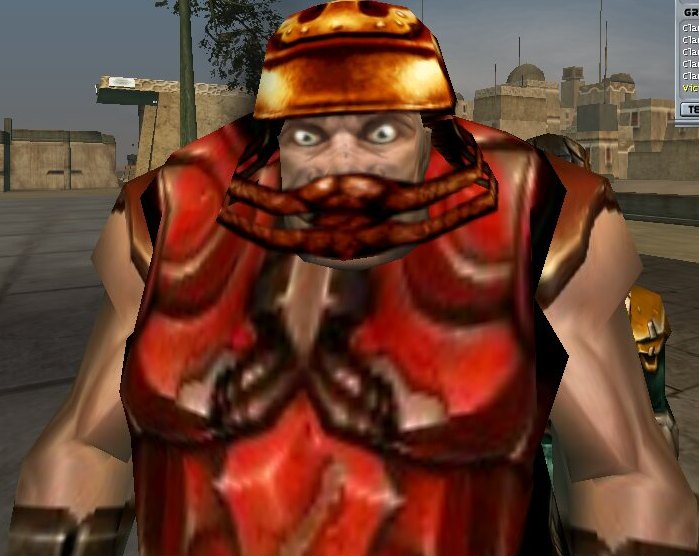 (from Anarchy Online)
Reactions: Frindis, mad estrela, Bezum and 2 others

I can see myself totally pulling off the Pagan Min style, courtesy of my friend Mr Chiffon!

PCG Jody said:
Do you think you could pull off Adam Jensen's trenchcoat?
Click to expand...

I could try—it's a great coat—but I expected I'd get an augmented uppercut for my troubles
Reactions: SaimonSan

PCG Jody said:
Do you think you could pull off Adam Jensen's trenchcoat?
Click to expand...

I still think of it as JC Denton's trenchoat.

Anyway, a few of Geralt's Witcher 3 outfits were cool, but you really need the physique to pull it off, and I do not.

My wife and I once made a cosplay for the Shrouded Armor from the Dark Brotherhood in Skyrim. It consisted largely of random black clothing and bright red tape.

We definitely had the worst costume of anyone at the event we attended, but it was a lot of fun.

As for something to wear during regular life, I think some of the clothes in Kingdom Come: Deliverance would work well.
J

well it won't be an outfit, but i will be buying the Mass effect Legendary cashe the helm looks pretty solid. I bought the andromeda Collector Nomad and that was very high quality, i expect this one to be the same. I've been pretty impressed with the collectors stuff "box" stuff that has been released as of late. Boxes are a thing of the past for the most part, but it seams like they do put some thought and quality into the ones that do make it. The stardew valley one is pretty good too.

I say this because i think next year i'll be trying to make some armor to go along with it! I'm pretty excited as the helm will actually fit, which i was surprised. So that will be cool.

That said i stand by my first post.
Reactions: Pifanjr
F