Weekend question: What's the worst internet connection you've had? And how did it affect your gaming?

This week's question is: What's the worst internet connection you've had? And how did it affect your gaming?

Have you ever had internet that stops working every time it rains? That slows down if you put your foot too close to the router? That takes four hours to finish loading an Evangelion AMV? Maybe you've never had it quite that bad, but most of us have put up with rubbish internet connections at some point, whether thanks to that one service provider who turned out to be useless, or that one house in a weird internet dead zone.

Did you get used to installing games the night before you wanted to play them? Did you endure the lag for the sake of your favorite online games, or give up on them altogether? How did it affect the games you played?

Being in Australia it'd be harder to name the best internet connection I've ever had, but I'd rather have a whinge about dial-up internet.

Sure, it was slow, tied up the phone line, and required you to sit through the sound of a thousand demons receiving recreational tabasco enemas before you could go online, but on the other hand it was also expensive.

However I did like doing a direct dial connection to a friends computer so we could play Street Fighter II on ZSnes, that was fun. Less fun was trying to look at naked ladies, at approximately eight minutes per still image I wouldn't have had the patience if not for the iron grip of puberty.
Reactions: Sarafan, Frindis, Kaamos_Llama and 2 others

i started on dial up, so its hard to beat a connection that only lasts 4 hours before you need to reconnect again

As I am also in Australia, much of what I have to say is above already

this is worst I had in last 10 years 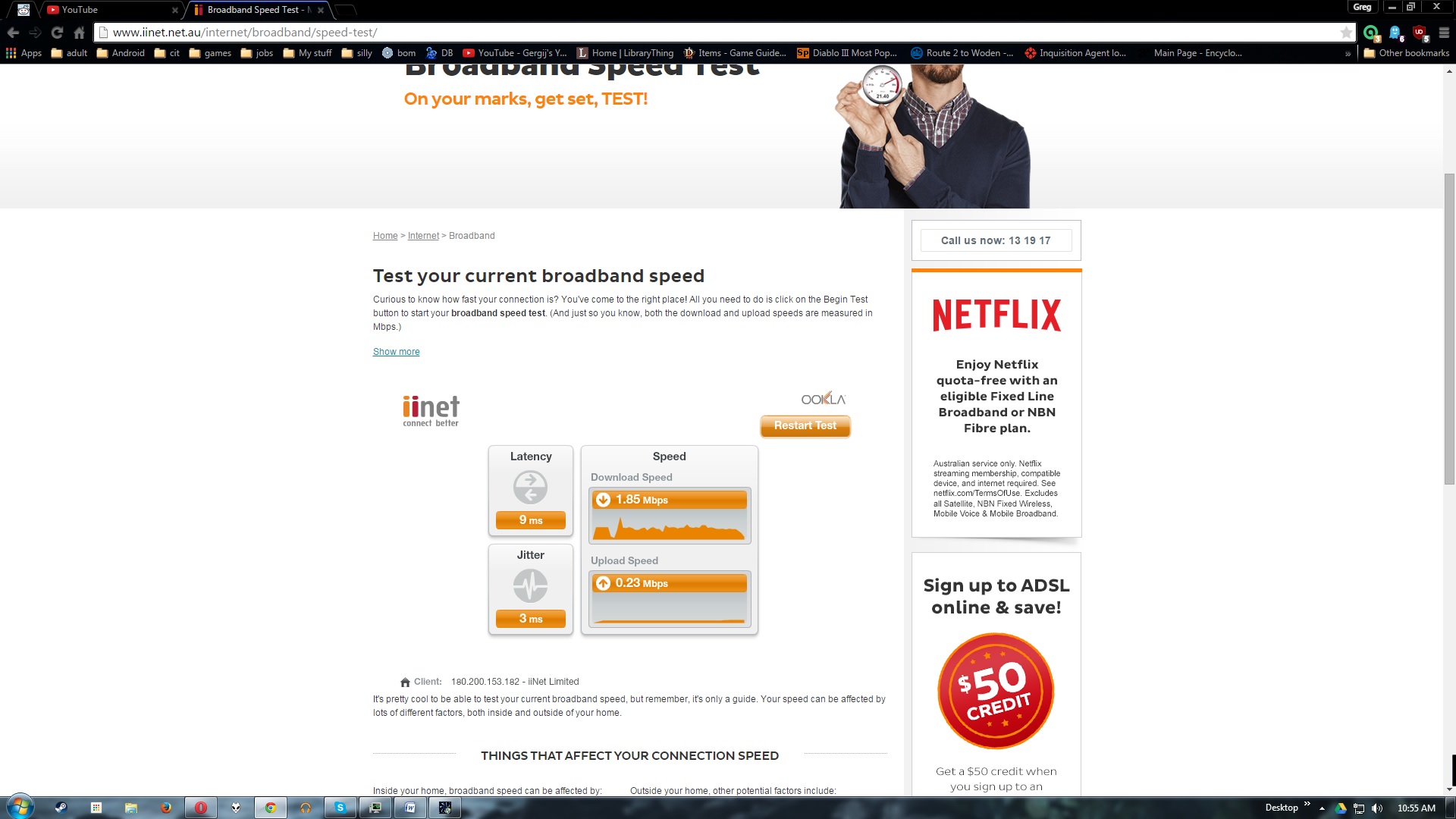 It used to take 4 days to download games, I kept all of Fallout 3 on my PS3, not cause I wanted to play it but downloading it again would take too long

Now, I can tell you best I have had. its what I have now 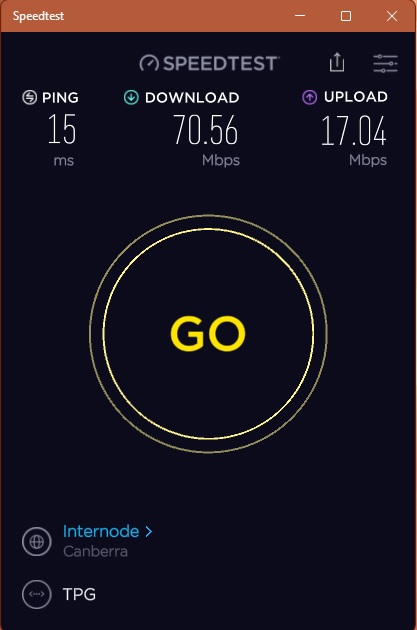 And all I did to go from 1.87mbps to 70 was change the plan I had with my ISP. Never looked backwards.
Not on NBN so there is that

same game that took 4 days to download before takes about an hour now.

playing experience? buy game and wait a while as it downloads, I can remember a few times on PS3 it would take so long to download I wouldn't feel like playing it by time I got it.
Lagging across entire zones in wow was nothing new. lagging out just as combat starts and unfreezing to find self dead, been there. You didn't know any better so would just keep trying.
I never knew how slow I was until I did the test on iinet website. I also had no idea what choices I had.
Last edited: Nov 10, 2021
Reactions: Sarafan, Frindis, Mazer and 3 others

hi hello guys. I'm from Indonesia. if I'm playing games at home and the network is not good. then I'll go out looking for a better network even if it's late at night. and continue playing the game ... greetings gamerszz..
Reactions: Zloth

Worst ever would have to be back in the days of dialup connections when I first got into PCs & gaming, using AOL. It was completely unreliable. I might be connected for a few hours, or it could just randomly drop the connection at any given time.

Since then it's been Time Warner Cable, which became Spectrum, and while download/upload speeds are reasonable and fairly steady, the customer service is a farce and the monthly costs ($84.99) have been rising to absurd levels.
Reactions: Pifanjr and Sarafan

My Comcast/Xfinity went out a few months ago, and it was an ongoing problem, so while I was waiting for AT&T to come and install fiber, I had a hotspot activated on my Verizon phone. Unfortunately, there was a data cap on that, and it went by fast. After you had hit the data cap, the hotspot went to 'emergency use', which was 3 KB. That was unusable for anything gaming related, so all online gaming came to a stop (except for the rare occasion when Xfinity was working).

Two days before ATT came out to put in the fiber, Comcast got their crap together and fixed the problem, but I'm really happy to be done with them. They are a nightmare in many different ways. Plus, I have faster Internet now with no data cap and pay $100 less a month. It was pretty dumb that I was still with them in the first place.
Reactions: Pifanjr, Sarafan and Frindis

Mazer said:
However I did like doing a direct dial connection to a friends computer so we could play Street Fighter II on ZSnes, that was fun. Less fun was trying to look at naked ladies, at approximately eight minutes per still image I wouldn't have had the patience if not for the iron grip of puberty.
Click to expand...

You sir, just won the internet with that comment! I wholeheartedly can say I know excaaaaactly what you mean
Reactions: Pifanjr

While it technically wasn't my "worst internet connection" (since that would have been 2400 baud back in the early 90's), I was stuck on 56k dialup for WAY too long, because we were living in a DSL dead zone, though we could move two miles in any direction* and get DSL, and cable internet was too rich for our blood at the time.

So while everyone else was enjoying broadband and digital downloads, I was swearing under my breath every time I bought a physical disc that had to be updated online. The worst was in 2008, when I bought Portal (yep, still on dial-up then), and found out I had to download almost 2 GIGABYTES from Steam before it would let me play, even though it was single-player and shouldn't have had to be updated. I eventually borrowed someone else's internet to get the files, rather than tie up our phoneline for two or three days straight. (We still talked on a landline back then, too.)

So yeah, I was very much anti "digital download only" games for a while. Then in 2009 we finally got a good deal on high-speed cable internet, and my tune quickly changed. But up to that point, I took it kinda personally even when a game wanted an internet connection or a big patch. (Actually, I still get annoyed when a single-player game insists that I be online I or that I update, just on principle. It's why I keep Steam in Offline Mode whenever possible. Though it seems to still connect and update Steam, which is cheating if you ask me.) Now git offa mah lawn!
Reactions: Pifanjr, Sarafan and Frindis

@Krud roughly the same time I got my hands on really fast internet. At campus, we would have 100 Mbps with a 10GB download restriction each day. If you exceeded the limit, the penalty would range from 1 day without a net, to being banned. Of course, we avoided this by using a hub. Those were the succulent days of downloading a lot of stuff you never knew you did not need and benching together watching every (legally paid for movies) in the whole wide world
Reactions: Pifanjr and Krud

I'm another with memories of dial-up.

It would really annoy my best mate's parents if we took up the phone line to play Doom (luckily for me, my Dad had a fax line so I was a lot less likely to get caught) so we could only play until we were found out.

Cs 1.6 on 128k broadband seemed like a dream in comparison.
Reactions: Sarafan

Well, GEnie doesn't really count as 'the internet,' so I suppose the worst I had was dialing up to the university with some VT100 emulation software. It didn't really hurt my gaming much. Empire, Hack, Zork, and DND really don't need much bandwidth and can recover nicely if SOMEBODY picks up the phone.
Reactions: Pifanjr and Sarafan

At home my first internet connection had a download speed of 256 kbit/s. Never had the occasion to use modem, so I avoided the most painful times when it comes to connecting to the internet. Before that I had the occasion to use a similar connection at my cousin's house. I rarely played online back then however. I was more of a LAN guy, but remember that there were always problems with the connection when a lightning storm appeared. Basically a break was guaranteed when this happened. Somehow the infrastructure of my former internet provider was very sensitive and as a result the whole neighborhood was without the internet after the storm. Sometimes when we were out of luck LAN adapters in some computers got fried as well. So basically no online gaming during or after the storm...
Reactions: Pifanjr, Brian Boru and Alm

For a few years I had to rely on mobile broadband for college work, hopping between brands such as Three and T-Mobile (in the UK they merged with Orange and came to be known as EE). The speed, as you'd expect for something that's really for a last resort, is not exactly suitable for sawing up Locusts in Gears of War multiplayer on the Xbox 360. "Dongle John" was my nickname, "up the Johngle" was my battlecry, low was my K/D ratio.

Still, it was a fun time. It eventually got too expensive. One moment sticks out at me: Destiny on day one requiring a seven gigabyte download. A voucher for exactly that much data cost £25. You can imagine why I was so against rising game prices and advocated for used games. Now I'm paying £16.99 per month for my broadband. It's still not great but it's reliable. It paid for itself in the first month.
Reactions: Brian Boru
You must log in or register to reply here.
Share:
Facebook Twitter Reddit Tumblr WhatsApp Email Link