Weekend Question: What's the best secret you've ever found in a game?

This week the question is: What's the best secret you've ever found in a game?

Maybe you found all those secret stars in Braid, or saved Shadow in FF6, or searched Wesker's desk 48 times in RE2, or earned the Golden Pantaloons in Baldur's Gate. If you found any of the secret rooms from this article back in the day, you rule.

It still counts if you used a guide!
Reactions: Sarafan and Frindis

I had a few candidates for the best secret (Fallout 2 has some of the best!), but I decided to pick dead Gargamel from Arcanum. In one of the locations you encounter a dead man and a cat surrounded with mushrooms. This is a reference to The Smurfs. The little blue creatures finally took revenge on Gargamel and his cat!
Reactions: Krud and Pifanjr

I think the best one I've found is the immortal villager in Black & White on island 3. I wrote about it on an earlier question here: https://forums.pcgamer.com/threads/weekend-question-have-you-defeated-a-boss-by-exploiting-a-bug-or-a-cheesy-strat.4620/post-46441

Black & White had a bunch of little secrets that rewarded exploration, like the dice in one of the daycares or the sheep creature if you complete the 'missing sheep' quest and keep bringing more sheep that are hidden around the island to the farmer.
Reactions: Krud

Duke Nukem 3D had some corkers. I enjoyed finding the dead Doom marine, for one. Even cheekier was the the 'really ready room' secret in the captain's ready room. No clue what levels these were on, but Duke had a pithy comment lined up for each when you discovered them.

Dangit, I used to know a ton, and suddenly none of them are coming to me.

Not sure if this counts as a 'secret', but in the game "You Don't Know Jack: The Ride," one of the earliest times that it asked me for my name, I entered my actual name [which isn't Krud, but also wasn't a common one at the time, either, rarely seen on mugs or keychains and the like], and the host said "Thank you, Krud." (only my actual name.) And she then proceeded to talk about the rules, and I was just blown away.

And this was in 1998, when most games still weren't all full-fledged talkies, and voice synthesis technology was still lackluster. This was definitely a name they'd had the woman record despite maybe only a couple dozen or so players probably having the name, and I have no idea how many different names they recorded, but it must have been a lot. I never could get it to repeat the process, even uninstalling and reinstalling the game. (Granted, I didn't try a ton of times.)

There's so many, that when I try to focus on just one, my mind goes blank.
I liked how secrets worked in rebooted Shadow Warrior. You not only were able to found some extra stuff hidden behind fake walls or waterfalls, but also easter eggs like sprites from original game - like bathing anime girls (don't look at me like that!) or even fragments of levels, all in glorious 90's textures. It was really nicely done and gave me a feeling that the devs were big fans of the Shadow Warrior and they surely enjoyed making these little things.

I can answer that with a picture: 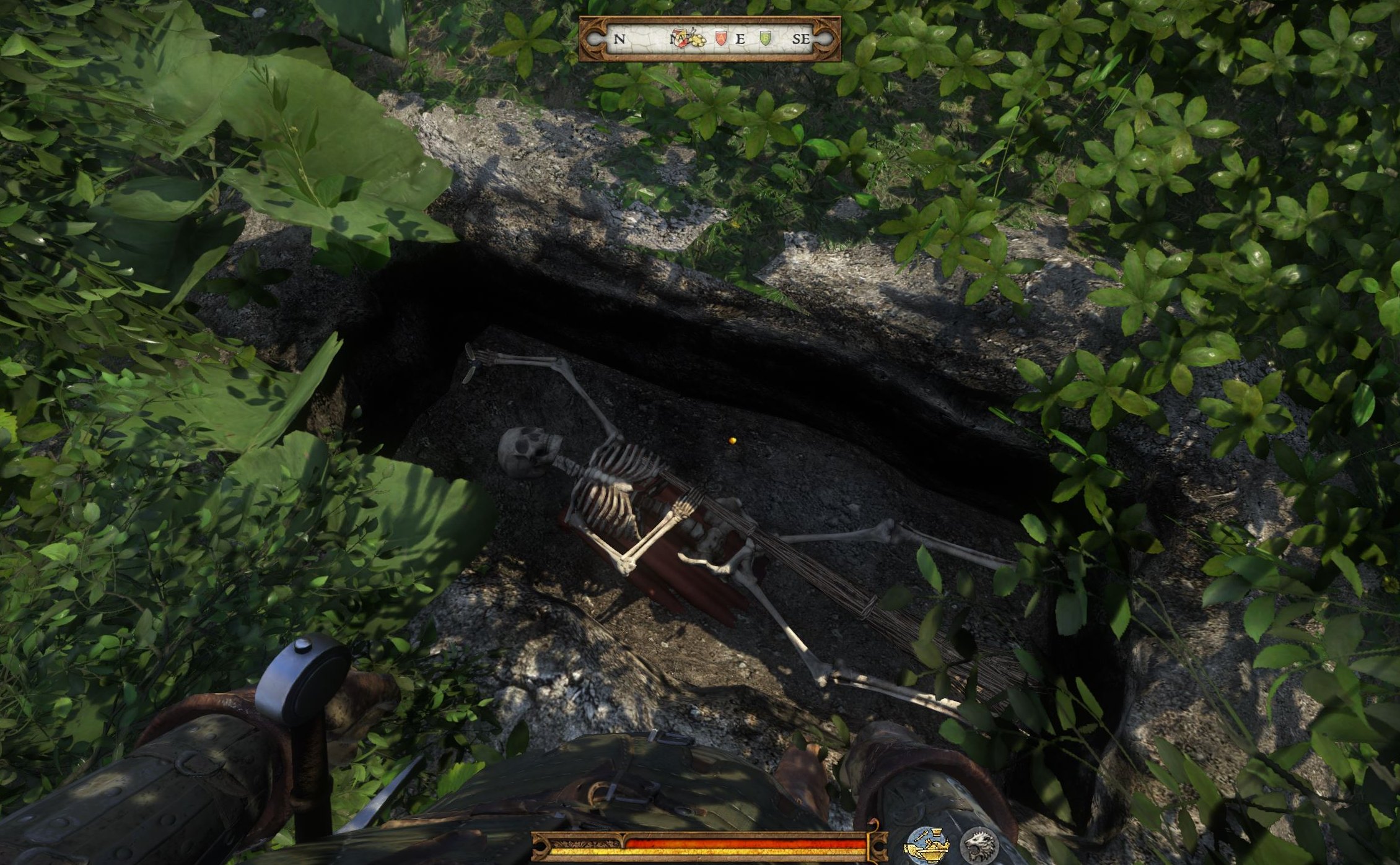 I had to get help to figure out what it was. (The gold dot in the center is part of the HUD, it isn't down in the hole.)
Reactions: OsaX Nymloth

Zloth said:
I can answer that with a picture:
I had to get help to figure out what it was. (The gold dot in the center is part of the HUD, it isn't down in the hole.)
Click to expand...

Ah yes, Kingdom Come: Deliverance had a few good ones! Like traffic cone hidden in one of those wooden towers used by hunters. Or a griffin nest with a horse armor inside.
Reactions: Zloth

As a youngster who considered Monty Python and Fallout some of the most subversive pieces of media in my libraries it was a thrill to run across the power-armoured knights of the round table in search of the holy hand grenade, and to answer the bridge keepers trivia questions regarding the airspeed velocity of swallows under various loads.

The various unlockable marvel characters in the Tony Hawk series were a treat too, and Skate 3 (or Skat3 if you're a marketing exec) even had Isaac Clarke from Dead Space as a skater thanks to EA being on a major cross promotional trip at the time.

Biggly said:
Duke Nukem 3D had some corkers. I enjoyed finding the dead Doom marine, for one. Even cheekier was the the 'really ready room' secret in the captain's ready room. No clue what levels these were on, but Duke had a pithy comment lined up for each when you discovered them.
Click to expand...

"Damn, that's one DOOMED space marine!" I forgot about those, so great haha
Reactions: Biggly and Zloth

For me it's Dungeon Siege, finding the lost pyramids in the desert. The desert portion of the Utraean Peninsula map was vast and there wasn't a map because it was the multiplayer portion of the game. Finding the damn things was like finding a needle in a hay stack. What an adventure, though!
Reactions: Zloth
B

How come I missed this topic months ago?

I remember pushing every wall in Wolfenstein 3D untill I found all the secrets. There was one gigantic pushwall-sequence where, near the end, you had to call a certain number. It was Apogee's number in the UK, don't know what the (first?) caller recieved as a gift. Or if there was a gift (?)

If I have to pick one game, with the absolute best (hidden) secrets then I take the Jedi Knight games. Dark Forces 2 and Jedi Outcast. Oh boy, some were really really hard to find.

The coolest secrets were those that led to secrets levels. Like the one in Blood, Doom,...

-That's one 'doomed' spacemarine-Duke Nukem 3D
-The Packmanlevel in Wolfenstein 3D
-Ant missions in C&C/Mortal Kombat 2 'Smoke...(although a different kind of 'secret': you most probably couldn't unlock those without some internet help)
Reactions: Pifanjr and Zloth
You must log in or register to reply here.
Share:
Facebook Twitter Reddit Tumblr WhatsApp Email Link