[Spoilers] Completed Cyberpunk 2077 after 124 hours - An experience/review from a casual PC gamer on an entry level gaming laptop.

#Spoiler Alert: This review/experience contains spoilers. If you haven't finished Cyberpunk 2077 yet, I suggest you not to read further. 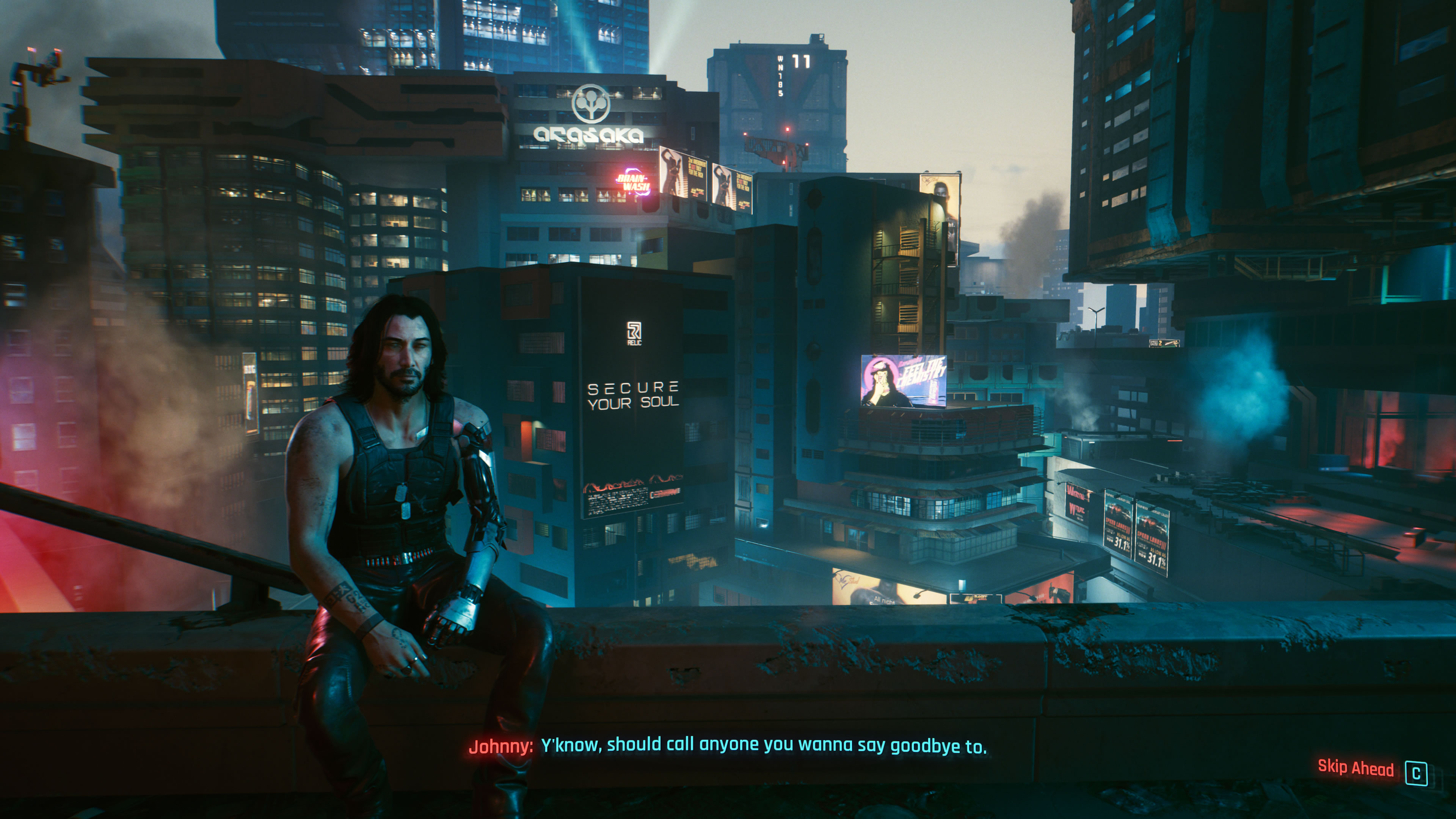 So 124 hours of Cyberpunk 2077 and I finished the main story line in all ending paths except the secret one. Also played the sub endings of each path.

Regarding secondary tasks, there were no side quests pending, but I left some gigs and ncpd hustles from 2 districts because I want something new for my second play through. I will be taking a break and will only play again after the February patch is live. I have never played so much of a single game in such a short time. Even Witcher 3, my favorite game I took a lot more time to play these many hours.

First about bugs and issues I faced: I faced a few serious bugs and several minor issues. I will try to list as much as I remember.

Now some of the minor issues I faced:
And a few more. But most of these are negligible and never mattered in enjoying the game.

Gameplay: I loved the gameplay. How differently we can play every time you play same mission is astonishing for me. I have used all kinds of strategy during my gigs / quests. Stealth, sniper, assault, melee, hacking. Each one is really good. My favorite method was hacking+sniping, but enjoyed other modes equally well.

Crafting seems like needing a bit more work, but do just fine. I have crafted a few legendary weapons.

Vehicles – Overall I liked vehicles in the game, but driving is not the best. It’s good, but could be better. First person driving was nightmare for me, so I always drive on third person.

Side jobs: I loved the side quests and activities in Cyberpunk. For me the quality of side quests and gigs made this game more enjoyable. Cyber psycho hunts were really cool. Races were good. Some of my favorite single side quests / gigs include:

Panam’s quest line is the best side quest line in the game for me. It felt like a mini – main story line for me.

Johnny Silverhand – He kind of grows on you. At first, he seemed like an arrogant character. But then how he developed his relationship with V was great. By the ending he became one of the best character in the game.

Judy – Romantic interest of my female V. Very sweet and interesting character and so beautiful. Her face should be one of the most beautiful faces in the game.

Panam – Awesome character. Felt like a really good friend. More side quests from her would have been great. Will definitely romance her on my male ‘V’ play through.

River – Good character, but way less content when compared with Judy or Panam. He deserved more. If more of River was there in side quests and main quests, would have considered for a romantic relationship with my female V. Right now just a good friend.

Jacky – Great character with a little less content. The friendship between Jacky and V is awesome, but if that montage was replaced by gameplay on how their relation grow along with how V grow as a character in night city, it would have been amazing.

Claire - She felt like a small, irrelevant afterlife bartender at start. But once you finish her side quest, you realize how strong, beautiful character she is. Should have given some more quests for her.

Main Story : Too bad it’s too short, but happy it’s very well written. May not be as good as Witcher 3 or it’s expansions, but still a really enjoyable story.

Endings: I liked the endings overall. Haven’t played the secret ending yet, but here is how I rank the endings I played so far from best to worst.

So that’s my experience/review for Cyberpunk 2077 on PC. This is the first time I am writing a game review. So please pardon the mistakes. I will correct any mistakes as I notice.

I understand that the game was filled issues for a lot of people. But for me, the issues were minimal enough to play for so many hours. My settings were low-medium. So that may have helped.

My rating for the game is still 8/10. 2 points deducted for bugs. Full marks for everything else.

Please share your thoughts on the game, points I shared and anything else related to the game.

I also loved the game. I'd rate it somewhere around 90/100. The day one patch fixed a lot of things, so I presume the reviews would be better if the reviewers received the patched version of the game. Yes, there are still glitches and bugs, but the game is so great that it's worth such a high rating despite them. It'll really shine when it's fully patched. I can't wait to experience the DLCs.
Reactions: nikku23 and JSimenhoff

Well done nikku , with the amount of problems reported on here and on steam forums i am suprised you even managed to use it !
Reactions: nikku23

The errors seem kinda funky. Some people are running into them a heck of a lot more of them than others. The consoles are getting outright creamed! Maybe something to do with the AI and physics getting starved for CPU? <shrug>
Reactions: nikku23 and Sarafan
N

Brian Boru said:
Nice review Nikhil, appreciate the effort
I'm curious re what are your CPU & GPU. I won't be getting the game anytime soon, but am wondering if it would be playable on my i7-7700 & GTX1060, or my other i5 & GTX970—both desktops.
Click to expand...

Thank you.. I have an i7 10th gen laptop with gtx 1650 and 16gb ram.. It's slightly lower than the recommended specs. But if you adjust the settings, the game is definitely playable although wont get 60 fps... i might have got 40-45fps which was good enough for me. In fact I never checked fps, the game was smooth and good looking for me. I think on a desktop you may get even better experience.


mjs warlord said:
Well done nikku , with the amount of problems reported on here and on steam forums i am suprised you even managed to use it !
Click to expand...

Thanks. On my laptop, game wasn't anywhere nearly as unplayable as a lot of guys over internet mentioned. I definitely got some bugs including some serious ones, but nothing bad enough making it unplayable. For the more serious ones I was able to find quick workarounds. Also patches may have fixed a lot. I can't say for consoles though.
Last edited: Dec 29, 2020
Reactions: Brian Boru
You must log in or register to reply here.
Share:
Facebook Twitter Reddit Tumblr WhatsApp Email Link