Hi all, Uwe Wütherich, Creative Director from the ROCKFISH Games team here with some details on the story we’re developing for our upcoming open-world space shooter, EVERSPACE 2.


Fair warning, there are a few spoilers in this piece for the
original EVERSPACE and some of the early EVERSPACE 2 content.​
In EVERSPACE, you play as one of the clones of Adam Roslin, a scientist and member of the Colonial Fleet who was drawn into a plot using illegal clone technology to restart an interstellar war. The previous conflict against the Okkar, an advanced alien race, over a sector incredibly rich in precious resources but also sacred to the Okkar, ended in a truce. Colonials are now allowed to mine under strict policing by Okkar military forces.

A conspiracy of Colonial Fleet leaders is formed to re-activate a clone program which would create cloned Okkar pilots tasked with breaking the peace treaty in the demilitarized zone (DMZ) and justify a war against the Okkar. After refusing to collaborate with the conspirators, Adam is injected with a cytotoxin to force him to carry on with their insidious plan. However, instead of giving in, Adam manages to escape to an abandoned base deep in the DMZ, the final sector of the original EVERSPACE.

Unfortunately, the clone facility at the base has been destroyed after the war, so even with all his knowledge about human bio-genetics, Adam cannot reverse or cure the cytotoxin’s effect on his body. He comes up with a mind-boggling yet desperate plan: to transfer himself into a fresh body. He scans Cluster 34 for derelict clone carriers from the war, remotely re-activates their cloning facilities, uploads his own DNA sequence, and feeds the onboard AI of every space fighter present on the carriers. These clones are given the destination coordinates of his secret lab as Adam puts himself into stasis to slow down the decay of his body. With a bit of luck, one of his clones would show up as a replacement before the lethal toxin finished its work.

Human cloning and all the ethical questions that come along with this story concept are not new to sci-fi pop culture. We’ve taken plenty of inspiration from iconic movies like Oblivion, The Island, The Sixth Day, and Moon. The concept of transferring the memory of one clone to the next after their demise not only fits the rogue-like formula perfectly, it also enabled us to tell a mind-bending story that progresses with each sector as you get closer to your destination.

As you advance deeper into the Beltegrades, the name of the game world in EVERSPACE, you gradually regain memories of your original self as you uncover the plot the original Adam was involved in. Just before the final encounter, you learn that there are other clones like you that are scattered across the Beltegrades, and they all have the exact same goal as you...

Want to know more? Pick up a copy of EVERSPACE or read a handy wiki summary here. Or watch this video from our Community Ambassador Erik Schrader, featuring all cutscenes of the first installment of the series.

The Story in EVERSPACE 2 (spoiler alert)
Needless to say, players will be curious to learn what happened to all of the escaped clones from the original game. In EVERSPACE 2 the protagonist is again one of those remaining illegal military clones, who survived the deadly intrigue initiated by his clone father, Adam Roslin. 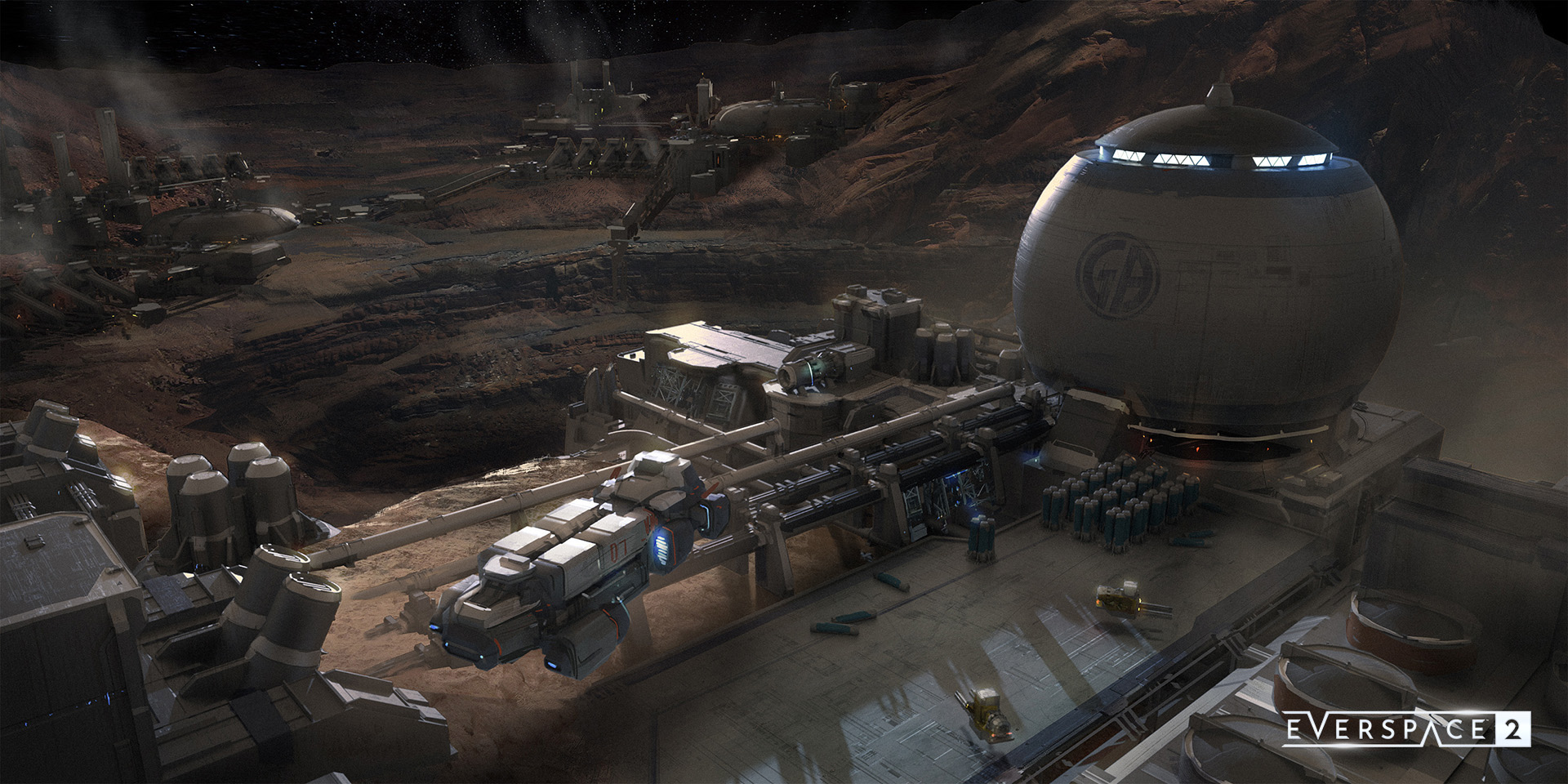 Still on the run, the player’s journey continues through the Beltegrades, now the open game world of EVERSPACE 2. We begin with the new Adam being part of a work crew for Grady & Brunt Prospects, the huge mining company in the DMZ we already know from the original EVERSPACE.

After being captured by Outlaws, Adam is introduced to his cell-mate Dax, a Colonial Fleet deserter with a mysterious past and a well-kept secret. During a sudden station attack, they manage to escape and also rescue Ben, Adam’s former colleague and only friend at G&B .

To get off the Colonial authorities’ radar, Dax and Adam flee to Dax's former hideout base to regroup and patch up Ben. As fresh partners in crime, the two men have to start trusting each other if they want to stand a chance to survive while facing bounties on their heads from several parties. In his role as a deserted Colonial space pilot who had to play every trick in the book to survive against all odds, Dax will be your first companion and serve as a guide in this early portion of the game. 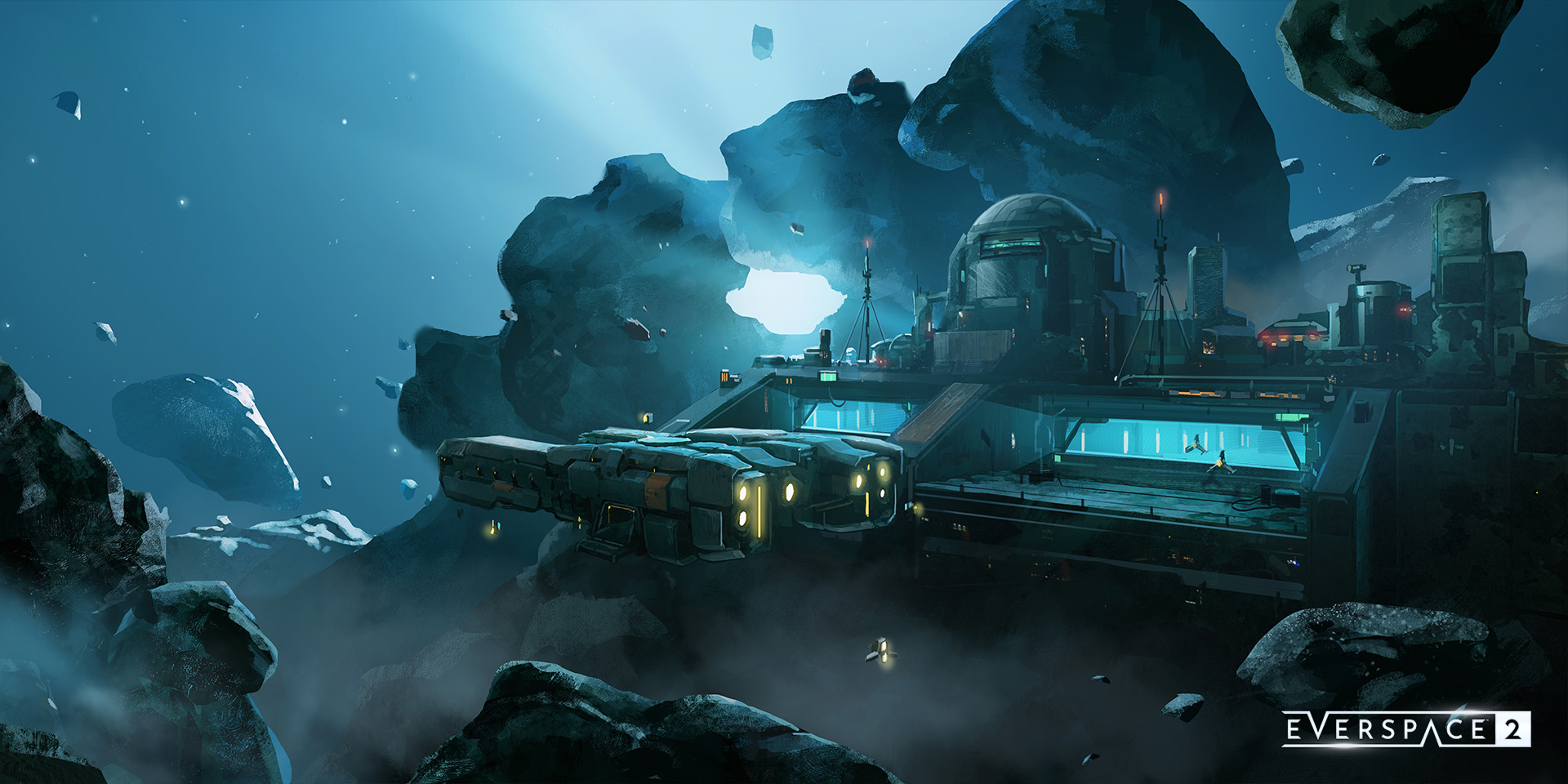 Together with his companions, Adam will navigate vast space and warring factions to ensure the future of their new home base. Meanwhile, he is pursued by a Colonial Commissioner, hunting down the last remaining clones, and embroiled in an escalating feud between rivaling gangs and Grady & Brunt Prospects, his former employer. These skirmishes are observed by the Okkar, who are losing patience with the chaos on their borders. 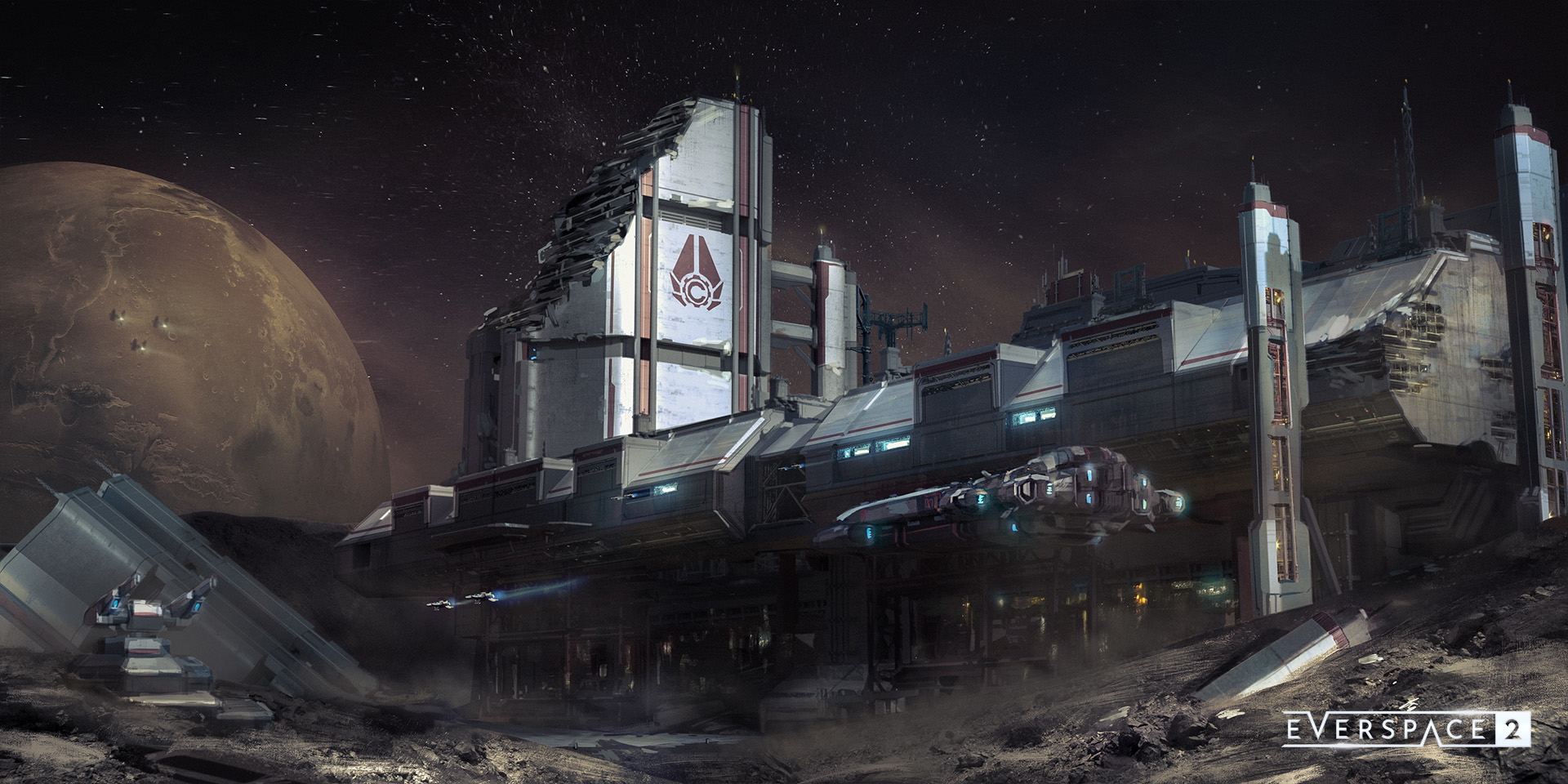 Adam, being a clone with a shattered memory, is on a quest for identity where his friends and companions shape who he will become. Along his journey, he experiences trust, love, and compassion but also greed, betrayal, and rejection and learns human values from the interactions with other species, offering deeper reflection on human behavior.

Those learnings are reflected with other companions, who act as relatable characters through such human emotions, but allow Adam to figure things out in his own way.

Companions in EVERSPACE 2
Next to your first companion Dax, your only friend, Ben Grendal, will become your second companion after you have managed to save his severely injured body with high-tech implants. As a skilled engineer himself, Ben’s perk tree will unlock special skills in mining, dismantling, repairs, and crafting (fun fact: we named this character after our community member Grendal, one of our die-hard fans even before the original EVERSPACE, as a token of appreciation for his great work on the EVERSPACE wiki). 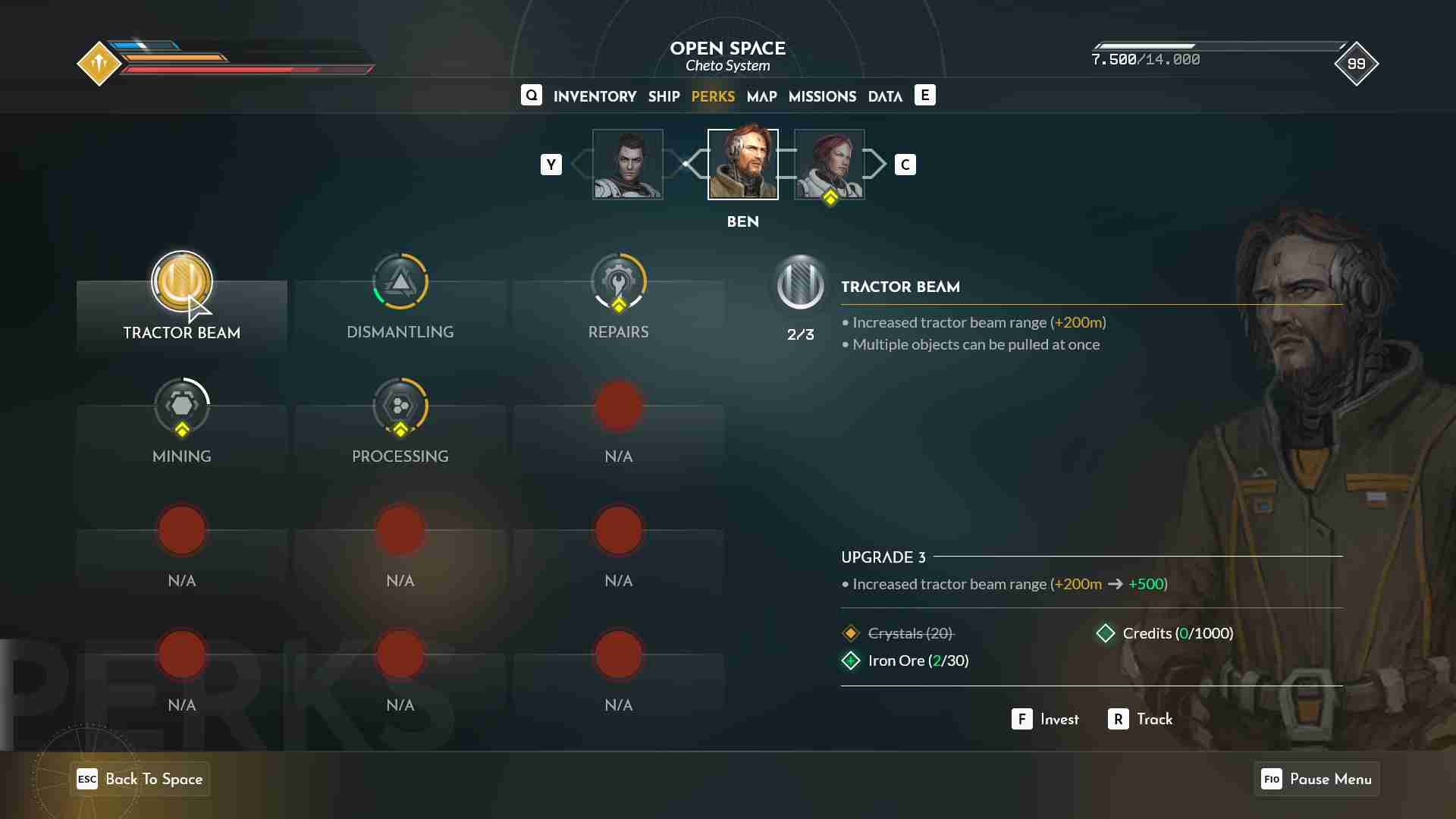 While Adam and Dax work on getting the base up and running, they bump into Dr. Delia Wendo who may be able to provide help to the injured Ben. Unfortunately, the clever scientist has her own agenda which only complicates the matter for Adam and Dax. Delia will eventually become your third companion with a powerful perk tree affecting Nanobots, Energy Orbs, and something else (mysterious!) that you can invest in. Basically, think of her being a doctor for the well-being of your spaceship. 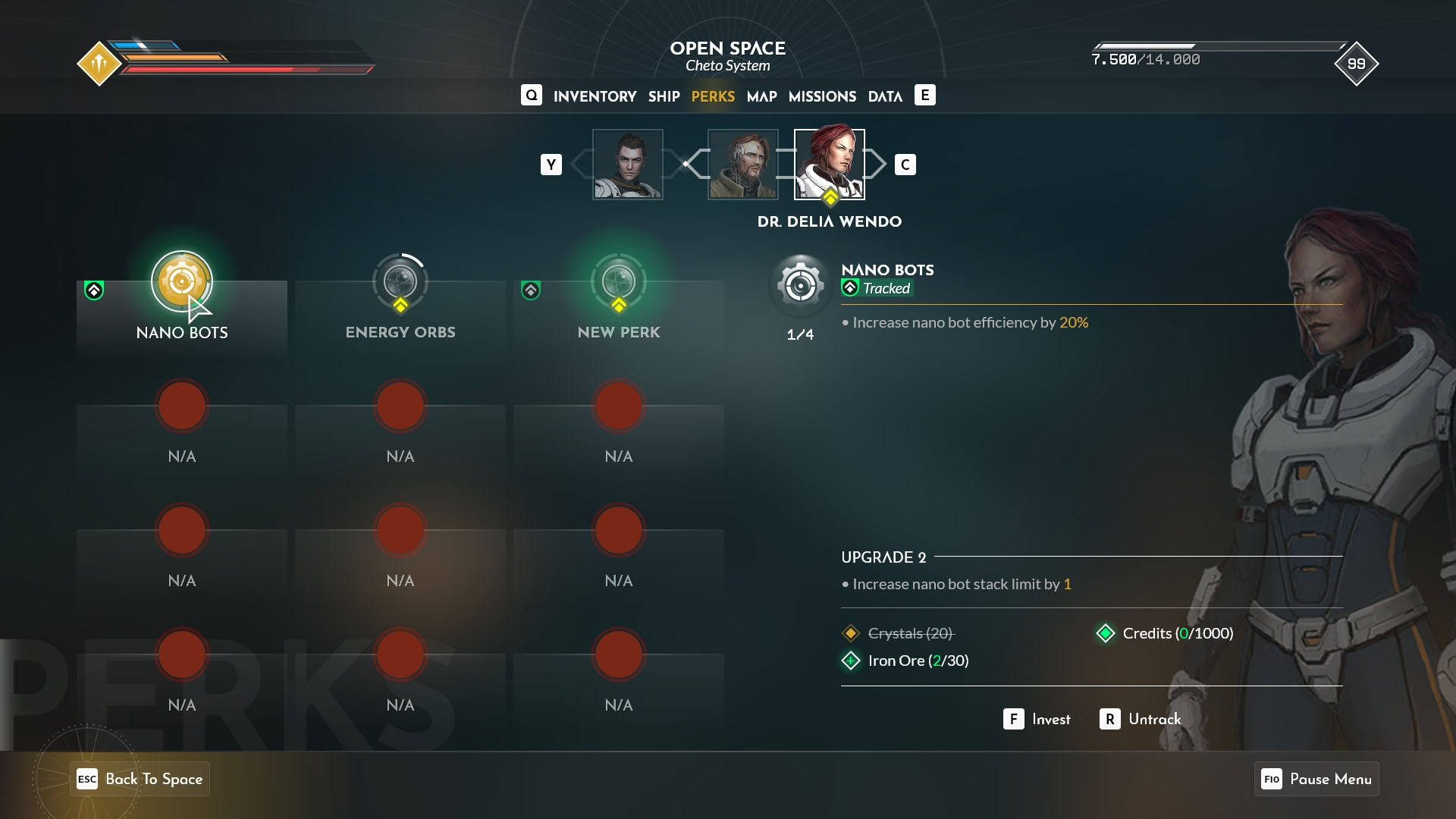 As already mentioned, companions are the hero’s main influence on his way of becoming a true human being. As an illegal clone with a false identity and on the run, he is trying to find a new life and to leave the DMZ for good. But besides their impact on the protagonist, the companions also illustrate and define the game world and lore significantly. Each will provide individual companion missions, leaving an imprint on the hero’s still half-grown morale and personality.

We’re not ready to share all remaining companions just yet, but here’s a little teaser of one more iconic character joining the party, who is also an old acquaintance from the Encounters expansion of the first installment.

Tareen - Outcast Okkar Trader and Quartermaster
In EVERSPACE, Tareen is an independent Okkar trader who operates in the Demilitarized Zone. Adam saves him from an Outlaw attack and is tasked by the merchant to fulfil a series of trading contracts. As an Okkar, a reptilian race with a long life-span native to the Beltegrades, Tareen, being born a servant, was supposed to become a cleric on the Okkar homeworlds, but chose exile in order to have the life he desired.

In EVERSPACE 2, Tareen has a similar story, being saved by Adam from a GB attack. Later he plays a major role in resolving the conflict between the Okkar clerics and a radicalized branch of the Okkar warrior caste, resulting in joining Adam’s crew. Tareen will be a fountain of useful information about the Okkar, sharing more about the culture’s religion, caste system, and relationship with the rest of the game world.

Just like all companions in EVERSPACE 2 who have an associated perk tree related to their character background, they can also provide certain mission benefits as an active companion. In Tareen’s case while out on missions, his heavy cargo freighter provides more inventory space and his influence reduces hostility during Okkar encounters.

In the original EVERSPACE, flashbacks provided insights into the past and motives of the clone’s progenitor, showing the hero a previous life he never had and memories that were not his own. We’re continuing to use flashbacks in EVERSPACE 2, but instead of showing the past, they’re used as a tool to show change within, as well as the building conflict between factions, companions, and someone very close to you.

Thanks for reading! We’ll be sharing more about the EVERSPACE 2 story and companions in future Kickstarter updates as we get closer to Early Access on Steam this December. Check out the demo and wishlist the game if you’re excited by what we’ve shared today!
Last edited: Aug 31, 2020
Reactions: adnanfx, RFG_Erik, youssef.z and 8 others
G

Nice, glad to see Tareen is coming back! Hope that means the rest of the Encounters crew will be making a reappearance as well?
Last edited: Aug 31, 2020
Reactions: RFG_Erik and HazzyDevil
H

Great read! Super intrigued to see how all this unfolds. I love how the Okkar have a caste system in particular!
Reactions: SWard, RFG_Erik and Grendal27
M

The story's very interesting. I'll be sure to give it a try

Grendal27 said:
Nice, glad to see Tareen is coming back! Hope that means the rest of the Encounters crew will be making a reappearance as well?
Click to expand...

I have not played Everspace, but now I'm going to have to check it out! The linked cv article focused on characters. Is there a better link for gameplay mechanics?

Techmom.me said:
I have not played Everspace, but now I'm going to have to check it out! The linked cv article focused on characters. Is there a better link for gameplay mechanics?
Click to expand...

You may want to check out our Kickstarter page. It provides a pretty solid overview, also regarding gameplay: https://www.kickstarter.com/projects/rockfishgames/everspace-2
Reactions: Techmom.me
T

RFG_Uwe said:
You may want to check out our Kickstarter page. It provides a pretty solid overview, also regarding gameplay: https://www.kickstarter.com/projects/rockfishgames/everspace-2
Click to expand...

Heading over now! Thank you so much.
L

Oh I can't wait! This is going to be GREAT!
T

RFG_Uwe said:
You may want to check out our Kickstarter page. It provides a pretty solid overview, also regarding gameplay: https://www.kickstarter.com/projects/rockfishgames/everspace-2
Click to expand...

Ok. I WANT ONE! As a former Navy pilot, I need to get this game. If it works as well as the content on Rockfish's website it will be like SWTOR once they added flight only better.