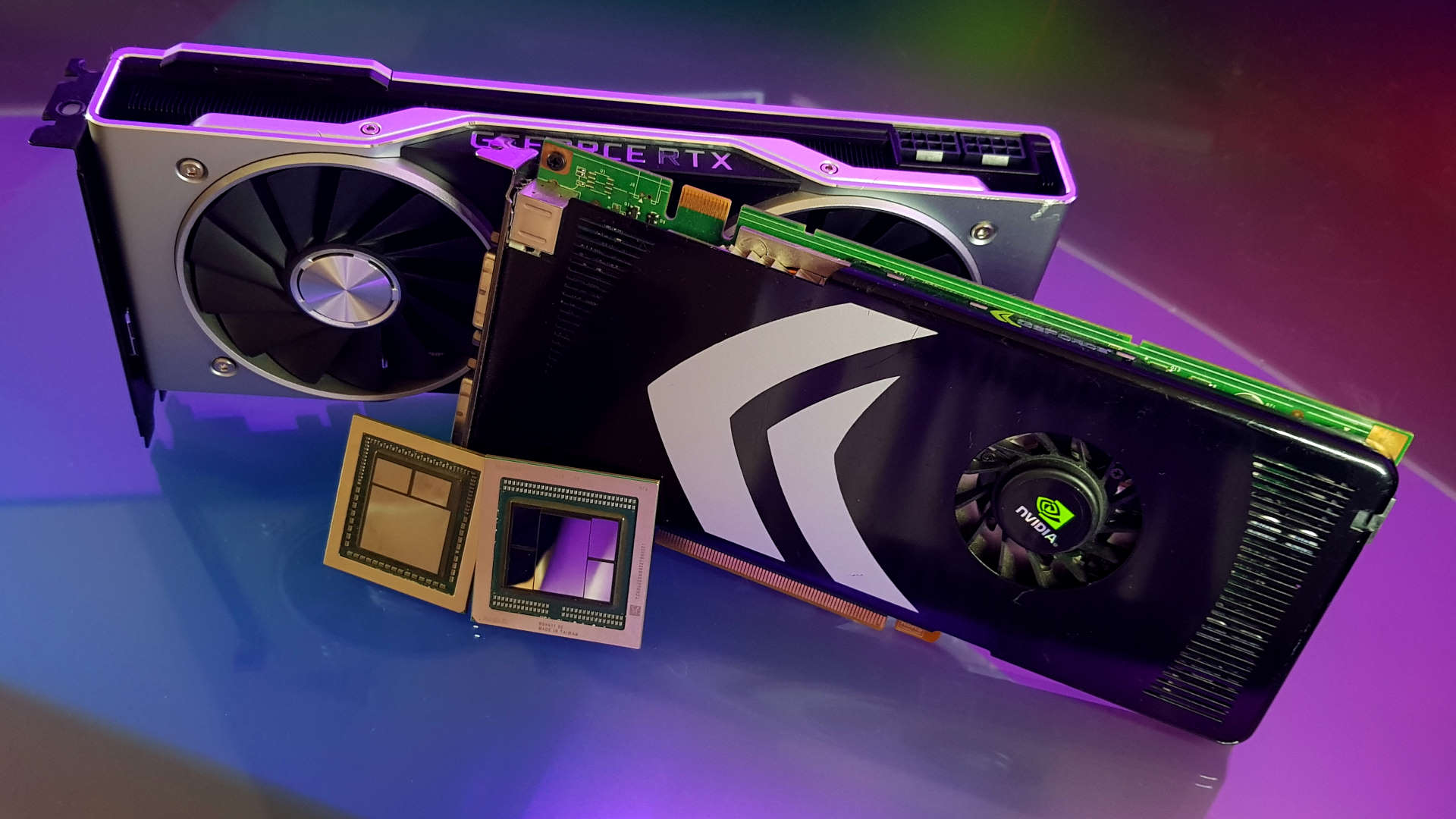 We want to know what PC gaming hardware you lovely people love. What is the gear that sparks joy in the heart of the PC Gamer community? We're not necessarily talking about the most powerful technology known to siliconkind, we're talking about the PC hardware that real people use.

We've been canvassing opinion across the PC Gamer forum and on social media, and have come up with a shortlist for each of our gaming gear categories. And now it's your turn to help us figure out which piece of tech is the top pick for you.

Each day we're going to be asking you to choose from the shortlist which product means the most to you, or which you think is deserving of the PC Gamer Reader Award.

Today we're looking at the graphics cards the most of our readers picked, and we want your votes!

Make your voice heard via the poll above.

My vote goes to the RTX 2070 Super. I own the 'normal' version of the card, which I bought 1,5 years ago. I use it for ultrawide 1080p gaming and so far this card has been able to power through every game I throw at it. Ultra settings at 50-60fps in even the most demanding of AAA games, if I so choose, or high settings at a smooth 75-90fps. It's also the cheapest GPU that can actually do ray-tracing (there's the RTX 2060 but I mean, come on) and it's allowed me to leverage the dark magic that is DLSS in games like Control and Wolfenstein, giving me better image quality AND better performance in both titles.

This card would be a great choice for 1440p gaming as well and if the next version of DLSS is as good as insiders claim it to be, this card's value proposition might actually increase even further with time. I paid about €500 for my model, which isn't exactly cheap, but considering the amount of features and the performance it's great value compared to models like the RTX 2080 or the Radeon 5700 XT. Nvidia also has much better driver support than AMD does, although the latter has been gaining ground.

I have no doubt that my RTX 2070 will be a fine card for a few years to come, and by the time it needs replacing I'll probably stick with Nvidia. They're not without fault, but I've been consistently impressed with their offerings over the past few GPU generations.

The RTX 2070 (Super) may be many things, but good value versus an RX 5700 XT is not one of them - unless all ones plays is Control and Wolfenstein YB, and one's personal subjective aesthetic judgement is that DLSS improves image fidelity. Also, for any card to actually "do" raytracing, it needs an outstanding implementation of DLSS (2.0) in the game, which means that a) only 2 games do it (those 2 games*) and b) a 2060 will do it too.

* Death Stranding has an excellent DLSS implementation apparently but no raytracing, at least for now

I'm not dissing the 2070 or 2070 Super, just suggesting that the very real enjoyment from the card might be colouring the conclusions

It was difficult to pick a winner in the category. Eventually picked the 1060 since it trades blows with the 580 but is older, was more available for more people during the mining boom, and as the 580 was a refresh of the 480 necessary to up its competitiveness vs the 1060.
Last edited: Jul 21, 2020
Reactions: Rensje

Oussebon said:
The RTX 2070 (Super) may be many things, but good value versus an RX 5700 XT is not one of them - unless all ones plays is Control and Wolfenstein YB, and one's personal subjective aesthetic judgement is that DLSS improves image fidelity. Also, for any card to actually "do" raytracing, it needs an outstanding implementation of DLSS (2.0) in the game, which means that a) only 2 games do it (those 2 games*) and b) a 2060 will do it too.

* Death Stranding has an excellent DLSS implementation apparently but no raytracing, at least for now

Having had another look at pricing between the two models, I must concede that the 5700 XT is probably better value. In my mind the difference in price wasn't quite so large, but currently the 5700 XT seems to be about €70 to €100 cheaper than the 2070 Super, at least here in the Netherlands. It's a little slower (most of the time, not always) but not by that much. So in the case of the 2070 Super you're paying a fairly big premium for a small amount of performance, some niche features and better driver support. I would say that's a fact rather than opinion, and it's an important one. It's mostly for the latter reason that I'd still have the RTX.

Also, on the topic of DLSS; it's not so much that it actually improves image quality, but that it allows you to play at higher (perceived) resolution while maintaining high a frame rate. This greatly improved my enjoyment of Control, for example. To my eye it didn't make the game look worse outside of some minor artifacting and it stands to reason that the next implementation of the tech will be another step up in fidelity. Death Stranding is a sign of things to come, hopefully.

In terms of ray-tracing, I've greatly enjoyed my time with the ray-traced graphics in Battlefield 5, Call of Duty: Modern Warfare and Minecraft RTX, among other titles, all on the base RTX 2070 without the added bonus of being able to leverage DLSS. All of them ran fine (60+ with minor dips), although I will say I couldn't fully lock Minecraft to 60 at my resolution, but it's still in beta so things might improve. Call of Duty in particular impressed me.

@Oussebon also I just wanted to say I'm consistently enjoying your vast knowledge on PC tech and your willingness to help others out and give advice, without any kind of pretense or arrogance. If anyone around here deserves that community contributor badge, it's you.
Last edited: Jul 22, 2020
Reactions: Frindis and Oussebon

Those differences are hard to justify, in my mind, especially with Ampere (and I suppose the new AMD cards with their raytracing hardware) on the horizon. If they have raytracing hardware beefed up proportionately more than the overall horsepower bump (e.g. 30% normal performance gain, 100% more RTX hardware or performance as periodically gets rumoured) it's hard to see where that will leave first-gen RTX products as future titles that raytrace more than the odd reflection or shadow (things that have an RTX impact more akin to Minecraft) start appearing. Which may not be that long if Nvidia and AMD and consoles all then support and push for raytracing. Not to mention whether AMD's approach to raytracing hardware impacts how games implement it.

Driver support also varies. For instance, Nvidia only relatively recently fixed an issue where running gsync on an SLI setup reduced or even really hurt performance. Two of their flagship' proprietary technologies essentially conflicting, and I think it took over 18 months to see that sorted. Nvidia also have been through patches of extremely ropey drivers, which I can attest to from personal experience. A lot of people with the RX 5000 series cards don't have issues, or briefly had issues which were fixed. That's not to condone problems with drivers, but rather to question whether - as someone who has owned in succession a GTS 8800, a GTX 670, GTX 670 SLI, GTX 970, GTX 970 SLI, and RTX 2060 - whether I really agree that Nvidia have better driver support. AMD get a lot more public flack for it, but Nvidia do release problem drivers, and do fail to fix problems for extended periods even when it affects technologies that are meant to differentiate them from the competition. Things like gysnc are why you bought Nvidia in the first place (well, not you personally ofc, but some people)

There's a strong degree of personal experience about it. If you didn't have an SLI + Gsync setup, you won't have felt that hit. If you have an RX 5700 XT and didn't get hit by the recent driver issues, again, you're fine. But, if you decided to give AMD a try after being mostly an Nvidia user and you got hit by issues caused by poor drivers... bad news for AMD and likely very publicly expressed bad news too!

As for RTX experience, it's a case of YMMV too I suppose. Some people may strongly prefer the higher framerates in titles like BF or COD and find they do not appreciate the raytraced effects enough to accept the framerate loss on their high refresh monitor, or what have you.