Need advice for my pc build! :)

Hey! I'm building my first gaming pc. I'm going for a pc on which i'll play mostly FPS games and open world games (idk if that's the correct term). I'll probably also use it for school, but it won't be anything special i suppose.

I went with a lot of corsair RGB components because i liked it lol and i'm willing to spend more on the looks of my pc, so i don't mind missing out on saving some money if that makes sense.

I'd like to hear your thoughts and maybe some improvements on my pc build. I know that for my first gaming pc it could be a bit much and i did post 2 other threats before this one where i had a much lower budget, but this time i went with something more expensive and focussing more on the aesthetic you could say i guess.

I'm not sure if this motherboard is the right choice, i picked it to be sure i had a good motherboard, but maybe it unnecessary and a B550 would be better. Please give me your thoughts on this.

Idk if this is the right place to ask, but i assume someone could help me with this. The monitor LG 27GL850, is it any good? Is it worth the money? Do you recommend it? Do you have any other options, preferably 2560x1440p 144hz and g-sync would be nice.

If i have any major bottlenecking or if something else is wrong please help me, i would love to hear your guys' thoughts on my pc build and if i can improve on anything!

I've had the LG 27GL850-B for a year now and I like it. Its been out a while though and many other monitors have been released in the meantime, but its still considered to be up there for gaming.

I wouldnt bother overclocking your memory unless that sounds like it would be fun to you, and you were willing to spend some time and effort. The performance difference isnt huge as long as you have a reasonably fast kit in the first place.

Okay thanks a lot @Kaamos_Llama ! I’ll go with the LG 27GL850-B then. Haven’t found another monitor i like yet and this one is fine right so why look for a different one.

Yeah i thought so, 3600MHz C18 is fine i guess, i won’t see that much of a difference with a lower latency and faster speed anyway. I’m fine with the performance i get with this kit i think, i could save some money by going with a slower kit, but i heard that 3600MHz is good with AMD Ryzen CPU’s.

As far as I understand it, the Infinity fabric that allows Ryzens CPU cores to communicate with each other inside the chip has a clock speed that works best when matched at a 1:2 ratio with the RAM used.

Using higher frequency RAM allows this to operate faster, but most Ryzen CPU's are not capable of over 1900Mhz Infinity fabric, and many can only do 1800. So 3600 Mhz RAM is about the sweet spot. I think I also mentioned in your other thread about dual rank RAM also being a small improvement, but you have that with a 4x8 kit so all good.

@Kaamos_Llama yeah that’s what i thought, so 3600MHz is the best option i guess. I went with 32GB like you recommended and 4 sticks,because i like the extra RGB lol.

You also said something about a bigger SSD but i don’t know why i would need more storage on my SSD since i’ll probably only use it for windows and some small documents yk, so 1TB is enough i think.

Winston :) said:
@Kaamos_Llama yeah that’s what i thought, so 3600MHz is the best option i guess. I went with 32GB like you recommended and 4 sticks,because i like the extra RGB lol.

You also said something about a bigger SSD but i don’t know why i would need more storage on my SSD since i’ll probably only use it for windows and some small documents yk, so 1TB is enough i think.
Click to expand...

You can get the same spec of 32 GB of Corsair RGB RAM for quite a bit less than the Dominator platinum you chose. Also bear in mind that sometimes 4 sticks of RAM can be harder to stabilize than 2. Even if you're using standard XMP/DOCP settings you might need to add a notch or two of voltage to your CPU's memory controller. Cross that bridge when you come to it, but now you where to start looking just in case.

I like to stick with RAM kits from the motherboard QVL list as I've had problems personally with that, but it seems most people get away with it.

I'd also have gone with a 5600X just for gaming, there's almost no current difference in the two chips for gaming. German stores at least have them for a slight price hike, I ordered one myself from Caseking if they arent around locally. Otherwise I guess the 5800X is more 'future proof' and it wont do any harm.

You already know how I feel about B550 vs X570
Reactions: Brian Boru

@Kaamos_Llama thanks again lol! I forgot i switched from 500GB to 1TB lol and it’s fine like this yeah.

Oh okay i’ll look into it, might’ve to go with just 2 sticks and maybe a different kit or motherboard which are more compatible ig right? or is that not what you meant?

The 5600x would be good enough but might as well just go with the 5800x it’s a bit more expensive but it’s not too overpriced for my budget yk.

Is the MSI MPG B550 gaming plus a recommendable motherboard? Or perhaps a MSI B550-A PRO?

Price to performance wise the 5800X is hardly any faster for games than an Intel 10700 while costing quite a lot more, thats why its not considered the best deal overall by most people. Save some money on that RAM and make the jump to 5900X, if you can find one for MSRP Alternatively you can drop down to 5600X, get the cheaper but equally asa fast Corsair RGB RAM and save almost 200, which is the MSRP difference between a 3070 and a 3080 if you can find one for MSRP of course.

4 sticks is probably fine, just sometimes it takes a bit of playing with to get it working. The QVL list (Qualified vendors list) is just a list of memory kits that manufacturers have actually tested as working on that exact motherboard. You'll find it on the manufacturers web page for the motherboard model you are looking at, like here. 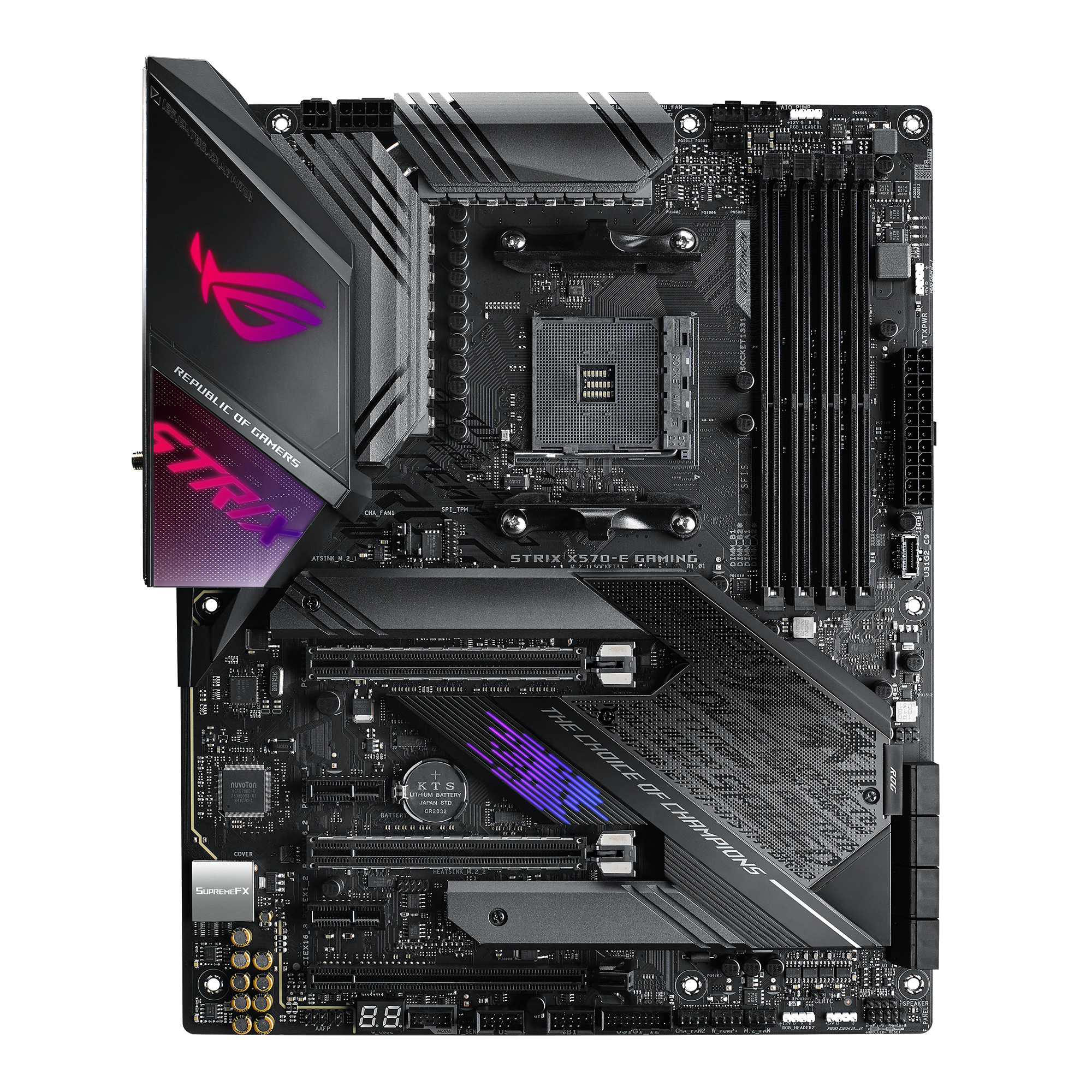 I ordered a Gigabyte Aorus B550 Pro for myself, but apparently the RGB isnt very exciting on it. I was also considering the Asus Strix B550-F, which has three RGB connectors vs the Strix X570-E you are looking at having four. I really dont know much about RGB to be honest its not a factor for me, so I cant inform you very well on it. Otherwise if you are planning on running 8 SATA hard drives instead of 6 then the Strix X570-E might be worth it for you. It also has gold audio connectors, and dual LAN.

The MSI B550 A Pro is a decent board for a budget build but it lacks a lot of features, and I haven't got the other MSI board you mentioned on my spreadsheet.

All of these boards among others, have power delivery capable of handling an overlocked 5950X, it's the most important thing for me if I come across a cheap one in the future
Last edited: Feb 21, 2021

I think i'll stick with the 3070 and might go with a better CPU. If i can find a good deal for a 5900x i think i'll just go with the 5900x and if not i could try to look for an Intel CPU, but idk yet. Cheaper RAM might be a wise decision too, the looks of the dominator are really nice but it's way more expensive lol.

Ah okay thanks, i'll look more into the QVL list!

Got it. I'll go with a motherboard which includes all the features i need and idk which features i need so i'll have to look more into that too. I definitely won't need all those SATA hard drives lol, at least not right now, who knows what i'll plan to do in the future. Since i wont be needing all those SATA ports i could go with a board with less SATA ports and more other features so that's nice ig yeah.

And thanks a lot for everything!

No problem, theres nothing wrong with the 5800X, its just priced a bit too high for what it gives compared to the competition.

SATA ports, I dont think your average gaming rig will even need more than 2, unless you have a lot of old drives you're hanging onto that you want to transfer from an old rig. For me its almost irrelevant.

Your list would include RGB control and software, I believe some manufacturers RGB control is better than others. Other important things to me for motherboard are:

-VRM (As long as its not a complete lemon its fine, but they are out there)
-Enough fan headers (5+)
-Audio (not the older 892 you might find on cheaper boards)
-Back panel USB's (Depends how many peripherals you want to use on top of KB+M)

In that order. You'll need to look at independent reviews for VRM analysis and performance, but the rest you can pretty much just read off the spec sheet. Hardware Unboxed on Youtube has some good B550 and X570 VRM comparison videos with easy to read charts to compare.

Yeah it's expensive so might switch to another CPU, but i could just go with the 5800x, i don't mind spending a bit more yk.

Same, i don't need that many SATA ports at all lol.