Post your beautiful (and not so beautiful) tattoos! What inspired them? Where are they going?

I have an FFVIII tattoo. This was the first game that inspired me and probably shaped my entire adult future and would explain why I'm such a massive emo kid these days. I think that tattoo is quite rubbish but 10 years ago, 19-year-old me could not wait to afford good tattoos, they needed any tattoo they could get (this is not the worst tattoo I have). One day, I'll get it filled in with an image of a white feather floating in a field with Griever being the outline of it.

I have Tyris Flare on my leg. Could probably do with a touch up to make the outline a bit stronger but I won a tattoo session and decided I'm gonna start covering my leg in all of the games I remember playing as a kid, Golden Axe is my oldest memory of gaming. I think Alex Kidd will be the next one added.

I've got a bunch of ideologies on my knuckles that represent my beliefs in life, one of them is a heart container from Zelda that represents both gaming and love.

I have a Portal tattoo that I can't exactly take a picture of because it's on my back, but it's just the Aperture logo. No words, just the little shutter. Everyone thinks I'm into photography. D'oh.

Also have this sucker on my forearm, a sperm whale skull because I read and enjoyed Moby Dick. Wild, I know. Planning a new tattoo now though!

I've posted these online several times before, but these are far and away my best tattoos. I also have full a sleeve w/ some Dota, Spelunky, Fallout and Elder Scrolls stuff. These two monstrosities are on opposite legs.

angry tuna said:
I've posted these online several times before, but these are far and away my best tattoos. I also have full a sleeve w/ some Dota, Spelunky, Fallout and Elder Scrolls stuff. These two monstrosities are on opposite legs.
Click to expand...

Good god, I love them.

I've had people spot my Griever tattoo and say with no hint of a joke, "Why do you have a tattoo of Africa on your arm?"


angry tuna said:
These two monstrosities are on opposite legs.
Click to expand...

The colour on the Mario tattoo is phenomenal.

I have many more, but my Astro Boy (Mighty Atom, 鉄腕アトム, Tetsuwan Atomu) happens to be the most relevant for this thread. 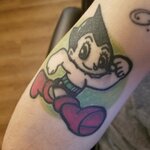 Nomad Fomalhaut said:
The colour on the Mario tattoo is phenomenal.
Click to expand...

Thanks, friend. Both were done by Tim Stafford in Austin, Texas. Great guy, great artist.
Reactions: Nomad Fomalhaut and SWard

I have 2 gaming tattoo just now and another hopefully soon.

First one is Good King Moggle Mog XII. I alway loved final fantasy and mmo's so when a realm reborn came out you bet I played it . I also alway love moogles in final fantasy so when good king mog came out I had mine heart on getting his moogle bow.

After months of trying to get it (saddly even when I did see it ,mine rolls were bad 😅 ) mine fc did the most amazing surpise for mine birthday. A group of them without me knowing book holiday day off and set up a group who would just keep doing him that day till it finally drop. I then both to make sure I never forgot how awesome they were and because I loved moogles got that tattoo.

Mine secound one is from eve valkyrie one of the most amazing, loving and best gaming community's I ever got the chance to be in with @sward here being the best community manger ever for it ( what it true ) .I made so many freinds ,have so many amazing memories and got to do stuff I never thought I would do .

I was a support player mostly so the back logo is the support symbol . The main part of the tattoo is of a spider bot what was use in one of the support ship and I loved them . Haha how to explain a spider bot they were like michaninal spider that could heal or hart a ship. They were hated and loved by the community and there was a bug were one would ever so ever go though the ship glass onto your face 😂.

next gaming tattoo I imagine may be a night elf boomkin (moonkin).This would be to remember time with wow both in game and the rl stuff I got to do with it. Also as it seems I meet one of mine best freind at a rl event before we came rl best freind thanks to eve online and eve valkyrie later down the line ( it a small world it seems )

angry tuna said:
I've posted these online several times before, but these are far and away my best tattoos. I also have full a sleeve w/ some Dota, Spelunky, Fallout and Elder Scrolls stuff. These two monstrosities are on opposite legs.
Click to expand...