If choice, do you play Same or Different Gender?

I'll play a female if available for the visual appeal whenever she's on screen—latest being Far Cry 5 & New Dawn. I don't play games with romance in them, but if I did, then I'd pick a male character. Do I win the older male Trad prize?

How about you?
Reactions: Frindis, Kaamos_Llama, Alm and 2 others

I don't have a preference I don't think, depends on the game.
Reactions: mainer

Good topic and an interesting question. For me, it varies mostly on the particular game I'm playing. Some games don't give you a choice: like the Witcher games your protagonist is always male, and in the Tomb Raider games, always female.

I play, and replay, the Mass Effect and Dragon Age series quite frequently, and those games have strongly developed romantic interest-type storylines. In those cases, I always play a male character, as I just wouldn't be comfortable for me otherwise. I will say that I've been temped to play a female Commander Shepard just to experience the voice acting of Jennifer Hale, as I greatly respect her work.

Other games, that don't have a romance story line, it can vary. Like yourself, I sometimes do it for the visual appeal. I'm currently playing Kingdom's of Amalur Re-Recoking, pursuing the rogue fate branch, and chose to play as female, mostly for the visual appeal, as that choice has no affect at all on abilities. There's even a Steam Achievement to be had if you have a conversation in game while being naked. I should add that this is for both male or female characters, and unclothed characters still have their underwear on.

Then there are games, like Diablo 1 & 2 and Sacred 1 & 2, where gender choice affects who your character is and the abilities they have. I love playing the Amazon character in those Diablo games because I really loved the character builds and combat abilities. In the Sacred games, the majority of the time I've played as a Seraphim for the same reasons. Those choices really didn't have anything to do with the visual appeal, but more on the combat abilities and how I like to play.
Reactions: Brian Boru, Ryzengang and Pifanjr

mainer said:
Those choices really didn't have anything to do with the visual appeal, but more on the combat abilities and how I like to play.
Click to expand...

lol. yes, Seraphim has nothing to do with appearance (although you are right in that there are no male Seraphim, I suspect lots of players play her because of what she looks like). ALmost all Sacred 2 videos are about her or Magician... both the female classes in game. 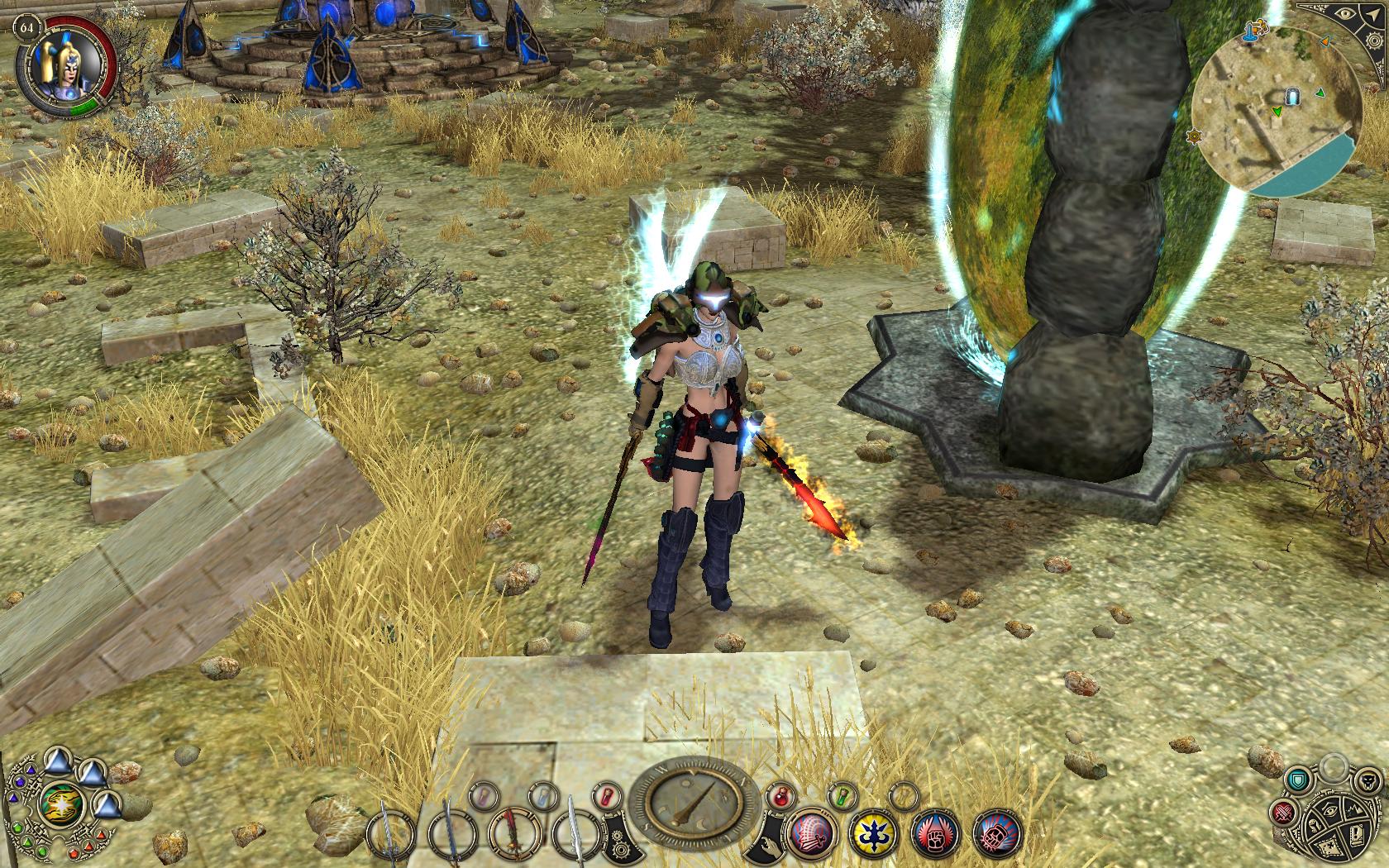 image from a time long ago I've always chosen to play as male if the choice was purely aesthetic, as far as I remember. I also usually let them look as much like me as I can, if possible, especially on the first playthrough.
Reactions: Alm

I'm the same as Pifanjr. I don't mind playing female characters, but given the choice I'll try and recreate myself in the game.
Reactions: Pifanjr and Johnway

Male and female, I create them... more female than male - but I'm forced to play males more than females in other games, so it might balance out. More or less.

Watch Dogs: Legion has been tricky that way. You gather party members by checking the info of random folks on the street. Strangely enough, I seem to be checking out the women more than the men. Thus, I find more exceptional women than men. Thus, I've got more women in DedSec.

Alm said:
I'm the same as Pifanjr. I don't mind playing female characters, but given the choice I'll try and recreate myself in the game.
Click to expand...

Female characters are fine, but I like to roleplay even in non-RPG's, and so I prefer to play males. As an example of my roleplaying, this Car Mechanic Sim I keep talking about, you don't really have a character, just a first person camera, but I'm still roleplaying as the world's greatest mechanic . I just kind of make up little stories about each car that comes in or picture a person in my head (since customers don't show up either) as bringing the car in. Usually, I pretend they are poor, and I'm trying to save them money by either fixing parts or using parts I had from other cars or from trips to the junkyard. Doesn't matter if I've used the same story 10 times in a row. It makes it fun. Since I pretty much do this in every game, I'd rather the character be like me: male.
Last edited: Sep 12, 2021
Reactions: mainer, Brian Boru and Pifanjr

mainer said:
choice has no affect at all on abilities
Click to expand...

Oh, I didn't realize abilities could change with gender. Or do you mean certain classes might be one gender only, and you wanted to play as that class?


Pifanjr said:
I also usually let them look as much like me as I can
Click to expand...

I wanted to do that too, but all the avatars were good-looking
Reactions: mainer and Pifanjr
C

I will use same gender, like in real life

I honestly try to make my characters look like me in game, so i tend to stay male thats bald and has a big beard, they look cool to me in games anyways lol.

I have picked opposite sex before, in COD:BLOPS Cold War i actually picked the gender fluid option it has.

I also remember playing the original Rainbow Six Vegas online with the female because the actual female frame in the game was smaller than the males, so it was harder to hit.
Reactions: Brian Boru and Pifanjr

I usually look up if one of the characters is canon to the story and if the others feel tacked on. I don't know what percentage of games I play as different genders, but what I do know is if it's a male character I try to make them look like me, and if it's a female character I just go with features I find attractive (not to sound creepy - but if I'm going to look at them all game it might as well be my imaginary mistress amirite?)
Reactions: mainer, Frindis, Pifanjr and 2 others

If it is a game with good visuals and tight clothing, you bet I am going to play a female 😁 Mass Effect 2, Cyberpunk 2077, Dead or Alive 5, Saints Row: The Third and Assasin Creed Odyssey are some games where for me a female is the obvious choice. Skyrim with heavily invested female mods is also pretty darn good. I say praise the female and male anatomy down to the minuscule detail. I tip my hat to CDPR for at least trying to be a little edgy in that aspect, though the body customization was pretty meager compared to what was promised. I guess it is a start thinking that game characters can look like something more than anatomically impaired Ken dolls.
Last edited: Sep 14, 2021
Reactions: Pifanjr, Brian Boru, mainer and 1 other person

Brian Boru said:
Oh, I didn't realize abilities could change with gender. Or do you mean certain classes might be one gender only, and you wanted to play as that class?
Click to expand...

Sometime I don't explain very well what my brain is actually thinking. You're correct, what I was trying to say, is that in some games (like the Diablo & Sacred games) certain classes are one gender only, like the Amazon in Diablo & Seraphim in Sacred. I play those classes, not because they are female, but because of the abilities and character builds suit me best when playing. Thanks for correctly interpreting.
Reactions: Pifanjr and Brian Boru
M

I will use the same gender

Saints Row: The Third would let you switch whenever you wanted. I played female boss most of the time, but I switched to male sometimes, just for the change of pace or because it seemed to fit the story better. Got an achievement for it, too!
Reactions: Frindis and Pifanjr
You must log in or register to reply here.
Share:
Facebook Twitter Reddit Tumblr WhatsApp Email Link