Post a pic, maybe some info about the place you visited or perhaps you just want to hang out and enjoy the scenery. Ps: A small tip that might help you in taking some photos: You can stop the plane by pressing the PauseBreak key. This will make it possible to use the drone for some shots that might not be possible if the plane was moving.

Looking forward to seeing what you guys come up with

My adventure today starts in Lofoten, a beautiful chain of small islands at Nordland county in Norway. Well known for the seasonal houses used by fishermen and tourists and for breathtaking vistas. Fishing is a big part of the economy and if you ever stop by, you have to try the salted/dried clipfish.

Røst (Rost) from the screenshot below is the first of these chains of small island and located northeast: 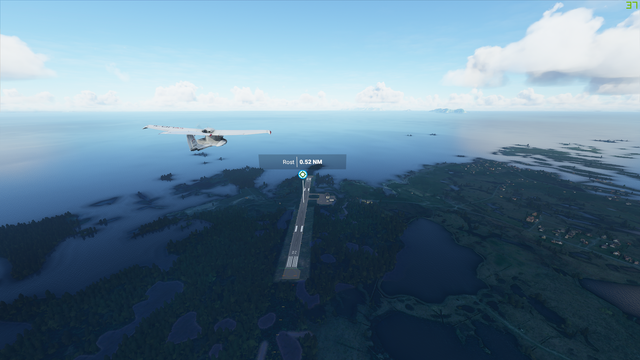 The second picture shows some of these small islands as we fly towards the northwestern parts of Lofoten: 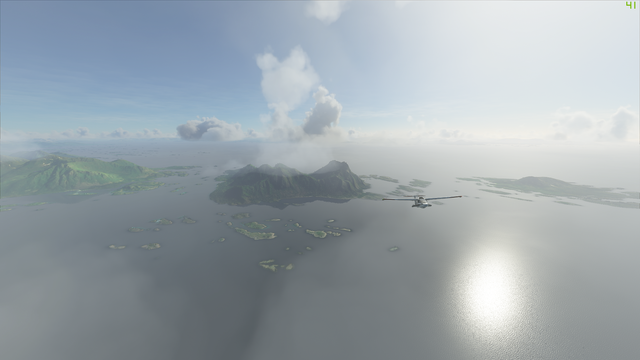 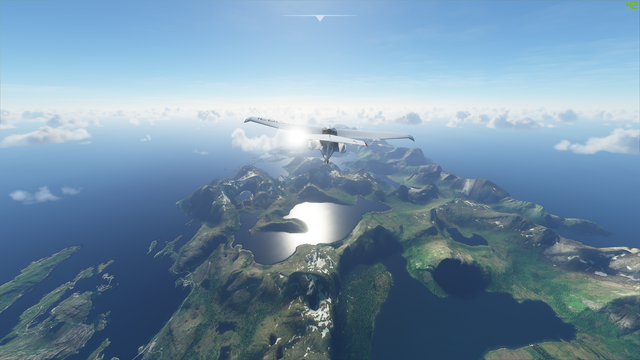 Stretching the legs a little: 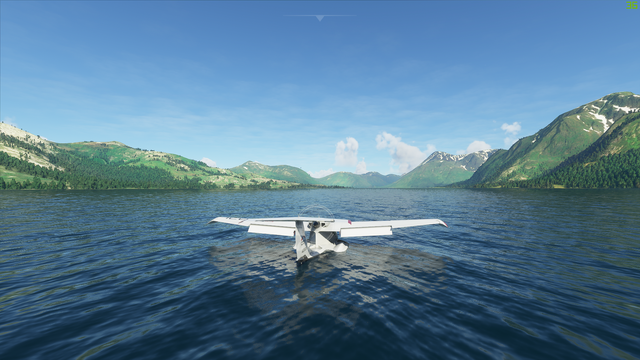 Leaving an airport called Leknes roughly 1/3 of the way through Lofoten and my last screenshot as I managed to doze off and crash the plane in one of the many fjords: 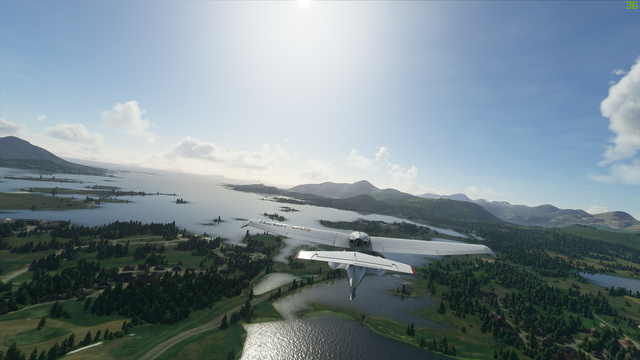 I wish you would post more of these, maybe add some shots of the in-flight map / navigation to show us the route you took. I love looking at this game, even if it's just static images. Actually, the stills might be even more impressive than videos most of the time. It's just such a looker of a game.
Reactions: Frindis

@Rensje I will be following up with some pictures soon. I actually had one almost ready for my Dovre (Norway) visit, but the draft disappeared. I'll try to include some google earth waypoints, as including it in the game is a bit tricky right now (at least from my knowledge).
Last edited: Aug 31, 2020
Reactions: Rensje

Today I will show you a little slice of Dovrefjell (and the largest mountain Snøhetta), a border between the northern and southern parts of Norway and a part of Dovre county. A very popular location to visit on the train or on foot. If you are very keen on doing a bit of walking, you can take a part of the Pilgrim´s Route (The Old Kings´Road) which goes over the Dovrefjell mountains. Dovre got some of the best sour cream waffles in the world which are sold at Dovregubbens Hall. Yes, it is the same name as the famous piece by Edvard Grieg: I Dovregubbens hall, also knowns as: In The Hall of The Mountain King. If you are lucky, you might also get an eye on some of the Muskox roaming around the landscape in Dovre/Dovrefjell. They are basically big shaggy prehistoric animals that are quite calm, BUT, do not ever try to pet one or they will eat you alive! Maybe a bit exaggerating there., so let us fly instead:

First things first: Here is a map over the location I am traveling. You type in Bjorli Airstrip, set it as departure, and slowly turn your plane to the east. Then it is pretty much a straight line over Aursjøen (The worm looking lake on the map) and to Snøhetta. Pressing V will show you the mini-map, which looks similar to the map here, so you will easily see the different landmarks. 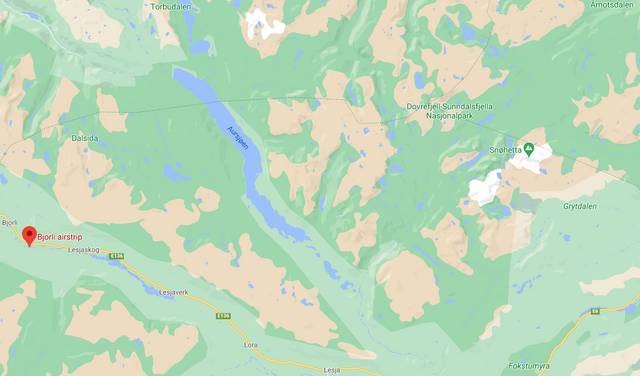 After lifting off from Bjorli Airstrip, early in the morning. The picture is a bit boring, but I just started drinking my coffee, so bear with me. 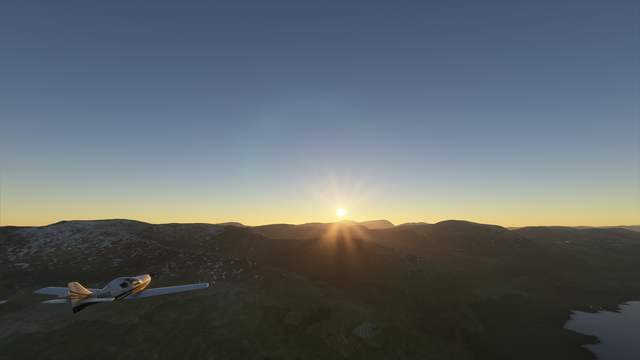 Getting a little closer to Snøhetta now and I have already passed Aursjøen. As you can see the weather is quite nice and the sun has just begun reflecting on the snow's surface. According to the local weather station, it will get a bit cloudy as we reach Snøhetta mountain and the time of the day may or may not change due to a sudden change in the space-time continuum. 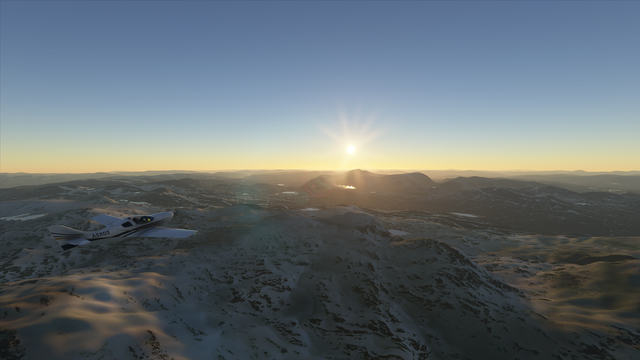 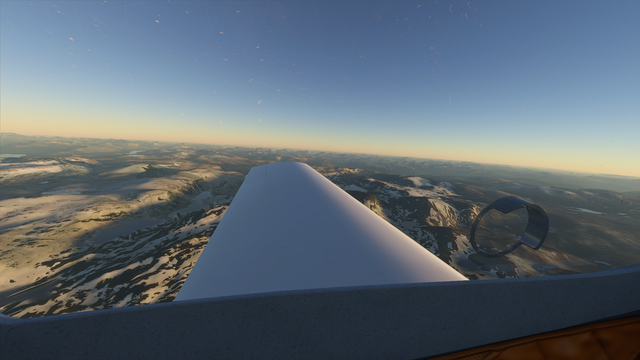 We finally arrive at Snøhetta as the clouds are gently playing on the peaks. Four peaks to be precise, and they are named Vesttoppen, Hettpiggen, Midttoppen, and Stortoppen (the highest one at 2,286 meters) It is the 24th highest peak in Norway. Guess why it is called Snøhetta? I'll give you a hint: Snow is called snø in Norwegian and Hood is called Hette. Hope you all had a pleasant flight and see you soon! 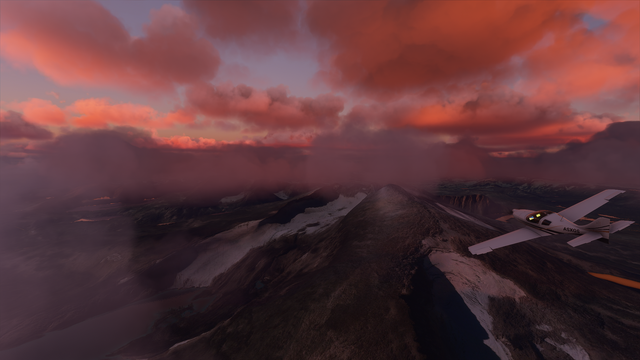 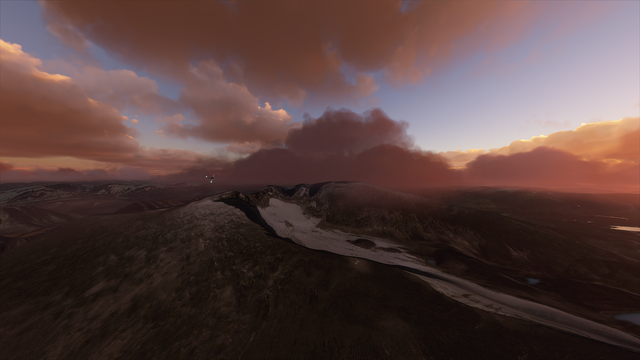