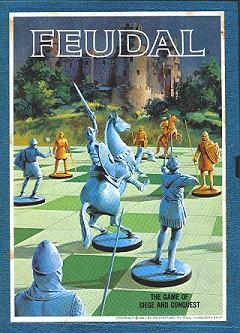 Anyone ever play this game? It's an oldie... published in the 60's. It sort of plays like chess. For the longest time my father and I played it just like chess, moving one piece at a time. This works, but the rulebook actually states that a player can move all their pieces in their turn. That combined with the castle, royalty, and terrain mechanics make it feel more like playing a real time strategy game. There is a module for this in Tabletop Simulator, but I would love to see a competent mobile version. It would also be neat to see a feature in an electronic version of the game where the terrain is more randomized. If you ever happen to run in to one at say, a garage sale or thrift store, definitely grab it!
You must log in or register to reply here.
Share:
Facebook Twitter Reddit Tumblr WhatsApp Email Link