I assume it goes here, or in Board games, its sort of either.

This isn't a review, I just noticed no one had mentioned it yet and I have been playing for a week.

Its an strategic village building board game where you are given 30+ tiles/tokens to use to make your map, aim of game is to survive as long as possible.
Its also difficult to explain adequately with words

I was watching someone else play and he seemed to take way too long between goes, so I thought, I can do this... after buying game and playing for a day or so my respect for his approach returned. As my high score is only 11k and his is 71k. Its not as simple as trailer suggests. Unless they are playing the creative mode that isn't in game yet. 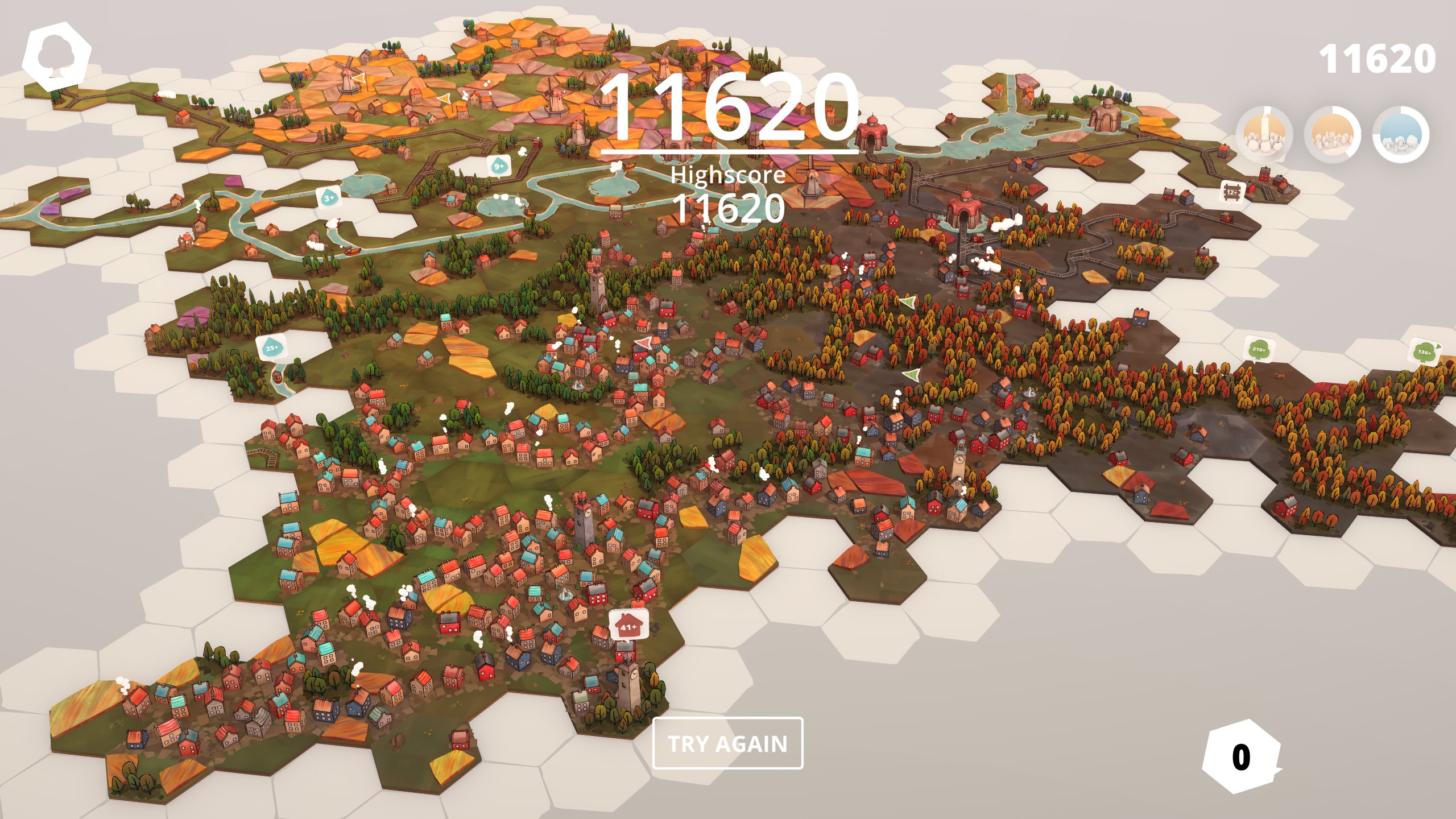 Each hex shaped tile makes up the map, you literally create it as you go.

You only start with 30 tiles and there are only 2 ways to get more, complete quests and get perfect placement of tiles.

There are quests to say, make a town with 200 houses, and some quests let you go over the number and others fail if you do. reward is 5 more tiles & 100 points. Early on quests are easy and you can get stacks of 80+ tiles pretty easy, but at about 5k score it starts to get harder. Ideal game play is to match every tile to its surroundings so you get perfect matches, and are rewarded with 1 extra tile and 60 points. Its not a high scoring game, base score is 10 points even if you don't match surrounding tiles. Ideally you want to match everything but I suspect the number of possible tiles in stack is pretty high. As such, it takes time to match everything as well as you can. That or you don't last long.

Or should I say, possible items found on tiles, as you often get multiple, most common being trees and a house or two, maybe a Farm. I often seem to have pieces that look the same. Worst type of combo is River/rail as these 2 items act as restrictive agents to obstruct your score/ constrict your growth.

Rail & river tiles block the tile spots in front and behind them, so often I will restart right away if within first 3 tiles is 1 rail and 1 river because at start of game, only 1 tile placed down and I always prefer distance between rivers/rails and my farms/houses.

The main strategy element is pre planning and not putting something down that blocks another quest from completing.

Thanks for that, nice write-up

I already have it wishlisted on Steam, it looks to have the Carcassonne vibe—one of my favorite board games, it should be nice to play it solo.

If anyone cares, the name means Romantic Village.
Reactions: Bonkcoituz and Pifanjr

I've played too much Dwarf Fortress. It didn't even occur to me this game wasn't about Dwarfs.

I seem to be going backwards, I think i need a break for a while.

Could be dwarfs, you don't see any people so maybe
Reactions: Pifanjr

One thing i hope they change before release is how it handles challenges.

There are challenges for achieving certain scores or doing certain actions in the game, but they are only active if they are one of 3 challenges assigned to the game when you start game. the 3 circles in top right of above screenshot are the only challenges active in that game. They change on restart, and should rotate through all of them (except I always seem to have the same ones now)

One challenge is "Get a score of 5k at least 15 times"... I have done that in the first few days but as Challenge is never active, you can't beat it.

They all should be live when you play. I have heard people who got to 30k just to finally get the challenge to get 5k. Something is broken in the triggers.

Challenges are tied to trophies,. I don't really care about them since they not real. It still helps if they work right (this statement seems familiar)
Reactions: Brian Boru and Pifanjr

I'm really interested in this looks like its up my alley. I've wishlisted it to buy on release, thanks!

I bought this on day one and have loved it. It's like a mix of Islanders and Carcassonne. Very chill.
Reactions: Pifanjr

This game has piqued my interest since I first saw it.

It reminds me a lot of an old Ravensburger board game called Rivers, Roads & Rails. Players are dealt tiles and have to match them up to other players tiles. The goal is to be the first out of tiles.