This is my first post, nice to e-meet y'all!

It's about time for my next build and I've been lurking all over the other build threads.
I found a prebuilt system with the specs that fit my budget: 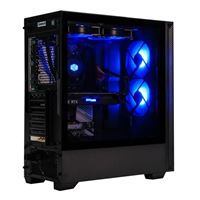 Buying the individual parts in this build are $200+ more than the price they're selling it for:

pcpartpicker.com
Let alone they have an "open box" for $1170 where I have family in CO...

The reviews looks really positive on the website.
Has anyone picked up one of these?
What do you think?

E-meetings are all the rage these days! Hi

The spec seems fine. Not clear what they're using as a PSU but the PowerSpec site claims its 80+ bronze, so hopefully not nobrand garbage. Case is probably poor for airflow but for that price, fine, whatever, run it with the side panel off or install it into a new case if required.

Make sure to check the seller's terms for 'open box' items. Does it mean you're buying with little or no warranty cover? For instance. Even if so you might decide it's worth it, but be sure you know what the terms are first.

What monitor are you going to get to go with it?
Reactions: DarkenGS
D

Thanks Oussebon! I'm toying with the idea of getting a horizontal case, adding in a blue-ray and sitting it all on the desk as a monitor stand. Looking at 144hz monitors and the LG GL850 seems to be the best. It's weird though as they seem to be kind of sold out. Any recommendations?
D

The LG 27GL850 is the wide colour gamut version of the LG27GL83-B. Same panel and performance apart from that AFAIK. The LG nano IPS panel currently has the fastest response times for an IPS on the market according to reviews. There's also the Lenovo Y27q-20 featuring the same screen panel. The one problem is you will have a below average black levels even for an IPS screen, although the response times are better than anything else IPS on the market, and rivalling some TN screens.

Another option is the Asus TUF VG27AQ which features ULMB (ultra low motion blur) concurrently with Gsync/freesync compatibility and a slightly higher max refresh rate at 165hz. Many monitors offer one or the other but this one does it at the same time. However according to reviews its suffers from colour overshoot and blurriness at frame rates lower than 100hz. If you can keep it going faster than 100HZ at all time its not such an issue.

A slightly cheaper option is the Viewsonic VX2758-2KP-MHD, it doesnt review as well as those mentioned above but comes in cheaper overall and is decent.

Edit: I should have mentioned the Pixio PX7 Prime. I didnt consider it too much because it wasnt available for me at the time I was buying. The stand is aparently not the best but the screen is of good quality, although not as good for gaming as the LG's its also a bit cheaper normally.

The above is the result of my research which lead me to buy the LG 27GL850 in the end. I didnt consider VA based screens though, because I prefer response times over black levels. And I found the LG 27GL850 on Amazon for basically the same price as the slightly lower specced 27GL83-B
Last edited: Apr 13, 2020
Reactions: DarkenGS and Zoid
D

Kaamos, this is awesome info. Thank you! Pixio is MIA as I'm writing too. I stumbled upon the Gigabyte Aorus FI27Q in my research and it had great reviews but was even more expensive than either the LGs or the Asus. I found the LG 27GL83-B for $375 on Amazon. The Asus TUF seems to eek out better review scores but it's also about $60 more right now. How much did you find the LG 27GL83-B for?

DarkenGS said:
Kaamos, this is awesome info. Thank you! Pixio is MIA as I'm writing too. I stumbled upon the Gigabyte Aorus FI27Q in my research and it had great reviews but was even more expensive than either the LGs or the Asus. I found the LG 27GL83-B for $375 on Amazon. The Asus TUF seems to eek out better review scores but it's also about $60 more right now. How much did you find the LG 27GL83-B for?
Click to expand...

No problem. I also forgot to mention the Gigabyte, I didnt look into it too much as it was a bit more than I wanted to spend as you said.

I'm in Europe, I got the 27GL850 for 500 euros and the GL83-B was 480. Apparently some people dont like the colour effect of the wide gamut and actually prefer the GL83-B without it. So that might be worth you looking into.

I think all the monitors we have mentioned in the last couple of posts are pretty good, and you could make an argument for all of them based on your preference and budget.

I wanted an LGGL850/GL83-B in the end because the response times are the best out of all of them. Although it doesnt feature any black frame insertion (ULMB) equivalent like a lot of panels, I understood this was redundant because the panel is just so fast anyway. 1ms is a bit misleading as I'm sure you read already though.

I was also a bit concerned about the performance of the Asus TUF at lower frame rates, and the cross talk with ULMB on. Without ULMB it seemed to me the LG is the better gaming panel, so I went with that. Some places do seem to prefer the TUF as an overall panel though.

lowest priced RTX 2070 Super on Newegg is $500 ... almost 1/2 the price of that complete build you posted. Word to the wise: must be a good reason why that build with those specs is only $1200
You must log in or register to reply here.
Share:
Facebook Twitter Reddit Tumblr WhatsApp Email Link