I need to buy a gaming laptop that can make the most use of a 240hz monitor such as the LG 27GN750-B. Thats probably the one I will go for.

Thank you for your recommendations!

I hope nobody here said that

For a laptop of this budget level and for high refresh gaming, 3000Mhz RAM might be both realistic and desirable. But saying abstractly that it's 'required for 240hz' is wrong on so many levels.

What games are you intending to play, at what sorts of settings?

How portable do you need the laptop to be? Are you taking it with you everywhere, all day, or is something quite bulky viable?
M

Oussebon said:
I hope nobody here said that

For a laptop of this budget level and for high refresh gaming, 3000Mhz RAM might be both realistic and desirable. But saying abstractly that it's 'required for 240hz' is wrong on so many levels.

What games are you intending to play, at what sorts of settings?

How portable do you need the laptop to be? Are you taking it with you everywhere, all day, or is something quite bulky viable?
Click to expand...

Currently Im just playing Path of Exile and afterwards probably want to try the new total war (three kingdoms). Others may be Smite, Heroes of the Storm, The division

I dont need portability but would prefer as close to quiet gaming as possible.

My first question based on that would be whether you're sure a 240hz 1080p monitor is the right fit?

Those monitors are favoured in competitive twitch shooters, but for a mix of games including things like modern TW titles and The Division you might prefer 1440p 144hz for the extra pixels and sharper image they deliver.

You might well be sure it's for you, and have already considered all alternatives, but I gotta ask
M

Thanks for asking. I have a very limited schedule and just dont have time to research this unfortunately. Honestly I just got so fed up with playing on my 16" macbook pro with all of its bootcamp errors and constantly having to switch from mac to windows that I did some brief looking around online and came up with 240hz being the best gaming experience today so I found this monitor LG 27GN750-B and am trying to get a laptop that can make the most use of the 240hz. Im not stuck on this monitor though especially if you think its not really for me. Please feel free to make any other recommendations. Thank you!
Reactions: Frindis
M

Hi again, I think Im going to just go with the ROG Zephyrus S17. That should be able to handle pretty much everything I play right? What would be a good monitor to pair that with?

There is no single best gaming experience, as a lot of it is down to personal preference, also potentially influenced by game genre preferences.

The 'sweet spot' is often considered to be 1440p 144hz - in that you get a much higher resolution than 1080p, but it's not nearly as demanding as 4k and you can keep framerates higher (and you don't need as beefy a setup to run it). Maybe take a quick look at the LG 27GL850-B, which is the same family as the one you mentioned above, but is 1440p. It's one of the best gaming monitors out there and if you google you'll find wall to wall reviews of it. e.g. The LG 27GL850 is currently one of the most popular and hotly requested gaming monitors in the market, but what makes it so special? It is the...

There's also 1440p ultrawide, which are those really wide curved screens you may have seen. (also from the LG Nano-I{PS family) Also, laptops sometimes have "Max-Q" graphics cards. These are basically weaker versions of the mobile card.

OEMs may also set power limits for processors and graphics cards differently, which can impact performance. The RTX 2080 Super ('normal' laptop version) is aboit 15% faster than the Max-Q.

To get a very rough sense of the relative performance of mobile GPUs, have a look at:

You'll notice some anomalies on there (eg RTX 2080 Mobile often performs higher than RTX 2080 Super). That's partly because unlike with desktops, you can't just measure performance of a single component in a laptop, you're inherently measuring the whole system . Maybe they have different CPUs, maybe one doesn't cool very well. Also the systems might have been benched with different Windows or driver versions, possibly.

At the $3000 range, there are laptops that carry full-fat desktop (-S series) CPUs. They are pretty large beasts, and probably not worth the expense.

The ROG Zephyrus, assuming that's the variant with the RTX 2080 Super and a ~$3000 price tag is - as with anything that has ROG in the name - vastly expensive. It's anywhere in the range of $500-$1000 more than a similar laptop from another company.

I'd suggest looking at custom spec laptops, which use chassis from people like Clevo (known as Sager in the US apparently), Tongfang, Quanta, etc Arguably not worth the premium over a laptop that offers a 2080 Super Max-Q for ~$2300, but it's viable within the budget.
Reactions: Frindis
M

This has been super informative, thank you very much for taking the time.


Oussebon said:
At the $3000 range, there are laptops that carry full-fat desktop (-S series) CPUs. They are pretty large beasts, and probably not worth the expense.
Click to expand...

I won't be moving it around to much so size is not an issue for me. The SAGER you suggested with RTX 2080 Super and an INTEL® CORE™ I7-10700K sounds like an absolute beast and Im very tempted.

Oussebon said:
The ROG Zephyrus, assuming that's the variant with the RTX 2080 Super and a ~$3000 price tag is - as with anything that has ROG in the name - vastly expensive. It's anywhere in the range of $500-$1000 more than a similar laptop from another company.
Click to expand...

I see. What exactly is the premium for other then name? The thermal performance?

At this any of these sounds good to me. I have to use it in a room with a sleeping toddler so I really want to leave it to noise levels at this point. Will the fat laptops run quieter or is does the Zephyrus really have something in terms of better heat management and less noise with liquid metal and all that they advertise?

Thanks again for the suggestions they really helped me out.
Last edited: Aug 15, 2020
Reactions: Frindis

mithcol1234 said:
I see. What exactly is the premium for other then name? The thermal performance?
Click to expand...

Price premiums can be for all kinds of things. Thinness, screen quality, a narrow screen bezel, keyboard experience, features like Thunderbolt, or gsync. And the brand name. Sometimes it's largely the brand name.

I don't know which for the Zephyrus. My personal approach would be to assume the price isn't justified until presented with evidence that it is. The term Asus Tax exists for a reason, and isn't exclusive to motherboards and/or GPUs.

Regarding noise, the Sager is unlikely to be quiet. But apparently the S17 hits 50 dBA, and the reviewer here says:

When idle, the fans constantly work at low speeds. The whole thing is reflected in a subtle noise. During the stress test, we measure a sound pressure level of 50 dB(A). It gets similarly loud when playing games: When performing our The Witcher 3 test, the GX701GXR reaches a level of 49 dB(A). The use of the included headset is almost indispensable.

From the inside of the laptop, a relatively loud electronic crackling can be heard in certain situations, which is drowned out by the noise of the fans at higher rotation speeds. 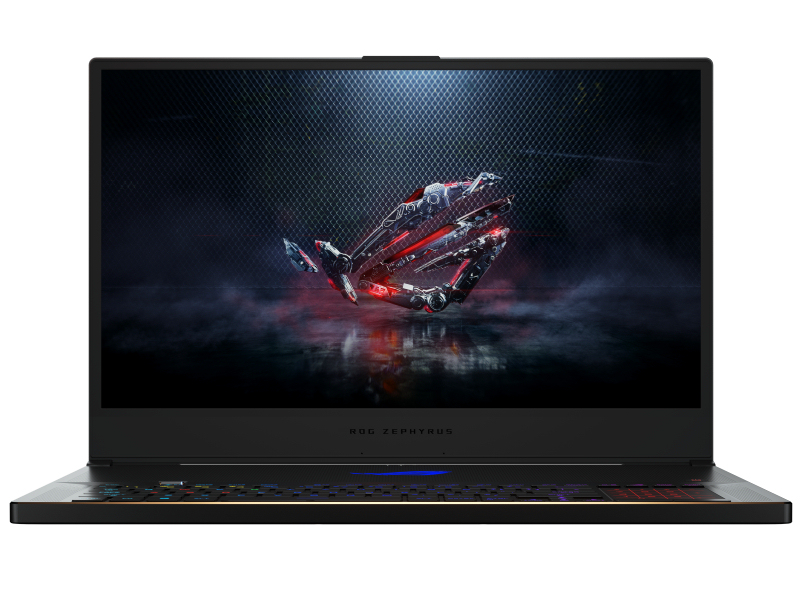 Which is not too surprising for any modern laptop, where the trend is to stuff as much powerful hardware into the thinnest possible chassis. And even beefier chassis like Clevo/Sager desktop replacement laptops then get even more powerful hardware stuffed in them, so don't end up quieter under heavy load.

Do you definitely need portable gaming?

What are your portability needs? Is it a case of taking the system around the home only, or on very occasional business trips?

With your budget you could probably get a powerful and reasonably not-noisy gaming PC, and a laptop (even capable of moderate gaming)

There are solutions to portable gaming around the home like Steam Remote Play, Nvidia + Moonlight, etc where you can run a desktop PC in one room, and play and control the game on a different device in a different room.
M

I change homes twice a year and fly internationally multiple times a year on long flights. I also have a small toddler and learned to make sacrifices with my belongings over the years to ease the transition each time. I considered an ITX build before but figured the laptop will be the easiest solution for my situation.

Thanks again for all your help.

If you're taking the monitor plus other stuff to a new home twice a year perhaps a mini ITX build wouldn't be so bad to transport alongside that? Along with a weaker laptop for using during the flights. A laptop with a GTX 1660 is only ~$1000 or so.

A mini ITX system having the further advantage(s) that you can upgrade components, and if they break replace individual components at relatively low cost.

I was having a look for system builders that do mini ITX builds in the US, but was struggling, certainly to find one that lets you pick a case like a Fractal Node 304. This https://www.letsbld.com/h1-mini-pc might be worth a look though.
Reactions: Frindis
M

Yes I looked into mini ITX builds and they are definitely very attractive but because my traveling is international it still does not make sense for me right now to get anything bigger then a laptop.

Another option, that also might not be ideal or the best answer but that is worth at least reviewing is game streaming services. Where you get a subscription with a company who runs the game on their hardware, and you stream and control it over the internet. Each one usually works a bit differently to the next (e.g. some have a catalogue of games included, others need you to already own the games on Steam, or to buy them on their platform). The main ones I know of are:
Playstation Now
Geforce Now
Shadow
Google Stadia
and MS are about to launch one too from September 15th I think

This could well be the quietest solution because your hardware is doing almost nothing, so doesn't need to spin the fans hard, and it could be the cheapest too. Disadvantages could be some fidelity loss from streaming, needing to be online with sufficient bandwidth / latency, and whether the service is available in your country.

I can link a couple of video pieces on Shadow and Stadia if it's of interest.

If that's no good, then we're back to the laptop with the potential issue of noise.

Your best bets to mitigate noise are probably to go with the better thermal paste, and to use a laptop cooling stand with fans built in.

And in extremis after getting the laptop, if the noise interferes with your kid's sleep, you can reduce settings and use free software to cap framerate. e.g. if your laptop pulls 80fps on ultra in a game, cap it to 60 and lower the settings to high/very high. Which reduces the load on the GPU, reducing the heat output, and so the fans could slow down.
You must log in or register to reply here.
Share:
Facebook Twitter Reddit Tumblr WhatsApp Email Link